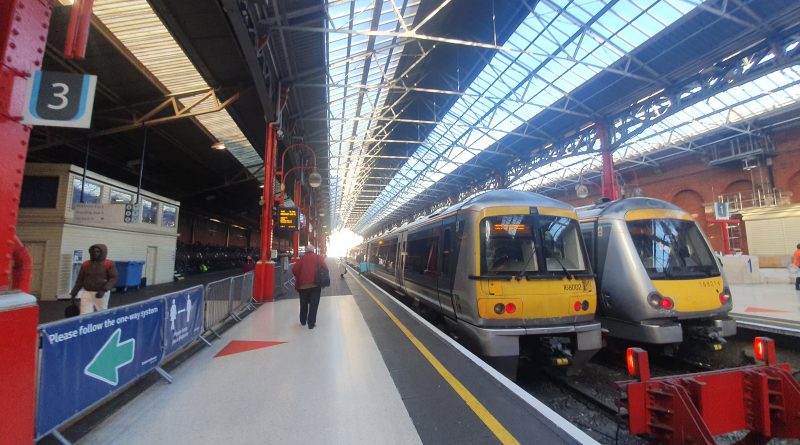 Back in London Marylebone, this time for a trip up to Warwick. I’ve written about Marylebone numerous times before, but I hadn’t noticed how much housing was demolished to construct it at the beginning of the twentieth century. The concourse of the railway station is where Harewood Square is on this map which is from just before the station was constructed. I was as early as ever arriving at the railway station, mine was the 12:34 to Birmingham Snow Hill. The platform number wasn’t announced until ten minutes before departure, which I didn’t think was ideal. It’s quite a pleasant little railway station to wait in and I meandered across to Pret to use my coffee subscription. There are numerous other coffee providers, free toilets, plenty of seating and a small selection of shops. There’s the Marylebone Thunderbolt on the left (my name for the service, it’s not the official name). Apparently this train is a British Rail Class 168 DMU train, but I had to look that up as I know nearly nothing about these matters. The trains though date from after privatisation, they were built from 1998 to service this route. The train was never really that busy and there were plenty of seats available. I got a table and access to a power supply which was handy. My ticket was checked by two different train guards, slightly unusual as I’ve recently rarely been asked to show my ticket at all. It’s a comfortable train, with spacious seats and it was clean throughout. And having safely arrived after a journey of just under 1 hour and 30 minutes. The railway station is located a ten-minute walk from the town centre, although there are buses for those who can’t be faffing about. And off the train goes to Birmingham. I was surprised that Warwick railway station wasn’t a little grander, it’s quite a minimal affair with limited facilities for customers.

As for the service, it was on time, the train was clean, the staff were polite and the seats were comfortable. The fare cost £10, so I have no cause to be anything other than happy with the arrangement.