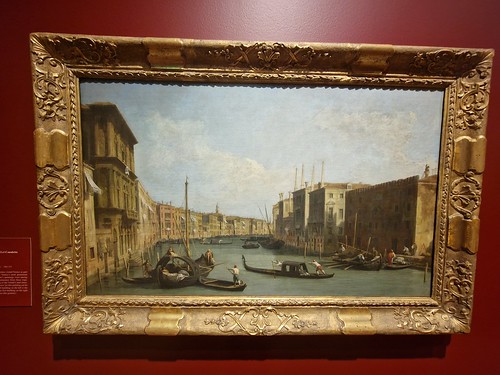 This is part of my running theme of trying to see as many of Canaletto’s artworks as possible, made rather more difficult by the scattering of his works around so many museums and galleries around the world. There is of course the immense depth of detail in his works and how they have captured a snapshot of Venice in time. But there’s something more exciting that they were often collected by those on their European Grand Tour, a chance for the upper classes to tour the continent in a bid to learn more about other countries and cultures.

What is attractive to me about this concept of the European Grand Tour is not just that it remains an interesting excursion and adventure today, but that it must have been something of a culture shock to the travellers at the time. I understand that the participants on these expensive tours were often wealthy and not exactly sheltered to culture, but there was no Lonely Planet guide or tourist services to advise on what museums to go to. These countries might have been used to travellers, but it was still rare enough not to be common and so there was little compromise on food, language or culture. That means these Grand Tours would have been a true adventure and I can see why it was something that many travellers looked back on with fondness throughout their lives. The travellers often had guides, or cicerones, to help them, but it would still have felt very different to what they were used to.

This is what would have certainly set the classes apart in the seventeenth and eighteenth centuries, as those fortunate enough to go travelling were expected to report back on their experiences. To anyone from the middle or working classes, they would have just had to listen and dream of doing similar. I’m sure many would have felt no connection or interest in travelling to countries such as Italy, but many must have equally felt quite jealous and wished they could see all of these things that were discussed. Unfortunately for them, there were no £9.99 fares available to Italy at the time with Ryanair.

But, I’ve digressed along another flight of fancy of mine. The painting, as I’ve mentioned, is by Canaletto (1697-1768) and was painted in the late 1720s, likely for someone on a Grand Tour to take home. The painting is another gift from the Samuel H Kress Foundation, something that I’ve already made reference to. The museum was given the artwork in 1961, but it had been in the hands of a private collection in England until 1931 and it had likely always been there since it was originally purchased. I don’t know, but perhaps it was handed down the generations following the original traveller and then they had to sell the painting as part of the great sell off of country houses and contents in the early twentieth century.

Regardless of its history though, it’s another wonderful painting that is as near to a photograph of eighteenth century Venice as we’re likely to get and I’m glad that Alabama has this in their state.