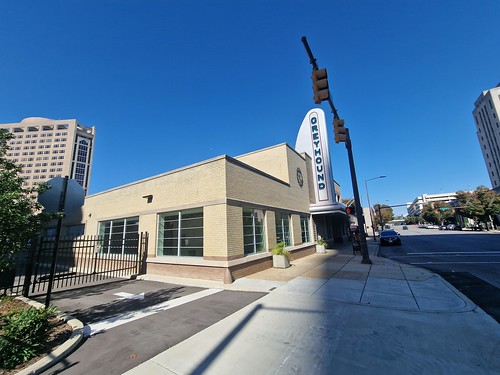 This is the former Greyhound bus terminal in Birmingham, no longer in operation as in 2017 they moved to the intermodal facility by the railway station. It was recently taken over by a developer who purchased it for just over $2 million and will be letting the building out for office space but he’s also making efforts to maintain the heritage. I’ve seen photos of this building before from when it was in use as the city’s main coach station, not least because of its important part in the civil rights story of Birmingham and I think it’s the first old style Greyhound construction that I’ve seen. 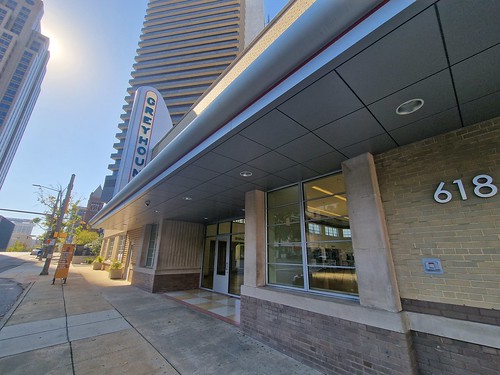 Following delays caused by the Second World War, the new bus terminal was finally constructed in 1950 and its an iconic structure which is very much part of the Greyhound design and I’m pleased that its look has been kept as part of the new development. There are some photos of the inside of the building taken by the local newspaper which show what is being kept, as well as some of the old Greyhound memorabilia that was still inside. They’ve even converted two old Greyhound buses and parked them out the back to use as office space and this would be a marvellous building to rent given its size and status.

But it’s not just the structure of the building that is important here, it’s the story of what happened here in 1961 which makes it so notable. The Freedom Riders, which had black and white passengers, set off from Washington DC to New Orleans on Greyhound and Trailways services to try and use segregated facilities as a protest against this divisive policy. Unfortunately, as expected, there was trouble in Alabama. The Greyhound bus was torched at Anniston and the Trailways bus was attacked when it reached at their bus terminal in Birmingham. Bull Connor, the racist so-called city Public Safety Commissioner, ordered the police to do nothing for 15 minutes.

This Greyhound bus station became part of the story as it was becoming apparent that the fear and terror directed towards drivers and the coaches meant that the Freedom Riders might not be able to continue. Volunteers came to the Greyhound station to the fury of Bull Connor who ordered police to arrest them. One of the 13 Freedom Riders on this trip was John Lewis, who died in 2020 after a long career in politics, and was one of the most important figures in the civil rights movement who was arrested at this Greyhound station. Lewis later said about the trip:

“We were determined not to let any act of violence keep us from our goal. We knew our lives could be threatened, but we had made up our minds not to turn back”.

The problems continued in Montgomery, Alabama and the former Greyhound bus station there is now the Freedom Rides Museum. Later that year, in November 1961, following immense political pressure there was confirmation from the courts that there shouldn’t be segregation on facilities provided at inter-state coach services. The Freedom Riders had been essential in forcing the southern states to comply, although it’s evident they did so with minimal willingness in very many cases. Their bravery is immensely impressive, they weren’t just faced with the KKK and their supporters attacking them, they also had to defend themselves whilst the police stood by.

I was standing outside the building on a warm day in October with the sun shining and everything feeling peaceful. The former bus terminal is located opposite City Hall and it’s hard to imagine the sheer terror that must have been felt by the Freedom Riders and to truly understand the ridiculous indignation of Bull Connor. But they were certainly socially different times and many in Alabama were fighting hard to try and maintain segregation, annoyed that national politicians were telling them to act against what they believed in. Connor was also supported by John M. Patterson, the Governor of Alabama, who was one of the leading proponents of segregation, although moved away from it later on in his political career and who only died in 2021. Yet against all that, the Freedom Riders still persisted, so very brave.