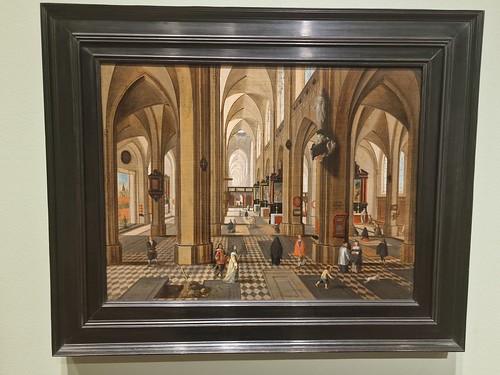 I’ll have to be careful not to spend several weeks writing about artworks at the Birmingham Museum of Art, but this was another of my favourites from their collections. It’s of Antwerp Cathedral and was painted by Pieter Neeffs the Younger (1620-1675/1685) in 1648. The panel by the painting at the gallery notes the tall painted altarpieces along the columns of the central nave and they look really rather glorious, it’s a shame that changes in taste and the Reformation movement saw much of this swept away. I’ve never been to Antwerp, but the panel also notes that some of these survive to this day, but some were lost as religious doctrine evolved. 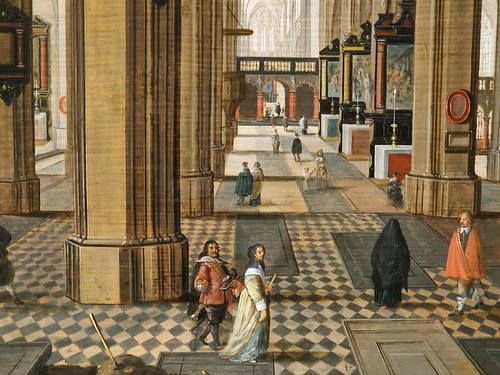 It’s the clarity of the painting that I like, there’s plenty to see when looking closely so there’s plenty of human interest. It’s also a reminder of the time before churches and cathedrals often cluttered up their naves with seating, something only recently being reversed in many religious buildings. Not quite visible in this bottom photo, but visible in the main image, but I like the gravedigger busy making preparations to what I assume is adding a body to a tomb. This isn’t the only painting that the artist made of the cathedral as I’ve seen others, but as he was a local it would have provided him with plenty of inspiration.

The painting was purchased with the help of the Art Fund and donations from Mr and Mrs William T Ratliff. There’s more about the artwork at https://www.artsbma.org/collection/interior-of-antwerp-cathedral/.