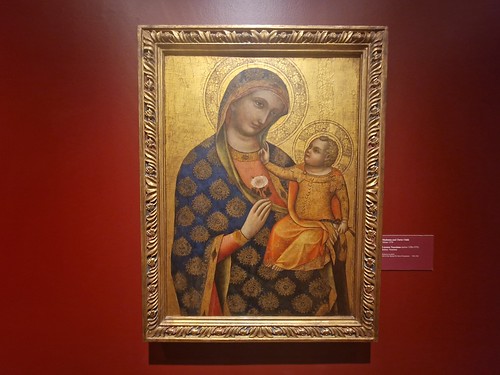 I remember standing in Birmingham thinking it felt quite odd for this Italian painting from around 1370 to have ended up in a room in a quiet museum in Alabama. The more recent part of this story is that it’s the legacy of Samuel H. Kress (1863-1955) who built up an immense collection of Italian paintings and then gave many of them away to museums up and down the United States in a bid to help educate and inform visitors. This museum received 34 paintings, 2 sculptures, 13 pieces of decorative furniture and 4 pieces of decorative art.

The formidable Birmingham Museum of Art has carefully placed its entire collection on-line, which makes it much easier to get an understanding of each of the artworks. This piece was on display at the National Gallery of Art in Washington DC between 1939 and 1952 before being returned to Kress who gifted it to the museum here in 1961. Prior to 1930 it was owned by Riccardo Gualino (1879-1964) of Monferrato who was an Italian business magnate and art collector. Where it had been since it was painted by Lorenzo Veneziano, a Venetian, in around 1370 the museum doesn’t know.

I don’t have sufficient knowledge of medieval art to be able to add much, although Bonhams recently sold a work of his for not far short of £2 million and they noted:

“A remarkably inventive artist of extraordinary talent, Lorenzo Veneziano was indisputably the leading Venetian painter of the second half of the 14th century and his impact on later Venetian painting was both profound and widespread. He was instrumental in instigating the significant move in Venetian art towards the Gothic style, turning away from those old fashioned Byzantine models that had previously dominated”.

What I have seen before, something I learned in Florence, is the blue colour used by Italian artists of this period and it’s derived from lapis lazuli. It was expensive to acquire and frequently used with the clothing worn by the Virgin Mary. To my untrained eye this is executed well and the face of the Virgin Mary has a depth of character to it. I get swept away with history too often when looking at artworks like this, I can’t help wondering where it has been for the last 700 years. I assume it was originally for a church or even for a private chapel, looked at for generations. Then a new audience would have been intrigued by it when it came to the United States and went on display in Washington DC.

There’s plenty more about this painting at https://kress.nga.gov/Detail/objects/3546.