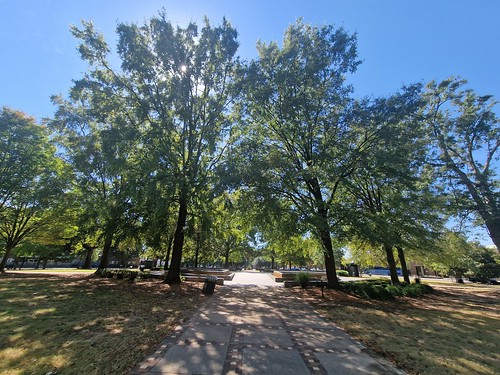 This was one of the disappointing elements of my trip and it’s the Birmingham Civil Rights Institute. I very much enjoyed visiting the National Civil Rights Museum in Memphis a few years ago and its tone, which seemed pitch perfect to me, part of my pilgrimage to the places that were key to the life of Martin Luther King. A few days before I was planning to visit this museum I checked their web-site to ensure that they didn’t need prior booking, but to my disappointment they had decided to ban bags and told visitors to leave them in their car.

I’m not entirely sure that any museum should just be assuming that everyone has a car, that’s really unfortunate language to be using that I’ve never seen before in any of the hundreds of web-sites I’ve checked before visiting other locations. But, that wasn’t really my concern and I have no desire to be critical of them, but the problem was that the museum weren’t accepting bags and I had one. Not a huge bag, but larger than what was allowed. There was nowhere obvious for me to leave my bag, the Amtrak station didn’t open until two hours before the train and I don’t think they had lockers anyway, I didn’t have a car and I didn’t have a hotel room in the city. Slightly disappointed, I just didn’t go, despite it being one of the museums I was deliberately planning to go to on my trip.

I’ll add though, in fairness to the museum, their web-site looks a little dated and I think their policy was perhaps updated quite quickly during the pandemic, so some of the text was likely making reference to that. I don’t know what their funding situation is like, but I imagine a new web-site project would be expensive and it’s difficult to ensure that everything is up-to-date in the way that it should be.

The story isn’t bad though, I instead went to the Birmingham Museum of Art which is a short walk away and I merrily spent three hours there. They do have a few lockers near to the entrance of that museum, but my bag didn’t fit. Instead, the lovely security officer said she’d look after it under her desk, which she did. When I was leaving I mentioned about the Civil Rights Institute bag policy and she so very kindly said I could leave my bag there at their museum whilst going to visit if I’d like to. That was a lovely gesture, but unfortunately I by then had other things to see and then a train to catch back to New Jersey.

I did contact the Civil Rights Institute and they changed their web-site, although didn’t reply to me, not that this mattered. It now transpires that they do have lockers and perhaps I should have just risked going anyway. A shame, but I had a lovely museum visit elsewhere and have been able to see some of the displays via photos that visitors have uploaded and I think based on that I’d still very much recommend a photo to the Civil Rights Institute as there look like there are plenty of interesting and thoughtful displays and exhibits. It’s also of course a cause that needs support and I think the museum is behind the wonderful civil rights marker boards placed around the city centre.

But that explains to anyone interested (which, I’ll add as I usually do, is likely no-one) why there will now be a series of posts about numerous different artworks. I did though visit the square outside of the museum, which is where the top photo is of, and thanks to the civil rights history markers laid out by the museum learned plenty about what happened and where in the city. More posts on that will follow in due course as I intend to complain quite a lot about the appalling treatment of the black population in the city, which is really the most important point here.