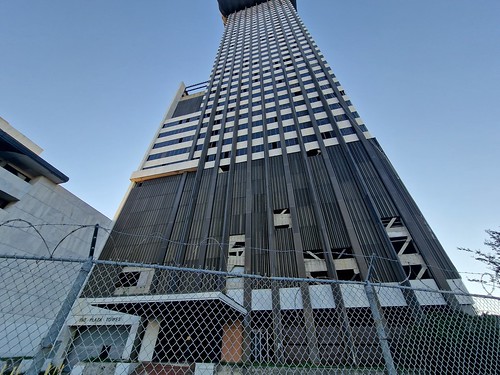 This delightful building was once really quite something, completed in 1969 and at the time the tallest building in New Orleans and Louisiana. Although there were a few residential floors at the top when it was constructed they had been turned back into offices by the early 1980s. It might have looked to be an almost luxurious working environment, but the building was riddled with asbestos, damp and mould by the end of the century, which wasn’t seen as ideal. In 2002, the final workers left the tower and there were plans to turn it into a residential building to be proud of.

There were plenty of plans and this was going to be a high-end residential structure once reconstructed, especially after the project to remove the asbestos and other things such as toxic mould which residents probably wouldn’t want in the corner of their apartment. This was all going well until the development company went bust in 2007 when the global economy deteriorated badly. It went on the market for over $15 million in 2010 and sold at auction the following year for $650,000. Bearing in mind they had expected to sell each flat for not much less than that, someone took a huge loss on this. But, what on earth can a developer do here as it’s likely cheaper to find a nearly empty lot and start afresh there rather than try and restore this mess of a building.

And there the building’s history comes to something of an end. Or at least, until May 2021 when a large bit fell off it. But they added some protective nets to the top and re-opened the area once again. Then the building caught fire, more bits fell off and that’s why there’s protective fencing now around it again. Indeed, just this week another big bit fell off the building so it seems a greater area of land is now fenced off since I was there in October 2022. I know that it requires quite a lot of imagination given how it looks now, but I see the graceful plans that the initial designers had in mind. There’s another question from this, which I’ve seen raised a few times, about how skyscrapers around the world can be repurposed once their life span is up. Unfortunately the current answer is too often to raze the building and construct a new one, but that’s not entirely environmentally sound.

I’m not brave enough (and indeed I don’t aspire to change this) to be an urban explorer of abandoned buildings, but these brave folks in the above video had a look inside. They noted during the video that it might be the tallest abandoned building in the United States, which doesn’t seem an unreasonable suggestion. It’s clear that many homeless people have used the structure over recent years, a tempting thought when the city’s homeless number is so high, but nonetheless it remains a dangerous building to be in for numerous reasons. I’m not sure what the future is for the structure, but it’ll take years of work and a lot of money to make it liveable and decent once again.