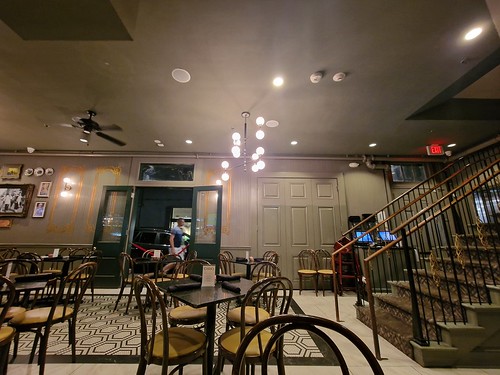 For anyone carefully paying attention to the blog about this US trip, I’d firstly congratulate you on bearing with it since it’s taking me literally months to finish writing this expedition up. Secondly, for anyone with excellent powers of recall, they might note that I mentioned I had to get $100 cash out to pay a deposit in the Travelodge in Las Vegas. This meant that I still had a chunk of it left and so I decided to take myself out to a decent (I’d add my definition of decent isn’t Michelin, it’s just one step up from Popeye’s) restaurant in New Orleans and just pay cash to get rid of it. I had a lie down on my hotel bed pondering why they hadn’t put more lights in the room and deciding that I’d book a table rather than risk not being able to get in somewhere. I opted for Curio and it was relatively busy, but they didn’t struggle to find me a table as is evident from the photo.

Actually, just to add some background to this, a large musical parade went by that window in front of my table just after I took this photo. There was banging, shouting and dancing, something I was pleased to discover was organised as until it went by I was starting to wonder whether there was a riot taking place. It’s New Orleans though, it’s part of the atmosphere. The dancing and parades I mean, not the rioting. 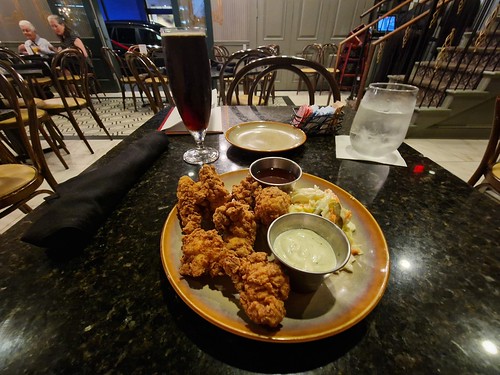 As a starter, I opted for the fried alligator and although I seem to recall trying it at some random point in my trips to the United States I’ve managed to forget all about it. That meant that this was a fresh new experience and this dish surprised and delighted me. The portion size was generous and indeed more than the photo suggests, with the batter being light and melting in the mouth whilst also retaining an initial bite. The alligator was tender and I’m going to have to roll out the trite explanation of the taste insomuch as it was like fishy chicken. There was a spicy pepper jelly and a lime mayo to dip the alligator in and these were both smooth and tasty in their own right, although I did try the spicy bottled sauce which they brought over. When the staff weren’t looking I used my finger to finish up both of them. I never claimed to be classy. I had anticipated the alligator being rather more chewy, so this was all a pleasant dining experience. 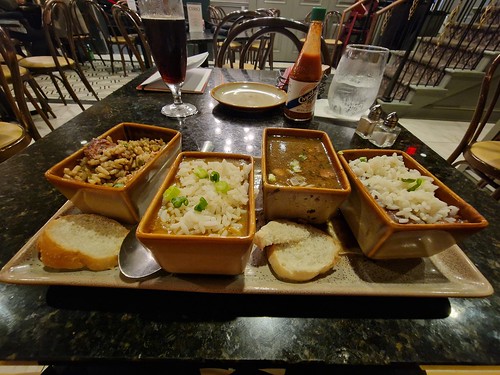 This is the restaurant’s ‘Taste of New Orleans’ selection and you can order any three of the dishes, or indeed all four which I did. I’m never very good at choosing in situations such as this, as it would mean missing out. There’s some bread provided, although ideally there might have been a little more, with generous portions of each of the four dishes. On the left is the Creole Jambalaya and this felt authentic with the Cajun smoked andouille sausage, chicken in a rich sauce and this was also perhaps my favourite of the four. Next is the Crawfish Étouffée which was like a broth with rice served on top and then there’s the duck andouille & black-eyed pea gumbo, which had tender meat and a hearty feel to the sauce. The final dish on the right is the red beans and rice, a much thicker arrangement than I had expected, but there were some spicy flavours to it. There were no disappointments here.

Not the cheapest of meals, but the quality was high and it was as much food as I would have wanted, with the advantage that I had been able to try numerous local cuisines within two courses. I’ve sampled this cuisine before during previous New Orleans trips, but the highlight of this evening was the starter of the fried alligator. Indeed, I would make this at home, but I’m not convinced that the local Aldi sells alligator. The beer was the Blackened Voodoo from the local Faubourg Brewing Co, which was a creditable dark lager, or effectively a German dunkel. It was pleasant and smooth rather than offering any voodoo hidden secrets and I’ve discovered that dunkels go well with alligator. I’m not sure when I’ll be able to try that food and beer pairing again, but never say never.

The service was timely, the server was personable and engaging, with the dining environment being clean and comfortable. There was frequent yelling and other random noises taking place outside, but inside felt a little bastion of calm. I don’t deny that there are more authentic restaurants in New Orleans, but this met the requirements that I had been looking for and it also handily meant that I had used the bulk of my cash up. 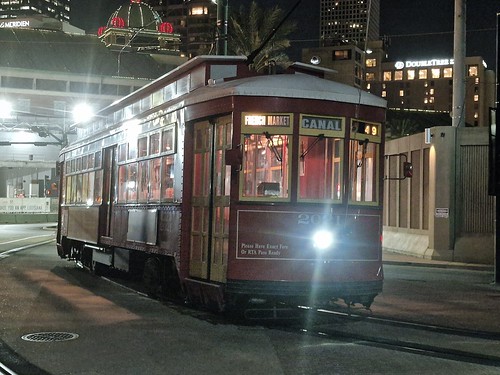 With the meal done, I had a little walk around New Orleans and along the river, but there are limited photos as I hardly dared take my phone out of my pocket. But here’s one of the city’s famous streetcars.