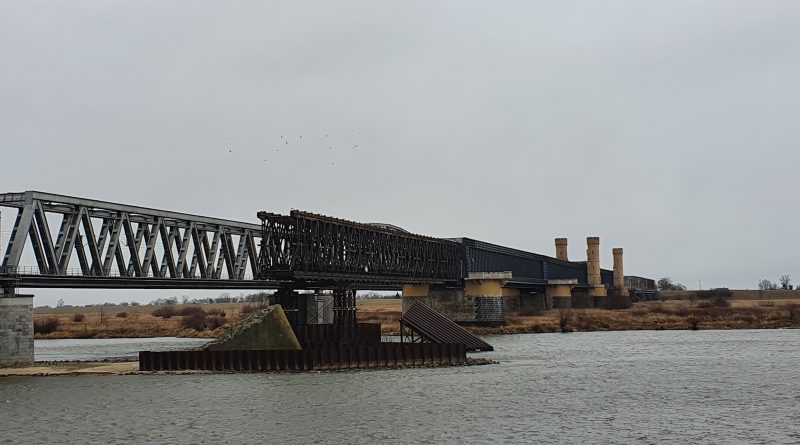 Right, let’s start with a video.

I think that this is quite exciting, a bridge of this length in a state of disrepair obviously had quite a story behind it. I didn’t know much about this bridge until I was in the train going over it last week, and I thought that I’d spend one night in Tczew on my way back to go and visit it. I carefully booked by seat on the train so that I could sit by the window and make this video, with that fortunately all going to plan. There are two bridges here, behind is the rail bridge which is fully operational, and in the front is the broken bridge. Going back in this bridge’s story, it was first constructed between 1851 and 1857 and was designed by Carl Lentze. The bridge was 873 metres long, a phenomenal distance that made it the longest bridge in the world at the time (or certainly the longest in Europe, the claims vary). It was all a bit more decorative once, there were ten turrets on the pillars and two at each gate, but only four of these turrets remain today and they’re visible in my video. They were a bit dithery with finishing these, the bridge had been open for a year before the turrets were completed in 1858. The 150th anniversary stone placed here in 2007. The bridge was initially both a road and rail bridge, but it soon became apparent that a separate rail bridge was needed and this was completed between 1888 and 1891. What is now the broken bridge was then only used by vehicles and pedestrians. The broken bridge (I’m not sure that’s its technical name) was lengthened in 1912 with three additional spans, meaning that it’s now 1030 metres long. Well, it isn’t, as there’s a hole in it, but it would be if there wasn’t a bit missing. It was the Polish military who blew the bridge up on 1 September 1939, right at the beginning of the German invasion of Poland, and they destroyed the sixth span across. German troops were held up on the railway line as they wanted to secure the bridge to enable their troop movements, but it was successfully destroyed by the Poles. It’s fair to say that the Germans were considerably annoyed about this. The railway bridge was destroyed in 1945, leaving no vehicular structure connecting the two sides of the river, although a pedestrian crossing was rigged up. The bridges were swiftly repaired after the end of the Second World War and normality resumed, a separate road and rail bridge. However, in 2000, the road bridge was closed due to it being damaged and unable to cope with the volume of traffic. This wasn’t meant to be a permanent closure and rebuilding work was planned to fix things again.

There are conflicting stories about this on-line, but it seems that work was planned to rebuild the road, but it has become mired in architectural disputes and delays. I don’t quite understand why the road bridge has been left like this, at first I thought it was just unfixed war damage, but the whole issue is much more recent. It seems that the architectural repairs made after the Second World War are seen as important, as very few survive in this form, so the initial plan to just demolish them to rebuild the bridge had to be scrapped. This is the old approach road to the bridge from Tczew, with a diversion required now for cars. And that’s the road to nowhere. Well, straight into the river. And some views of the bridge from the river path, and it’s an impressive sight. There are a few interpretation boards which give some information about the bridge’s history and I think it’s still one of the most intriguing things that I’ve seen in Poland. I accept it’s not the medieval castle of Malbork, but the bridge does tell its own story. 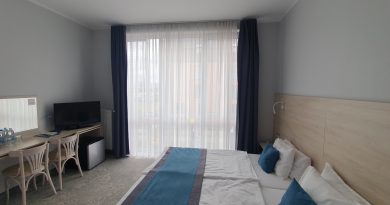 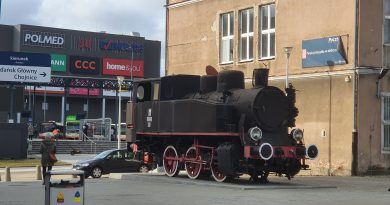 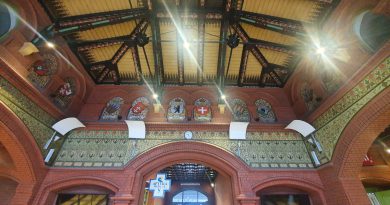