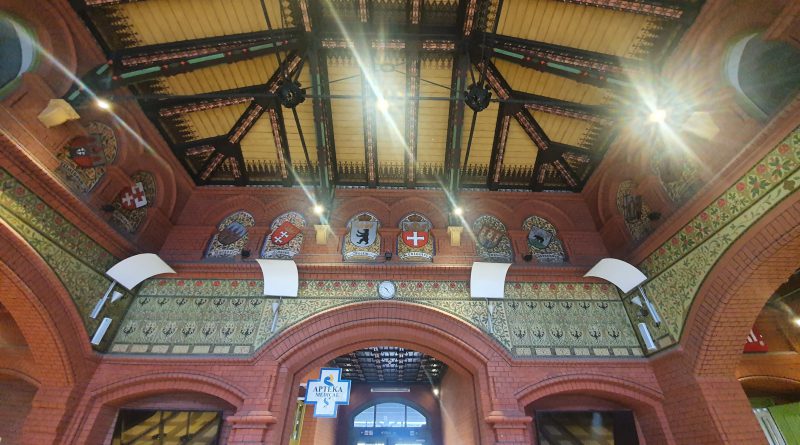 Moving a bit closer to Gdansk again today by going to Tczew, this is the railway station in Malbork which dates from 1891, with a previous building serving the railway from 1852. This was a Prussian railway station until the end of the Second World War and the decoration is certainly quite Germanic. This was the railway station that the Poles managed to stop the Red Army from setting on fire in 1945 and they did well to protect it given its heritage. The grand entrance foyer, with a shop to the left, a waiting room straight ahead and a ticket machine to the right. It really is a beautiful building and money was deliberately spent on it so that it could be the pride of Malbork. It was also a border railway station between the two wars, so the Polish and German trains used this as a changing point. The inside of the large waiting room, with several rows of wooden seats and a television for some entertainment. It was rather cold today, but this waiting room had been heated to ensure passengers didn’t have to endure the Arctic outside conditions. The entrance foyer again, from the other side to the previous photo. The ticket desk is visible in the background and there is a change visible just above it, they changed the Prussian emblem to the Polish eagle after the war. There’s the train I was getting, the 11:15 to Tczew. I hadn’t realised that this is also the train that comes from Krakow and Warsaw, before going to Gdansk and Gydnia. The very wide platform at Malbork, the reasons for which I haven’t worked out. I’m not really sure those narrow chimney things at the railway station are entirely ideal, although most are now propped up with metal supports. This was another short journey, so safely into Tczew within twenty minutes or so. The train, which is on the left, was quite busy and there were numerous school parties on board. I had carefully reserved a window seat this time so that I could video Tczew Bridge when going over it, but more about that in another post. Unlike many stations, such as Malbork, there’s an overhead corridor between platforms at Tczew rather than an underground one. Tczew railway station, not as glamorous as the Malbork buildings and its interiors, but it was functional and organised. As it was on the same line then as well, this railway station first opened in 1852, just as in Malbork. Tczew is a railway junction town which means that the station is relatively important, being the 32nd busiest in the country, which is proportionally much more than the town’s population. The fare was just under £2, so again, another comfortable and efficient journey with PKP Intercity.