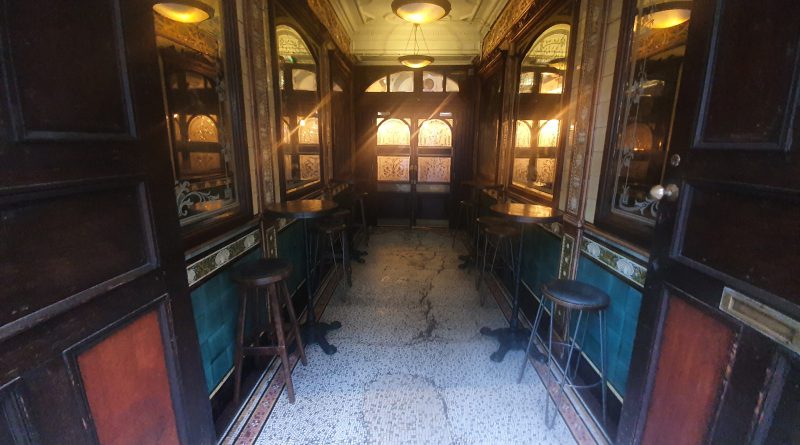 This is some frontage for a pub and it’s the Punch Tavern located on Fleet Street, operated by Urban Pubs and Bars. I’m trying to visit some of the pubs in London city centre that I haven’t been to before, traditionally because they’re too busy. Once a gin palace, and it still has plenty of gins to choose from, it took its current name not from the dreadful Pubco, but from when Punch Magazine staff used to drink here. Every newspaper and major magazine on Fleet Street had its own pub their staff used and they must have drunk a lot at Punch as they had only been publishing for a couple of years when the pub named themselves after them.

CAMRA have added it to their list of historic pub interiors, noting:

“Rebuilt in two phases by Saville and Martin, first the main part of the pub and the Fleet Street frontage in 1894-5 and then the Bride Lane frontage with a Luncheon Bar behind in 1896-7.” A nicely decorated corridor into the pub, necessitated by the shopfronts on either side of this narrow entrance. It wasn’t packed with the customers in the pub, although a group on some sort of tour did pop in later on. The Hophead from Dark Star Brewing, which is a perfectly acceptable beer and it was well kept here, and at the appropriate temperature. It was also the only real ale available, so it was fortunate that they had a reasonable one and not Greene King IPA or similar. When things return to some form of normality a pub like this is going to need more choice than this though, it’s not ideal at the moment. This pub has a much stronger selection of gins, but there are some bottled beers (clicking on the image makes it bigger).

The service in the pub was friendly and engaging, so it felt like a welcoming and comfortable place to visit. It’s also a very large venue, there’s a room at the back and additional space for private groups. The reviews are generally positive on-line and the manager answers them politely and professionally, which is usually a good sign. Anyway, everything felt well managed enough, but the beer options aren’t sufficient to want to tempt me back, even though I liked the environment.