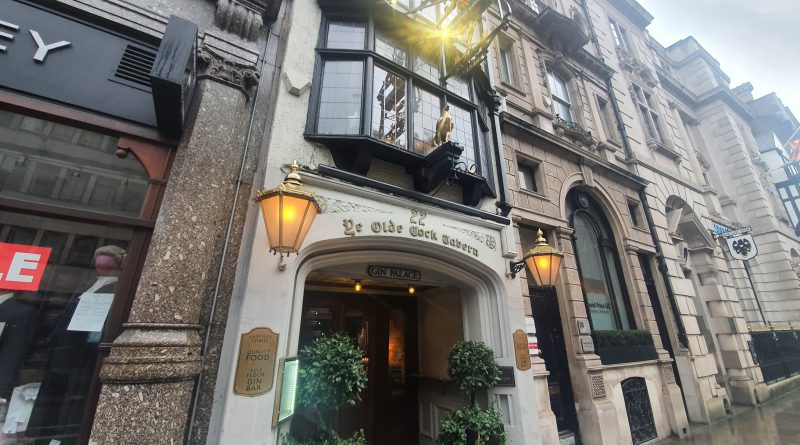 I’ve meant to visit this historic pub on Fleet Street on numerous occasions in the past, but it’s operated by Greene King and that’s always put me off. However, it’s important to support the hospitality industry and so I thought I’d have a little visit since I was walking by. Indeed inspirational, but a slightly odd quote for a family pub, but there we go. Although to be fair, they can hardly advertise their beers given the choice they have inside. Slightly hard to read from this angle (I was avoiding my reflection being in the photo) but it reads:

“The Cock was opened in 1888 with the original fittings from the original tavern on the site of the branch of the Bank of England opposite. The records of the tavern go back to the early seventeenth century. Pepys says “April 23 1668, to the Cock Alehouse and drink and eat a lobster, and sand and…. and then Knipp and I to the Temple again, and took boat, it being darkish. And to Foxhall, alas there are now no Vauxhall Gardens where we can take our Knipp but there is still the Cock.”

The pub was visited by men like Pepys, Samuel Johnson and Charles Dickens, but they visited the pub that had stood since 1546 on the other side of the road. And the historic fittings brought across in the late nineteenth century were mostly destroyed by a fire in 1990. There’s still a depth of heritage here, but it’s a bit tenuous in places. Another history of the pub.

As for the pub itself, this is a mess. The toilets had no hand-dryer, just a sign saying it was broken, but there was no thought to an alternative provision of hand towels or the like. There was no acknowledgement at the bar which didn’t concern me, but is unusual at the moment given how quiet pubs are. However, it was seeing the ‘exciting’ beer selection of Greene King IPA and bloody Rocking Rudolph which they were trying to discount at £2.50 per pint (I added the bloody BTW, that isn’t the beer name) that made me give up. These are not interesting beers (to me at least, and indeed to few people judging by their Untappd scores) and although there are some generic cask options, I lost heart at this effort from Greene King. There are so many good beers in the world, why do Greene King keep insisting on shying away from quality?

Anyway, if Greene King don’t care about their pub, then nor do I, so I went to find another venue for a quick drink. I will say that there was a wide selection of gins, which would have once been one of their staple products so there’s some continuation of history there. Greene King make little effort to explain the history of the pub on their web-site and it’s a shame that another operator isn’t in control here. Mainstream as Nicholson’s might be, they’d put a touch of elegance into proceedings, and even JD Wetherspoon would do a far better job although the venue is a little too small for them. Maybe one day a pub like this will be independent and have owners that it deserves given its heritage, even if that heritage is a bit loosely defined.

Moan over for the day.