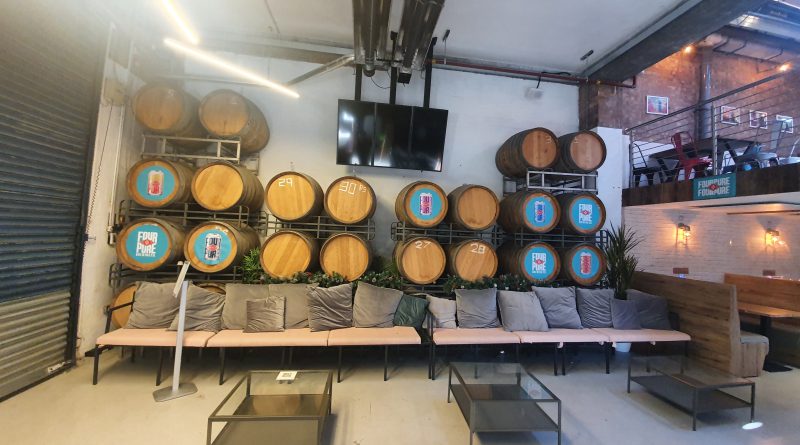 I’m slowly working my way through the Bermondsey Beer Mile bars, and anything close to them, which is difficult navigating the often wrong opening hours of venues. Fourpure was open, but it’s bloody hard work to find it, for anyone not sure, get close and then walk by Screwfix and then under the above bridge. In an unusually sociable moment, I noticed three people trying to find Fourpure and so I tagged along behind them whilst we agreed it was hard to find. I’m glad I did as it’s difficult to find the door and then when we got in, it all seemed to be deserted. I found the lack of signage a bit odd, but perhaps there’s something of the thrill of the chase that the breweries want. Enter here, which is easier to see when there are people sitting at the tables, which there weren’t when we approached it. Inside, whilst the other three people went to look for someone and I just hung about taking photos. The venue’s offerings are on Untappd at https://untappd.com/v/fourpure-brewing-co/1201218. There were a few guests, mostly from Magic Rock who are their sister company. There was only one darker option, which was a Fourpure beer that I’ve already had, which was slightly disappointing, but not surprising.

I’m not a huge fan of Fourpure’s beers, I always find them a bit generic and unexciting, but I ordered two beers (just as thirds) which were the only core beers in the range that I hadn’t previously tried. They tasted OK, but I wouldn’t order them again as they weren’t of any great note. I’m also not keen on calling this craft beer, as they’re owned by Lion, an enormous brewer who have poured money into new equipment here. And slowly but surely, they’ve managed to deliver something as sterile and mundane as the other brewers.

As for the taproom, it was clean and modern, with charging points dotted around the place which was handy. It was a bit cold inside, although fine for me, but there were heaters available at the press of a button for those who wanted them. The team member wasn’t rushed off her feet it’s fair to say, but she was friendly and engaging. All perfectly jolly, but it felt formulaic and like something a multi-national would build, which isn’t really what I’m looking for.