I’ve never bothered trying to get in this Nicholson’s pub before, located near to Blackfriars Station, as it always looks heaving with people (the pub, not the station, although that’s just as bad). It was a little busy outside, but I ventured in and discovered that it was very quiet inside. As I mentioned when visiting the Old Bank of England pub last week, this is an ideal time to visit pubs that are usually too busy to get in, although I accept it’s hardly the ideal situation for the hospitality trade in London.

Not that it much matters, but there’s a difference in opinion in whether this pub is the “Black Friar” or the “Blackfriar”. CAMRA and Wikipedia go with the former, but since the pub goes with the latter, I’m going with that.

The pub has been here since 1875 and the flatiron style building was designed by the architect H. Fuller-Clark and artist Henry Poole, with John Betjeman being involved in a campaign to prevent its demolition in the 1960s. The pub is in a slightly strange position and I can imagine that a much bigger building would have made more money, but I’m glad that this piece of Victorian history has survived. The pub, as well as the area and the railway station, takes its name from the monastery that was here until the Dissolution of the Monasteries in the sixteenth century. I was welcomed promptly and informally, so it all seemed a comfortable environment. I had no end of problems with the Nicholson’s app and with the menus not loading, but I persisted and got my drink ordered. There wasn’t a great deal of choice, three relatively standard ales, but at least there was that so I had a little bit of a selection. Some of the decoration in the pub, which I suspect has more character and atmosphere when there are more customers in it. There were quite a few staff, so I wondered whether perhaps it wasn’t as quiet as they’d anticipated. It’s difficult to walk around during these Covid times, otherwise I would have liked to have explored the interior a little more. I see that the listed building record notes:

“Small, windowless extra rear vaulted room, known as the Grotto, excavated from a railway vault, designed by Clark in 1913 but not executed until 1917-21 owing to the war.”

For anyone who is interested, CAMRA have a page on the pub’s heritage. I didn’t want to repeat the same drink I’d had earlier in the day in another Nicholson’s pub, so I just went with a Doom Bar. I know a beer that this is modelled on, but I won’t comment on that here…… The beer was fine, at the appropriate temperature and all that (someone will be glad to hear that I know). The pricing in the pub was a little expensive, although this is central London, but the app gave me 25p off as a little reward, so that was handy.

The reviews for the pub are pretty favourable, there don’t seem to be any real issues here and I felt welcome. There wasn’t a huge amount of engagement from the staff members, but since orders needed to be placed via the app, that does restrict things a little. The pub has made its way into the Good Beer Guide, I suspect more from its heritage and character than necessarily the slightly limited beer range (although CAMRA suggest that there’s normally much more choice, and I understand that these are difficult times). Either way, I’d come back here again, and it’ll be positive to see it much more packed once again as that might just mean things in London are nearly back to normal. 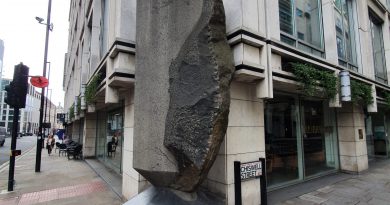