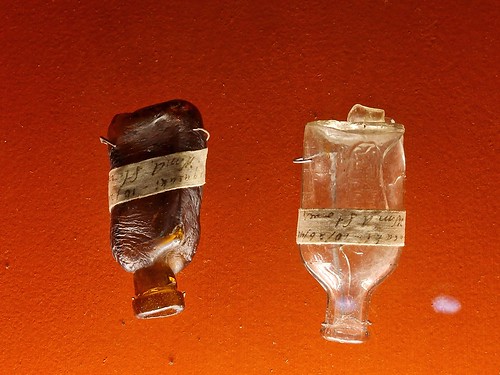 These two glass bottles are on display at the National WWII Museum in New Orleans and the museum exhibit notes:

“Eighteen-year old William A Stover, a pharmacist mate aboard LST 585, went ashore at Nagasaki on October 26 1945. Among the ruins, Stover collected these two bottles. In a letter home to his father, Stover recounted his experience: “Yesterday I went ashore in Nagasaki. A bunch of us went up to the ruins to hunt for souvenirs. I’m sending a few pieces home that I picked up. There were some skeletons around, but when you touched them they just crumbled to ashes”.

Stover’s visit was over two months from when Nagasaki had suffered from a nuclear bomb dropped by the United States on 9 August 1945. The above photo are from the US National Archives showing the city before and after the bombing and it’s hard to think what the 18-year old Stover would have thought about what he saw.

Back to the glasses, the writing on them is from before the attack and despite the nuclear bomb, the bottles were twisted out of shape but didn’t break or lose their paper labels. The museum gives more information about Stover, although that’s more because they want to charge for usage of imagery ($20 to have the image saved only locally on a private computer, much more to use anywhere else), but that’s better than their usual efforts. They add:

“William Ammon Stover was born on 15 March 1926 in Williamsport, Pennsylvania. He joined the United States Navy Reserves in April 1943 and graduated from the Navy Hospital Corps School Norfolk Navy Hospital in Portsmouth, Virginia in September 1943. Stover served aboard LST 585 in the PTO as a Pharmacist’s Mate, Second Class. Stover left LST 585 on 2 November 1945 and was transferred to a fleet pool in Okinawa and then served on USS LSM 273. He was discharged on 2 March 1946 at the Sampson Naval Separation Center on Lake Seneca, New York. During his service he took part in the Lingayen Campaign, Tarakan Island, Dutch Borneo as well as the landings on Bataan Island and Corregidor Island. In 1948 he married Carolyn Margaret Russell. After the Navy, Stover attended Bucknell University and worked as a technical illustrator, writer, and editor. He spent ten years with Bell Aircraft in Buffalo, three years with GE in Syracuse and Oklahoma City, and six years with Texas Instruments in Dallas, Texas. He later owned, operated, and retired from a Kwik-Kopy printing company.”

I mention all this as it must have been something of a culture shock to come back from such an experience in Japan to try and settle back into what might be called a normal life.