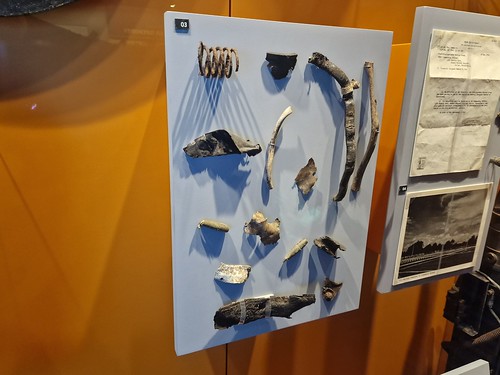 This heap of metal are parts of the wreckage of the P-47 Thunderbolt aircraft that was being flown by 1st Lieutenant Augustus Hamilton on 14 July 1944. It was intended to be his final mission before returning to the United States to see his wife and new born-son, but it was a flight that he didn’t survive after being shot down by German enemy aircraft. It wasn’t known exactly what happened to his aircraft until 1993 when the crash site was found in France and these items recovered.

Augustus died at the age of just 22, never meeting his son also named Augustus (1944-1985). What I find especially poignant is that his sister Margaret Hamilton McPhail lived until 2013. She lived for just shy of 70 years without her brother, but at least she got to find out exactly had happened to him during her lifetime. There are some more photos at the Association of Forced Landings web-site. Augustus was born on 4 January 1922 and would have celebrated his 100th birthday just a few days ago. He’s buried at Normandy American Cemetery and Memorial which is located by Omaha Beach.