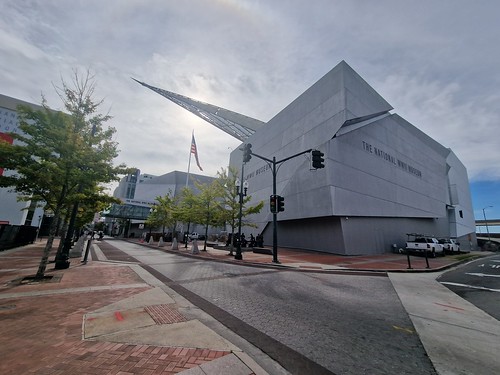 This museum was the reason that I had returned to New Orleans as I didn’t have time to do it justice on my previous visits. I was also particularly interested in how the story of World War II was told from the US perspective, as I’m used to museums in Poland, the UK, Germany and so on having their own focus and narrative of the events. Looking at the reviews, there are a few people complaining that the museum is telling the story far too much from the US side of things, but I’m not sure that I would want it to be anything but. I don’t much want to see an identical museum in every country in the world explaining the Second World War in exactly the same way, I’d expect the German, Russian and Polish perspectives to be different. 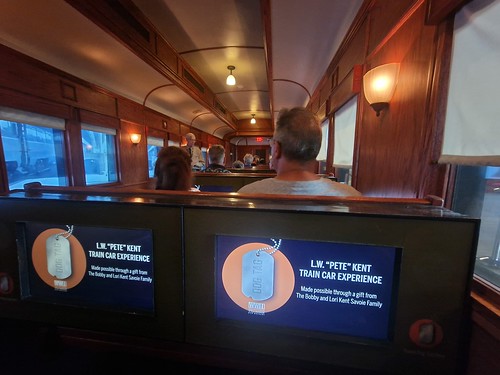 The museum journey starts with a short recorded message and encouraging visitors to use the dog tag card they’ve been given to follow through an individual and their Second World War story. 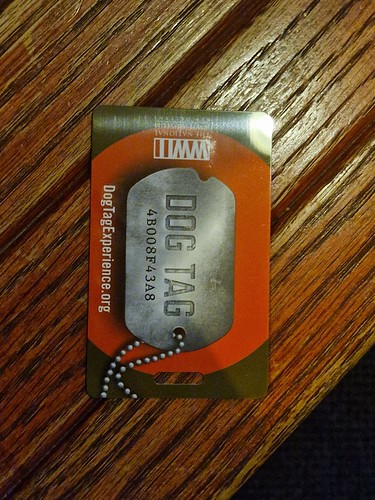 I thought this was all a bit odd, there wasn’t really any following through of the character and it felt a little one-dimensional with a short story of what they did during the war. But, for anyone interested they can type the dog tag card number in at http://dogtagexperience.org/. The museum claim this is a very popular feature that they’re proud of, but I didn’t see anyone using them to tap onto the displays. 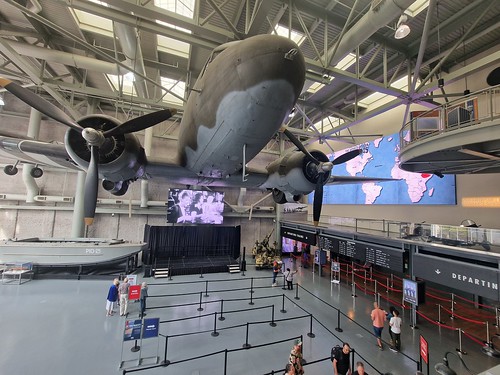 Looking down into the main hall of the museum where visitors can buy tickets, although I purchased mine on-line in advance as they recommended this as the most efficient way of visiting and it allowed me to get a timed ticket. They had plenty of free lockers which was handy as I didn’t want to traipse my bag around and I’m not sure that I would have been allowed to either. A docent was full of enthusiasm when greeting me and there was a feeling that this was an inviting place to visit that I liked, some very good first impressions. 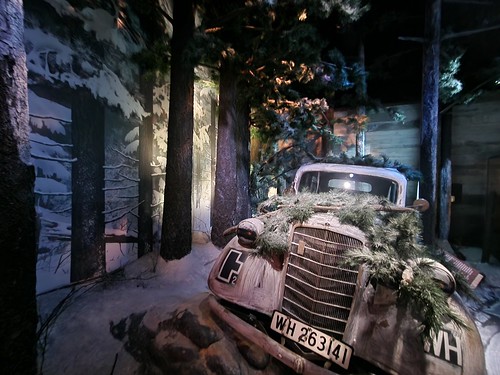 Originally known as the D-Day Museum when it opened in 2000, there have been several expansions to the site and it’s now a number of separate buildings with some slightly confusing navigation between them. Unfortunately, the piecemeal expansion of the museum as new funding streams have become available has created a lack of flow between the different areas as well as some pinch points which are far from ideal. 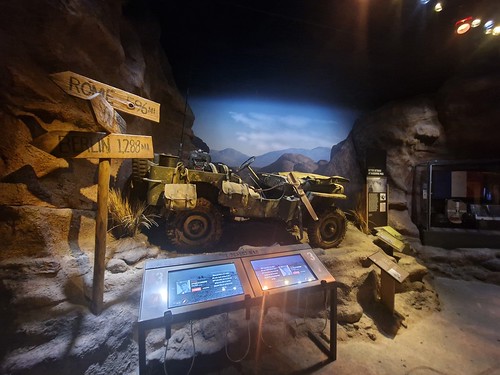 Some areas were a little crowded with people, but for those I just came back a little later and the same sections were often deserted. I did feel that given the efforts the museum claimed it was making on timed tickets and not allowing crowds that it did feel rather over busy at times, but I had the time to revisit displays when it wasn’t as packed. There are no shortage of visual elements though in the displays and they’ve balanced technology well between things to read, things to look at, things to watch and things to listen to. 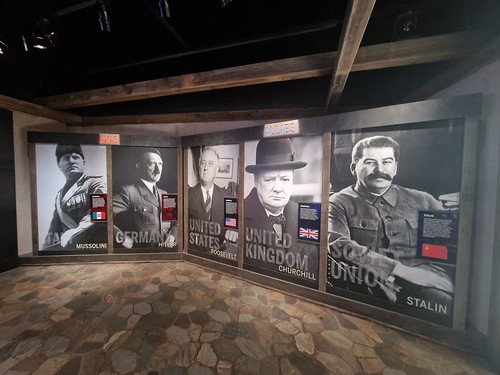 As for the content of the museum, it was thought through and in terms of navigation I only went the wrong way once which is a result for me. There were plenty of video and audio sections to find out more about a topic and I learned a substantial amount about the D-Day landings at this museum due to the way the information was presented. There are strong focuses on these landings, as well as the Road to Berlin, the Pacific war starting with Pearl Harbour and ending with the nuclear attacks on Japan. The museum deliberately doesn’t tackle matters such as the Holocaust in any depth, although they by no means shy away from it, but its focus is on being a military museum. 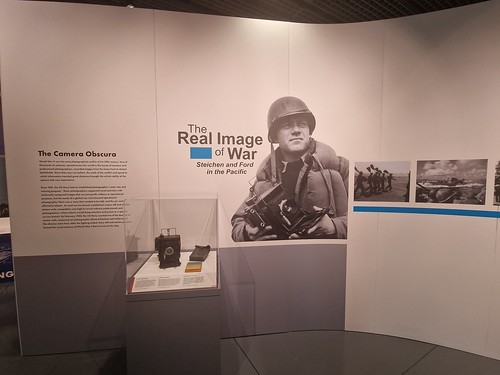 In addition to the permanent collections there’s also a revolving temporary collections area, at the moment it’s about military photography during the war. 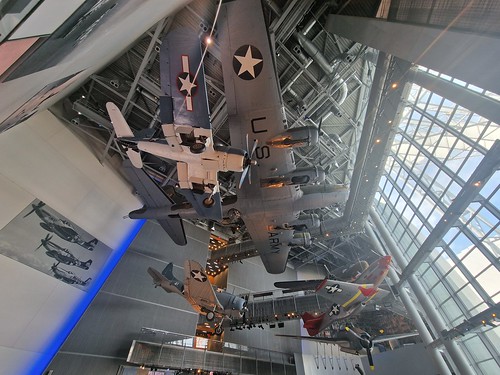 There’s a main hall of various aircraft which makes for quite a first impression given its size. 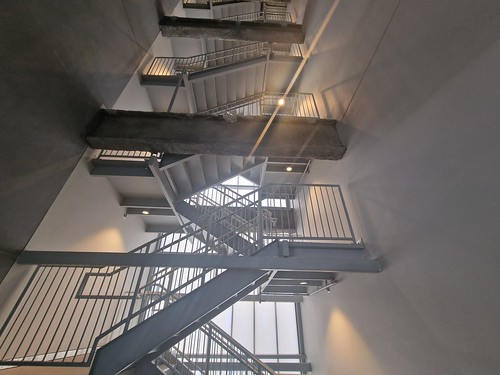 There was a lift to the top, but I’m brave and so walked up these steps. 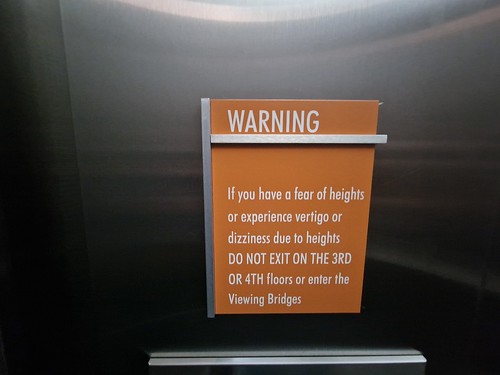 I don’t like heights so I was being very brave as far as I was concerned. 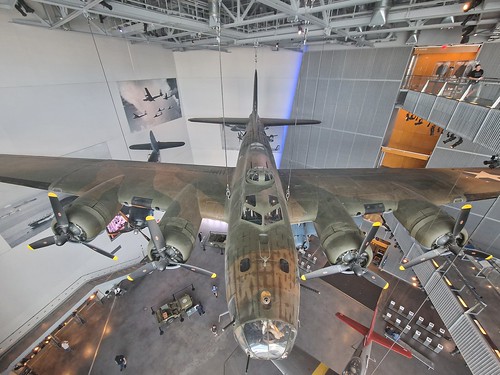 It was worth it for the views. 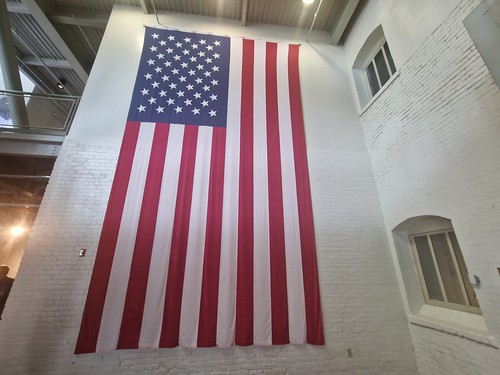 And for everyone who fought to protect the freedom of the United States. 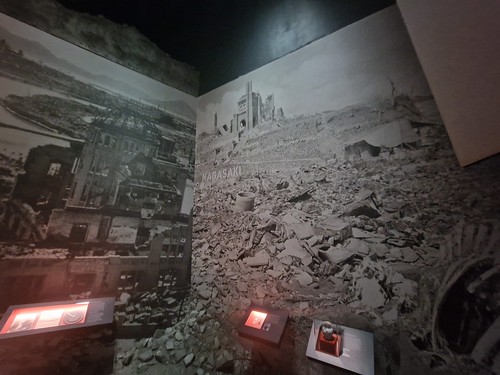 I’ll write more about a few individual items in the museum that resonated with me in the next few posts, but to me this was the most powerful of all the display rooms. It was large images of Hiroshima and Nagasaki which effectively brought the Second World War to an end, with a number of exhibits in the room that were damaged during the nuclear attack. Seeing exhibits of that kind does bring the fearsome reality of these horrors to life and the relative minimalism to this room accentuated that.

Entrance to the museum was expensive at over £30, but I was there for the bulk of the day and it would be possible to stay for longer if listening to all of the audio and watching all of the videos. Museum fatigue creeps in with me after around five hours though, so I felt that I had seen everything I needed to. It was a magnum opus of military museums and I was very pleased that I went.

As something of an addendum, I feel the need to mention that the museum has a poor on-line catalogue of their exhibits which is far behind most other national museums. There’s nearly nothing mentioned on-line, so many exhibits feel like they’ve lost their provenance with limited information on their display labels at the museum and no way for the public to access the institution’s collection database. I would hope that some work can be done in this area, as if it doesn’t involve selling the rights to use images, the digital presence of the museum is very weak outside of the specific exhibits they want to feature.