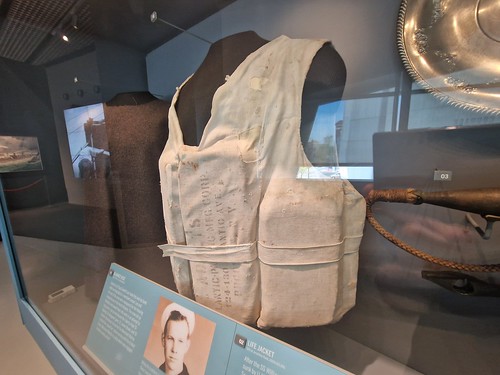 This is one of the exhibits at the National WWII Museum in New Orleans, a life jacket which was worn by Seaman Troy Graves for 20 hours after the SS William J Salman was torpedoed and sunk by a German U-125 submarine on 18 May 1942. The museum doesn’t go into the back story of this incident so it’s easy to walk by and not take in the enormity of what Graves must have gone through. There were 28 crew on board the William J Salman, a merchant ship which was unarmed and unescorted.

The attack happened around 120 miles from Cuba and the submarine’s torpedo meant that the SS William J Salman had no chance, sinking within just a couple of minutes of the attack. Of the 28 men on board there were eight officers and twenty seaman, with no time to launch the lifeboat. Two officers died, including the master Charles Bryant, as well as four other crewmen, the other 22 crew survived. But they had to stay afloat on bits of the boat that hadn’t sunk for 20 hours before the Latvian steam merchant Kegums picked them up and returned them to the United States.

It’s really not very easy for anyone who hasn’t been involved in war to be able to imagine what this sort of event must have been like. The Germans attacked 150 ships in this area between 1942 and 1944, forcing the allies to use convoys despite being nowhere near the main theatre of war at the time. The Americans had only just entered the Second World War at this point and the crew on merchant ships must have been suitably terrified of an attack that could come at any time. Ironically, the SS William J Salman had already been involved in the war in a different way, it was a rescue vessel which picked up the survivors of the M/V Australia which was carrying fuel oil to New York.

Then suddenly an attack does come, for which the crew were no doubt trained but they had little time to think with their vessel sinking in just two minutes. Troy Graves must have known that colleagues on board had died and the hours in the water must have been traumatic. There were at least 22 men to try and keep spirits up and the water was perhaps tolerable in terms of temperature, but I can’t imagine it was particularly idyllic knowing that there was potential for attack from things living in the sea and perhaps from German forces.

And this life jacket is one of the few items that remains from the vessel, which is still stuck at the bottom of the ocean. I can only imagine that Troy Graves treasured it as a memento of a fortunate escape, but a reminder of the horrors that took place and the colleagues that were lost. If it were me, I think I’d keep the life jacket but try and hide it away so that I didn’t have to see it. There’s not much else I can find out about Troy Graves and the only clue is that a Jeraldine Peek gifted this to the museum in 2005. Unfortunately, the museum has a poor on-line database which doesn’t list much of their holdings and they have nothing on this. Even if typing in the item number code into Google it still comes up with nothing, although the search comes up with several other museums who must be using similar software to record their items. But at least they’ve got the life jacket, so the story can still be told in at least some form, but there must be more to tell about what Troy Graves went through.