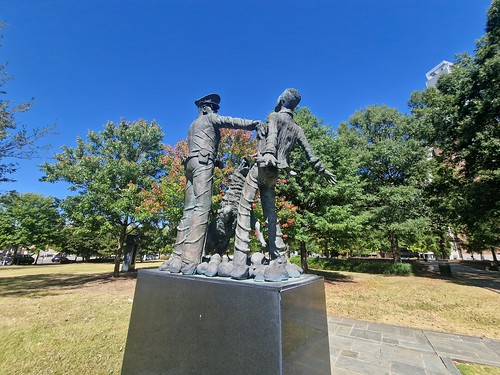 This is a powerful sculpture located at Kelly Ingram Park (named after the first US sailor killed during the First World War) and was designed by Ronald McDowell. What is represents though is quite complex and has been featured in many news stories over recent decades. 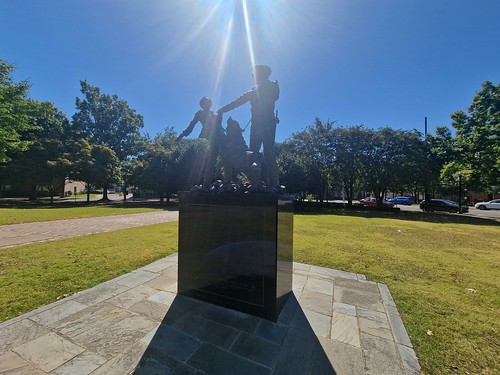 Not readable here, but written on the sculpture is:

“This sculpture is dedicated to the foot soldiers of the Birmingham Civil Rights movement. With gallantry, courage, and great bravery they faced the violence of attack dogs, high powered water hoses and bombings. They were the fodder in the advance against injustice”.

The back story of this sculpture can be read here as this sculpture is based on photos taken at the time which I think are still in copyright so I’d better not put them here.  Bull Connor, the city’s Public Safety Commissioner, ordered the police to use dogs during civil rights protests in Birmingham and the photos taken started to change perceptions in the rest of the United States about what was happening in states such as Alabama.

The story is more complex than this as explained here, where by chance the 15 year old person immortalised in the sculpture, Walter Gadsden, wasn’t really part of the civil rights movement and was just a bystander. But that doesn’t make much difference to the telling of the story as a whole, Connor’s treatment of protesters was appalling and he would merrily authorise the use of water hoses, dogs or threat of arrest to stop the civil rights movement.

Much was made of the photos though at the time, they were covered in newspapers and politicians comments on them. The policeman Dick Middleton and his dog Leo became part of the story, although accounts of this particular officer (and there were many from journalists) is that he was a polite and respectful member of the service, not something that could be said about some of his colleagues who were very much supportive of Connor’s tactics and political thoughts on maintaining segregation. Middleton died in 2015, he had remained in the area and after 30 years in the police service he had become involved in owning the Klingler’s European Bakery in the city.