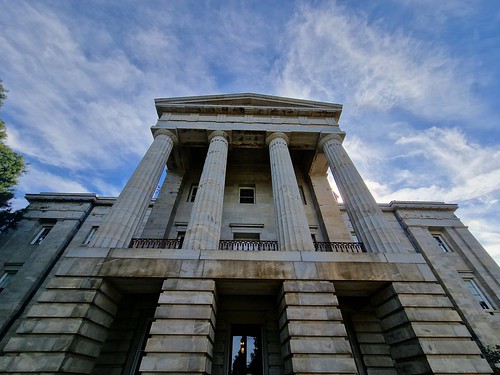 I like to visit State Capitols and this is no exception, although unlike many others it’s no longer in use as originally intended as they constructed a new building in the 1960s. There was the usual security process to get in, but the guard was helpful and welcoming. It was a bit unclear at first where to go as there aren’t any printed guides, but nearly everything was open and visitors could just walk in, so that proved to be easier than I had expected. 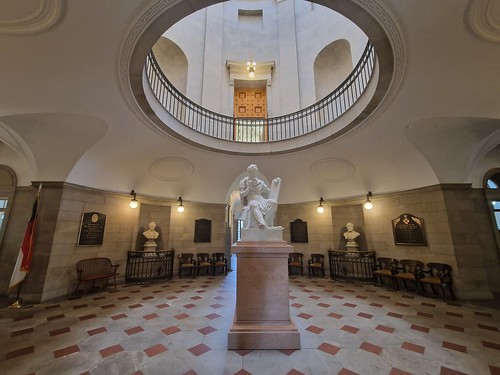 The grand entrance area and the statue of George Washington. I had to take this photo at the end of my visit as I was about to take a photo at the beginning when the tour guide pushed past with her group. I was more amused than anything else at the situation as the group were mostly ignoring her and she seemed a bit oblivious to everything else around her. She also blocked the steps for other visitors later on after deciding she would have her group stand on the stairs to listen to her quite boring monologue. She wasn’t a patch on the lovely guide at the Virginia State Capitol. 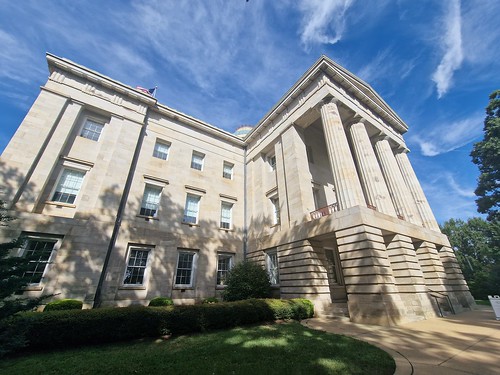 Rolling back a little on the history of the building, the first section was opened in 1794, replacing the previous Capitol at Tryon’s Palace. The denizens of the state were very pleased with their building, extending it between 1820 and 1824. And then it burnt down in 1831, which it was unanimously agreed wasn’t entirely ideal. 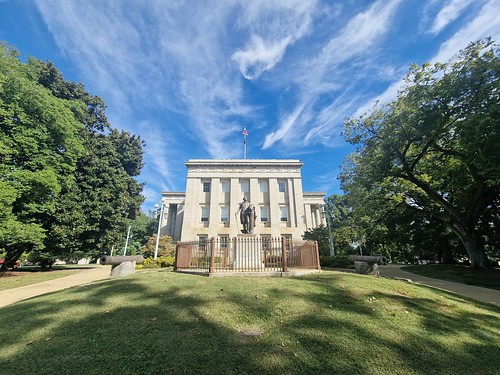 A new building replaced it in 1840 and that’s the one that stands today, although it came at a huge cost of $530,000 which was a ridiculously large sum for the time. 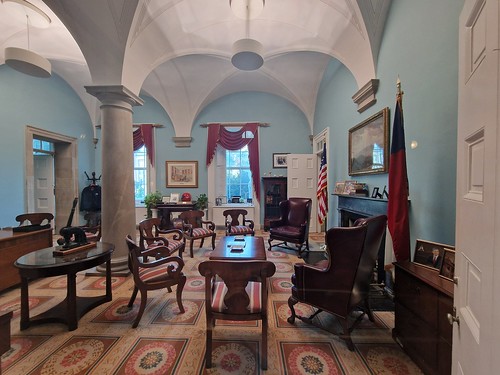 Some of the ground floor rooms in the building are still used for State business and this is one of the Governor’s rooms. 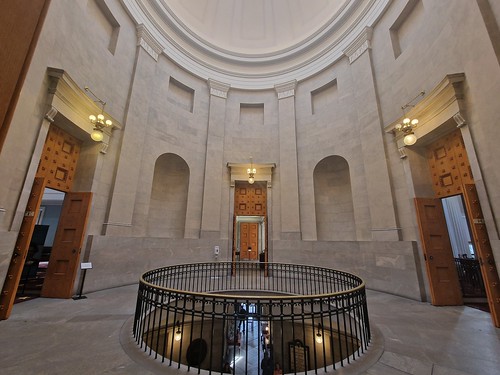 The first floor (or second floor if you’re American) with the two former legislative chambers on either side. 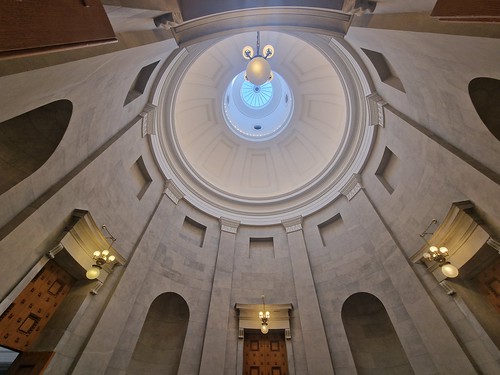 I thought that this was suitably grand. I did debate doing something similar in my flat, but then thought it might be a bit ambitious. 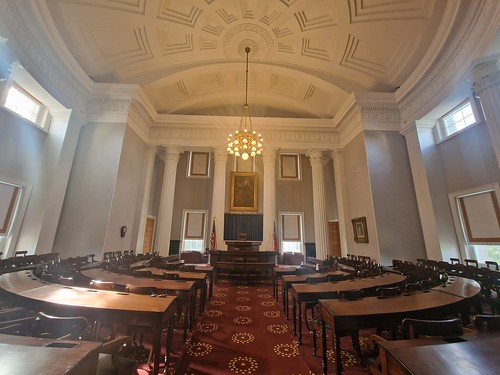 This is the North Carolina House of Representatives, in use between 1840 and 1961, and this was originally known as the House of Commons. There’s some poignant history here, this is the room where in May 1861 delegates unanimously agreed to secede from the union. 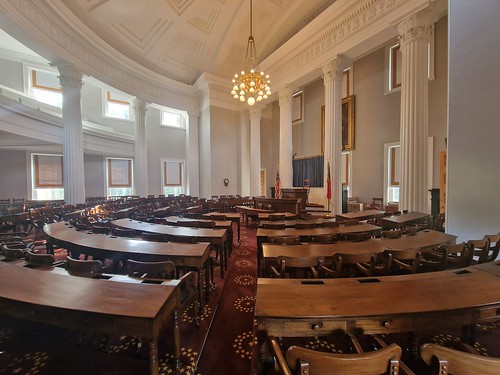 The same room and it’s a shame that they couldn’t have kept sitting here for reasons of heritage, but I imagine they didn’t feel that there was enough space. To be fair, the tour guide managed to block half the building on her own, so it’s hard to picture the scene of hundreds of legislators and their staff. 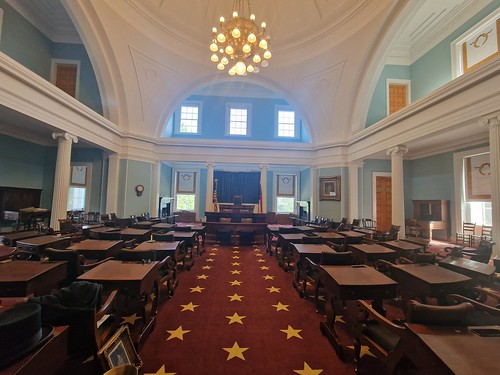 The North Carolina Senate, also in use between 1840 and 1961. There were fifty members who sat in this Chamber, compared to 120 in the House of Representatives. 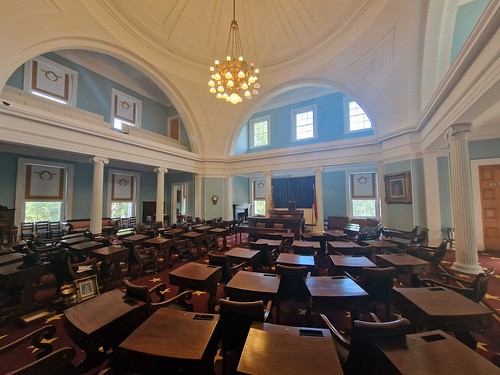 And the same room from a different angle. 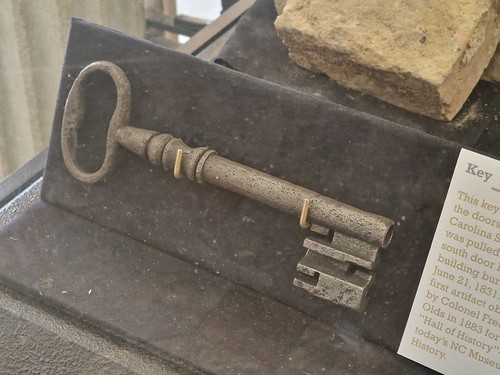 I very much liked this, it’s the key to the 1831 building that burned down. It’s also the first exhibit that was obtained by the North Carolina Museum of History (that I’ve just written several posts about) although clearly they weren’t allowed to keep it. 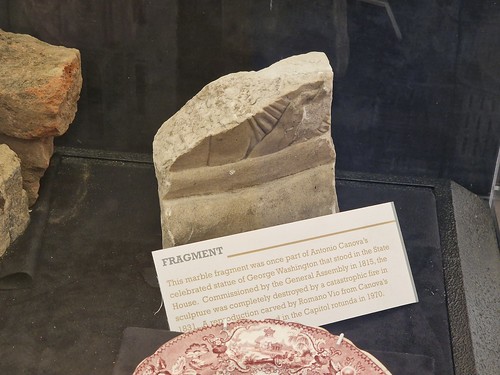 The statue of Washington I mentioned earlier is a replacement because the original, designed by Antonio Canova,was destroyed in the fire. This is one of the bits that they salvaged. Not really enough to patch something together with. 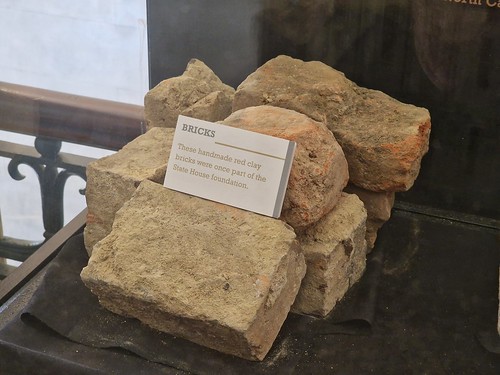 And some bricks, as I like historic bricks, from the foundations of the first State House in the city. 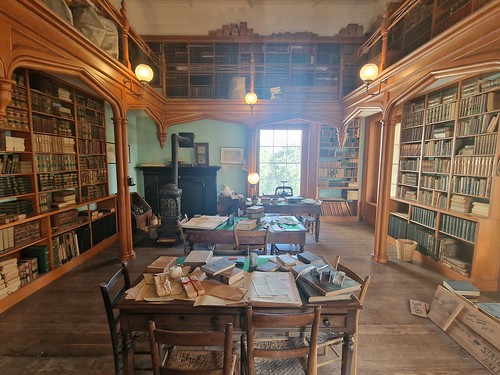 One advantage in the building mostly coming out of use is that they’ve been able to open sections of it up, including the first library. It was used as the State Library between 1840 and 1888, but they had to start again as their other books were destroyed in the 1832 fire with the exception of a huge number that had been taken out by Archibald Murphey and were long overdue. 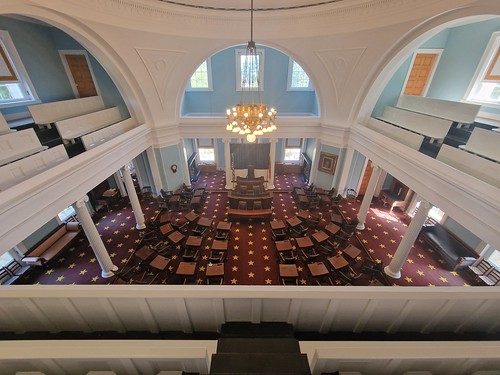 Viewing the Senate Room from above. 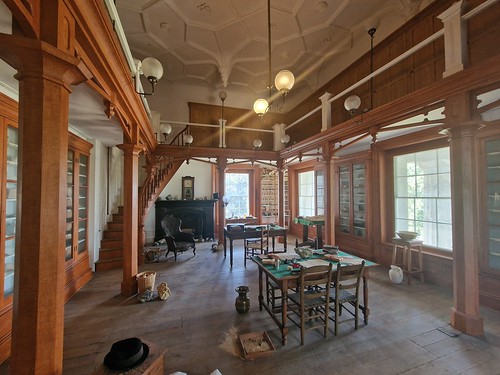 On the other side of the building is what was in 1840 the State Court, but that soon moved and this became a geology room which was used as something of a museum. Fortunately, the building wasn’t too badly damaged when the Confederates handed the Capitol over to the US army, although some items did go missing.

I didn’t have much time to really explore the grounds of the building, nor indeed visit the replacement Capitol, as I had a third museum to visit, a bar and then had my train to catch. But I very much enjoyed looking around this Capitol, it is more of a museum than a working building, but it felt quite authentic for that reason. And no prizes for guessing that my favourite room in the building was the library, I felt that was really quite peaceful and charming.