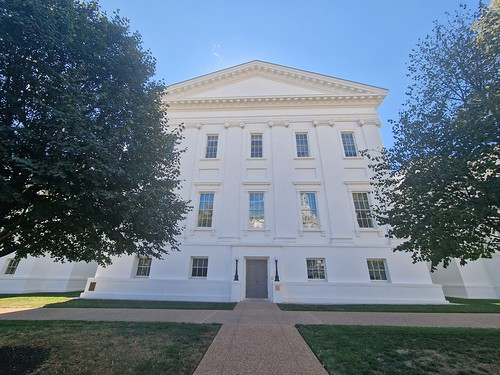 I always try and visit the Capitol building in each state if I can, although I’ve lost track a little which ones that I’ve been to over the years. The Virginia State Capitol is in Richmond, although it has in the past been located in the towns of Jamestown and Williamsburg. This one has the honour of having the oldest elected legislative body in North America, as it contains the Virginia General Assembly, once known as the House of Burgesses. I prefer the word burgess as it is a traditional British word, but that’s the exact reason they changed it in 1776, to mark a break from British rule (or misrule). 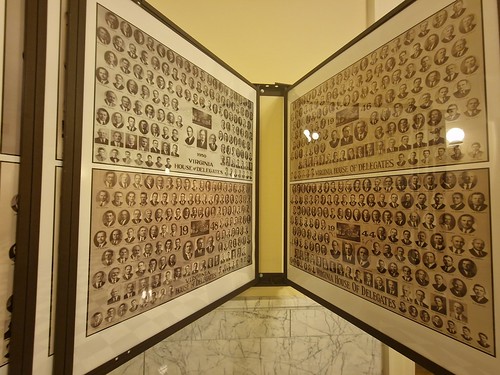 Although there are security checks, anyone can enter the Capitol building free of charge, which I think is a principle that applies to all of the states, notwithstanding the issues caused by the Trump uprising in the US Capitol. There are these display units showing all of the past members of the House of Delegates. 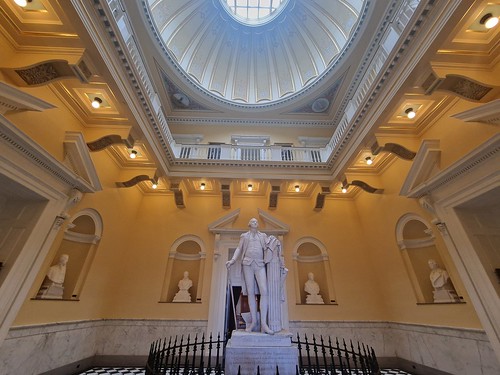 The central lobby of the building. I was just going to have a look around myself, but a lovely lady came over to talk to me and mentioned that she’d be doing a tour soon after. That proceeded to be a private tour that lasted over an hour and she was a marvellous representative of the state of Virginia, knowledgeable, welcoming and keen to engage. That dome looks like it should be visible from miles around, but it is sunken in and was a last minute addition.

The marble statue of George Washington is also important, it was created by Jean-Antoine Houdon in 1785 and it’s the only one that Washington posed for and he also took an oil impression of his face to ensure that it was life-like. It stands at 6 feet 2 inches, just as Washington did, and is thought to be the most authentic representation of the former President. The guide asked me if I had visited the copy of this statue which is at Trafalgar Square in London and I had to confess that I wasn’t entirely sure that I had ever noticed it. I will though look out for it next time I’m in London.

I took this photo a couple of days later when I returned to Richmond, but it shows the extensions on either side of the building. The Roman style architecture (actually a copy of the Maison Carree in Nimes) was an attempt by Thomas Jefferson in 1788 to build something that wasn’t British in design, although the guide explained that there isn’t much stone going on here, this is a brick building with plaster all over it. And, those columns had pine trees in them whilst they worked out how to deal with crafting them to make them look in keeping with the proportions, with those trees still apparently being in there. 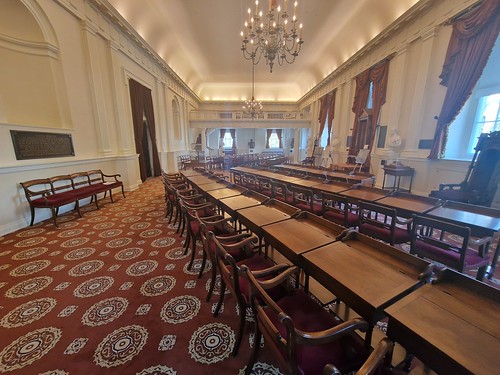 There are plenty of important historic moments that have taken place in here, this was the Chamber of the House of Delegates between 1788 and 1904. It’s where the state agreed numerous constitutional changes and also, perhaps most significantly, it’s where in April 1861 the representatives of Virginia agreed to secede from the Union and they placed Robert E Lee in charge of the troops. Lee is a controversial figure, he supported the right of people to own slaves, although he was personally against the practice on moral grounds. 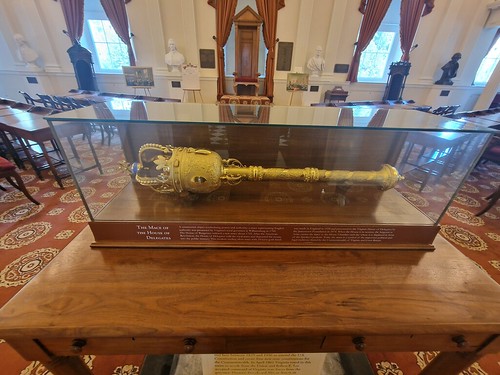 I’m not entirely sure why they have a mace, as it was one of the things that the Americans wanted to get rid of at independence. By 1774, they had flogged off the ceremonial mace that had been given to the Colony of Virginia in 1700 and they had initially intended to replace it with a new specially commissioned one, although they didn’t bother in the end. This new mace was presented to the House in 1974 and they seem to quite like it, apparently now wanting to foster links between the US and the UK. 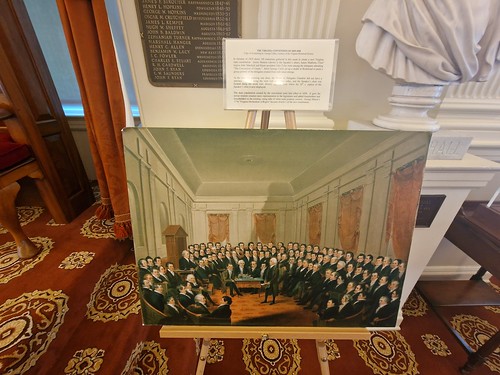 How things used to look in this room. They stopped using this room in 1904 as that was when a new East Wing was added for the House of Delegates and a new West Wing was added for the Senate. The new rooms were opened for use in 1906 and these older rooms were partly repurposed for offices, although have been put back again to how they once looked. There was an extensive redevelopment project between 2004 and 2007 which saw the entrance reconstructed with a new underground lobby, but that’s closed at the moment as they’re modernising once again and also fixing some bits of the building which aren’t in great shape. 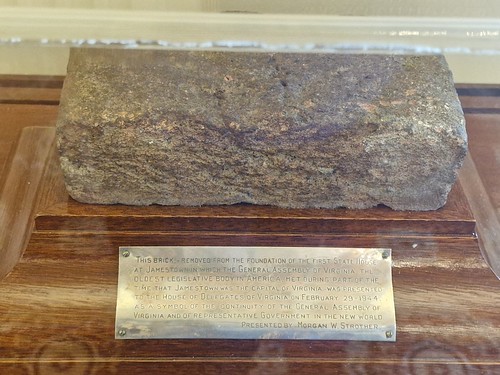 A brick from the first Capitol building in Jamestown, giving some continuity to the General Assembly. 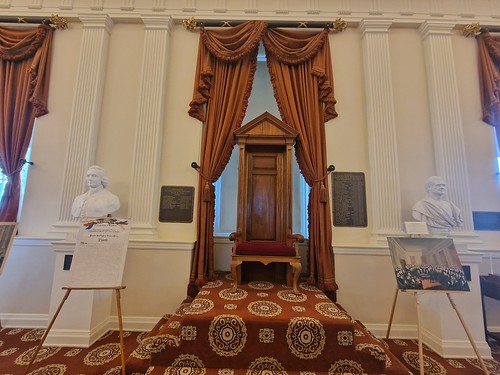 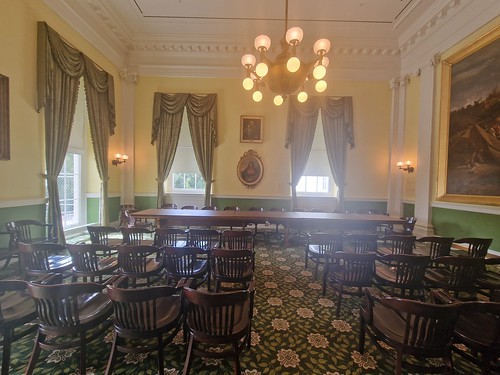 The Old Senate Chamber, although smaller in size than it once was. 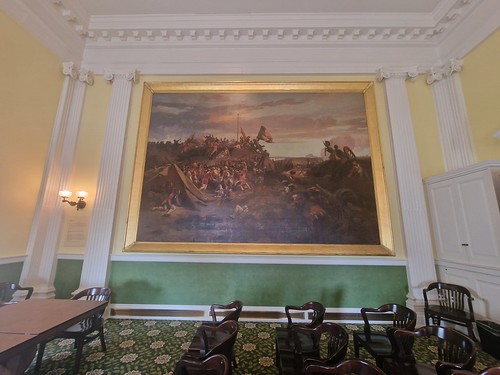 Within the room is the Eugene Louis Lami painting of the storming of a British redoubt at Yorktown by American troops, not entirely ideal for us British visitors…. However, Queen Elizabeth II and Margaret Thatcher have had tours of the building and I think it’s agreed now to let bygones by bygones. 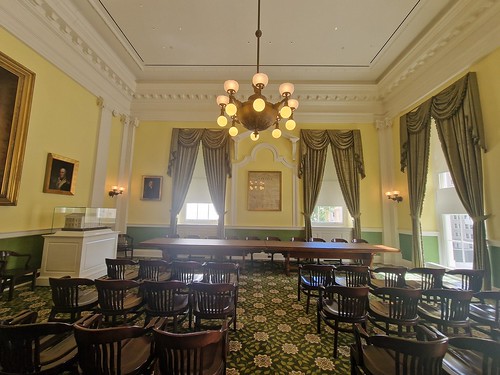 The Jefferson Room, which was once part of the Old Senate Chamber, but it was sliced up in the early twentieth century to make way for new offices. That model on the left is an original one that was used in the planning of the building. 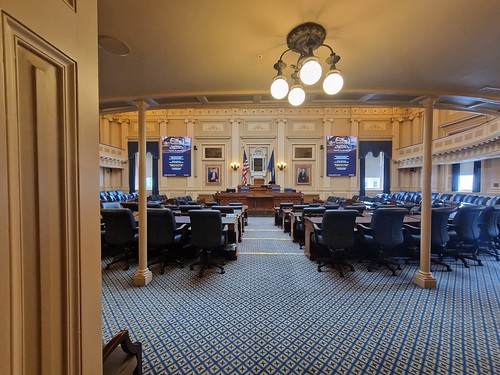 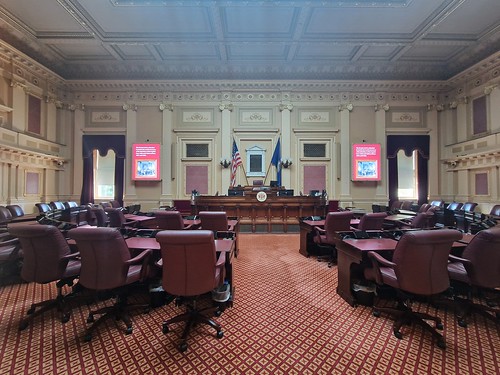 The Senate of Virginia, also still in use today, on a similar sitting basis as the lower chamber.

I very much enjoyed my visit, although I was there a lot longer than expected and had to rush at quite a pace to my next location, the Holocaust Museum, to get there before it closed. This Capitol building has been well looked after and it was fortunate to survive the 1865 Burning of Richmond following the end of the Civil War, but it got through that pretty much unscathed. Back to today, I was very pleased to get such an enthusiastic guide who was knowledgeable about the building and had a conversational style of explaining the Capitol’s history. All very lovely.