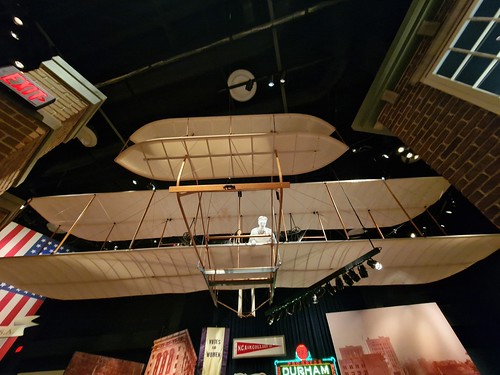 This is a reproduction of the Wright Flyer, important because it was the first sustained manned flight in the world and it took place at Kitty Hawk, which is in North Carolina. And it seems fair that this museum should make quite a thing of that. I’ve seen the original in the National Air and Space Museum in Washington, but I hadn’t realised that it was on display at the Science Museum in London between 1928 and 1948 due to arguments between Orville Wright and the Smithsonian. That all revolved around Charles Walcott refusing to credit the Wrights with their achievements and wanted to give credit to his friend Samuel Langley, later causing great damage to the reputation of the Smithsonian. But I digress and this is an impressive replica of the original. 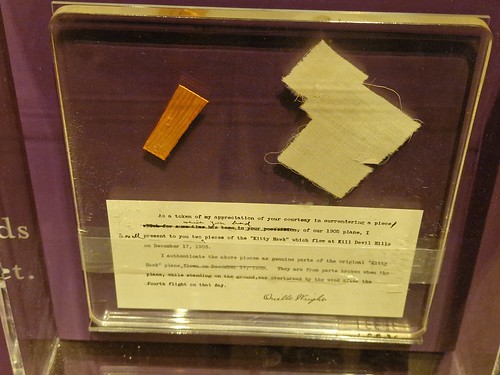 I was just pleased to see this, bits of the 1905 plane and a letter from Orville Wright. The covering of the plane in Washington is a replacement, so it’s quite exciting to have seen this early bit of fabric. And it’s quite a thing to think just how aviation has improved in such a relatively short period of time. As an aside, this looks to be the item auctioned in 2014 at https://www.bonhams.com/auctions/21652/lot/108/, I would have thought it was worth more than $10k (they flog off even small bits of modern aircraft for quite large sums), but then again, I’m not really an expert in early twentieth century fabric from aircraft.