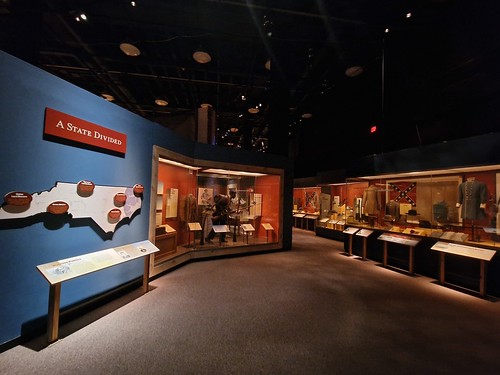 It’s true that there is a lot of Confederate ‘stuff’ at the North Carolina Museum of History, which is very well reviewed on sites such as Google and TripAdvisor, but there are occasional posts such as at https://www.everywhereist.com/2016/02/the-revisionist-narrative-of-the-north-carolina-museum-of-history-raleigh/ which question the intentions of the museum staff. Although to be fair, these are very rare criticisms of the museum indeed compared to the number of positive reviews that are made. It’s sitting at 4.8 out of 5 on Google Reviews, which is realistically as high as museum ratings go.

I don’t want to get overly involved in the matters relating to the Civil War, but I have been interested in how this subject matter has been covered in institutions that I’ve visited in the region. There’s a need to avoid sensationalising it, or indeed putting it on a pedestal as was done literally in the early twentieth century, but there’s still a clear requirement to tell the story of something so important to American history. The hatred and intolerance that led to the Civil War continued in a different form after the end of that conflict, and in many ways continues to this day in terms of inequality of opportunity. 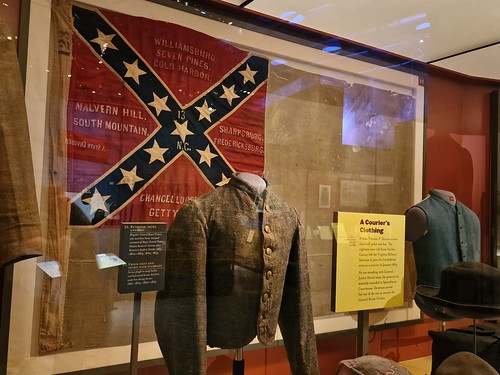 On that theme, I’m disappointed when there’s sometimes outright abuse of museums rather than a positive discussion on how displays are presented. It is possible to argue why is there a confederate flag in this display? This is the Confederate Second National Flag that was carried by the 13th regiment of the North Carolina Troops into the Battle of the Wilderness. But, I’m not sure where else these flags are supposed to go. You can’t fly them on the top of Government buildings, they have to be put in storage of some kind as part of the nation’s heritage and I don’t see any advantage in putting them into a cupboard where the public can’t see them. The museum does have a few of these flags, and it might be useful to place them all in one cabinet so that the imagery is only shown once, but they’re all telling a different story and relating to different parts of the Civil War. 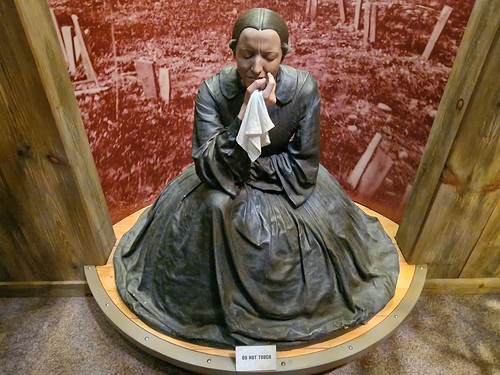 I’m not sure that I hold this imagery is problematic, it’s showing that 35,000 North Carolina Confederate soldiers died during the Civil War, leaving families devastated. And it’s the case that this disastrous war left victims all over the place, not least amongst the wives and children of those who died defending a cause that was perhaps always going to be in vain. 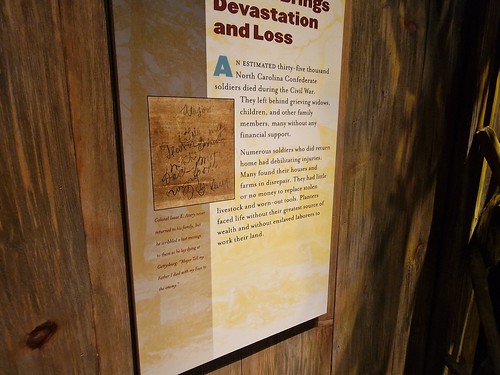 I’m going to claim that this is accurate rather than political. One element that German and Polish museums refer to a lot about the end of the Second World War is the vast displacement of peoples in forced resettlements where Germans were moved west and Poles took their place. I’m not sure that’s a “woe is me, the poor Germans”, it’s far more showing the huge damage that was done by the Second World War. The way German institutions handle the Second World War is perhaps relevant here, and it’s usually done in a similar manner to this museum which is to be informative and not really to hide anything. Being respectful is important, using carefully language is essential, but there’s still a story to be told. 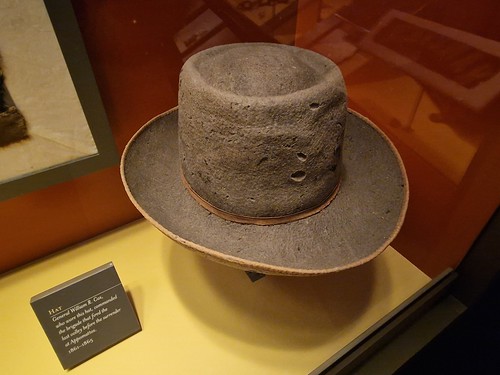 This hat was worn by General William R. Cox (1832-1919), the commander of the brigade that fired what transpired to be one of the last volleys from the Confederate side. He seems a complex figure, he was the 10th Secretary of the United States Senate from 1893 until 1900 and played a substantial part in national politics after the country came back together as best it could. 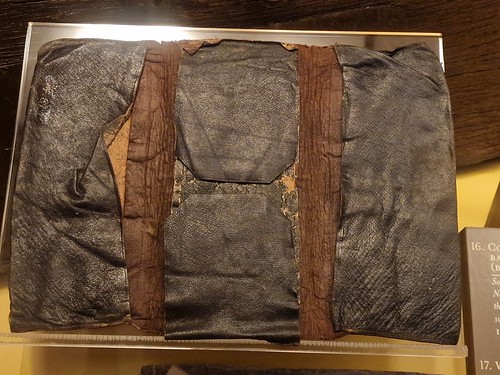 The wallet that belonged to Colonal Thomas F. Toon that he used during the Civil War. 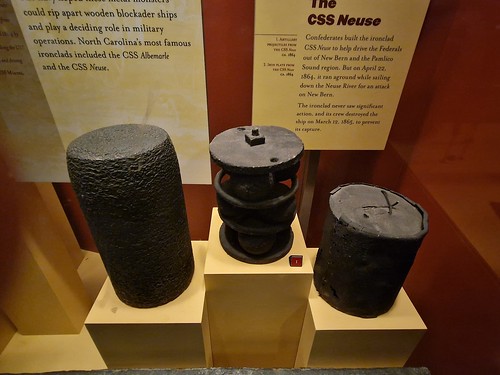 Items from the CSS Neuse, an ironclad boat that was launched in late 1863 and spent some time stuck in the mud before it was scuttled by the Confederates on 12 March 1865 to stop the union forces using it. The remains of the boat were raised in 1963, a century after it was launched, and these are artillery projectiles from it. 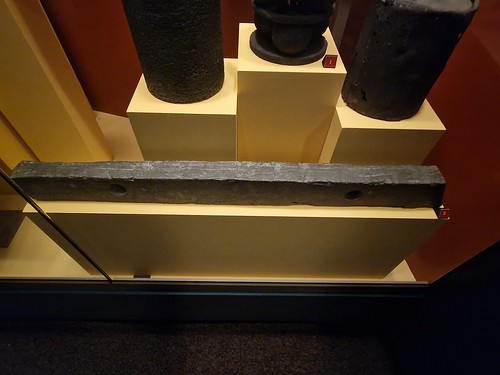 And iron plates from the ironclad.

But, back to the museum. Personally, I thought the museum curators had done the job that they needed to do, telling this part of the state’s history and explaining the damage that the Civil War did to the country. Confederate troops were brave, which doesn’t mean that they were right in what they were fighting for, it’s just an unfortunate fact in many ways that the men fighting often do their very best in difficult circumstances. That the slave owners themselves were exempt from going to war just shows the futility of the cause in which those men were fighting.

There are large exhibits at the museum on slavery as well as the civil rights movements during the twentieth century, so these topics weren’t ignored. But I’m not sure there’s anything to be scared of by saying the Confederate troops were courageous and their almost inevitable demise didn’t have a huge impact on their families. That’s the cost of war, division and hatred, I’m not sure that it can be much disregarded. But, I accept, it’s not for me to say what should be in the museum, the communities who live in North Carolina will have to decide that for themselves. And the displays have been there since 2011, so they’re probably in need of an update, but I hope they continue on a similar theme to what they have, but building and improving. 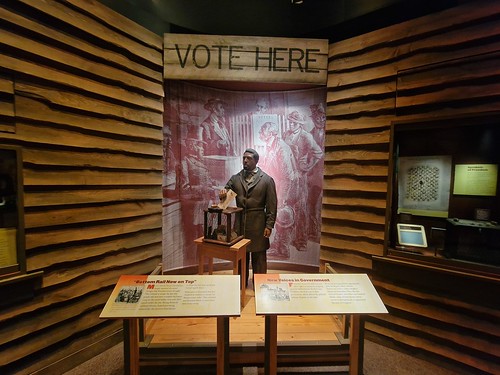 Unfortunately, despite the right to the vote for black men, as the museum notes, this wasn’t accepted by many in North Carolina. That lack of tolerance led to the next disaster for civil rights, the Jim Crow laws, which as I mentioned, the museum moves onto next.

Anyway, I’m sure there are always improvements that can be made to the text of panels in the museum and many institutions are quite rightly working through that process to ensure wording and terminology is appropriate and inclusive. But my general thoughts about the museum as an outsider was that it followed good practice in telling the story of those who fought in the war, which it would be odd to just miss out. I didn’t leave the museum suddenly deciding the Confederate cause was somehow misrepresented, just a little more knowledgeable about how much damage was caused to North Carolina by the Civil War. That messaging seems appropriate to me.