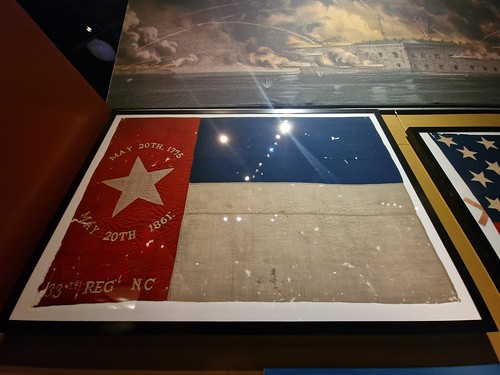 This is a powerful piece of history, the North Carolina state flag that was carried by the 33rd regiment of the state’s troops into what became known as the Battle of New Bern on 14 March 1862. As misguided armies go in the history of warfare, it’s perhaps the confederate army that seems the most tragic as great chunks of those fighting were conscripted and many were there because they were defending their state out of loyalty. It’s true they were fighting for the right to hold slaves, although, conveniently for wealthy slave owners, if you ‘owned’ 20 slaves then you didn’t have to take part in the war. Very handy that was.

800,000 men from the confederate states went to fight in the American Civil War and 260,000 of them died in the process, they were outnumbered and out-trained by the army of the United States. And that’s what makes this so tragic, thousands of people fighting for a highly dodgy Confederate cause where they were under-trained and never really with any hope of winning. The names of 2,937 men who served in the North Carolina 33rd regiment are listed at National Park Service web-site.

Another thing that I find interesting is that date on the flag, the 20 May 1775, which is still on the state flag of North Carolina today. It relates to the Mecklenburg Declaration of Independence, which for a long time the state thought was the first declaration of independence from Great Britain. But, in truth, it’s almost certainly a fake and no evidence for its existence has remained. 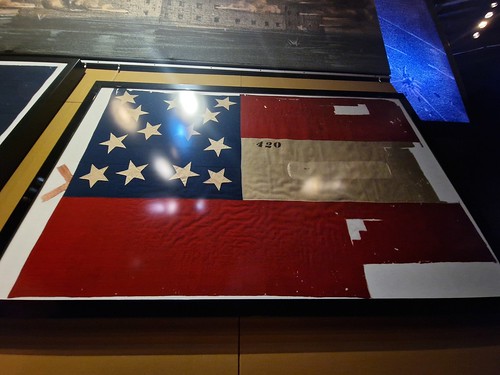 This is the Confederate First National Flag, carried by the 34th regiment, and this was captured or surrendered at the Appomattox campaign in April 1865, right towards the end of the Civil War. The names of 2,366 men from the Confederate army are listed at the National Park Service web-site. The flag likely saw numerous battles as it was made in around 1861 and it survived until the last major conflict of the war. I suspect the squares were cut off as souvenirs, although fortunately the majority of the flag has remained in one piece. This reminds me of when I saw, with not inconsiderable excitement, the Star Spangled Banner flag in Washington where previous owners had flogged little bits off.