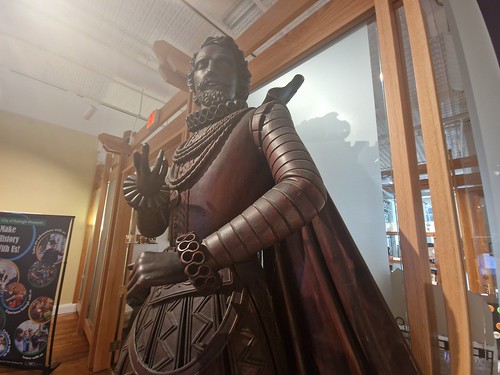 I was clearly lax in my reading of the history of Raleigh in North Carolina as it wasn’t until I got to this museum that I realised where the city got its name from. I had stupidly assumed that it was someone called Raleigh who had funded the city or something similar, but it is all a bit more prosaic as it’s named after the great British statesman Sir Walter Raleigh (1552-1618). And here he is in statue form in the museum.

Raleigh had the honour of having a city named after him because when they were laying the new state capital out in 1788 they decided to commemorate him as he was the sponsor of Roanoke Island, the ‘lost colony’. As an aside, people have been arguing how to pronounce Raleigh for at least 175 years, which is something in itself. I think the explorer’s surname should be pronounced ‘ral-lee’, but Americans tend to go for ‘rah-lee’, which has also impacted on how their pronounce their city’s name. And it all goes back to the word ‘ra’ meaning deer and ‘lea’ meaning a clearing, so somewhere in England in the tenth century or whatever there were some deer in a clearing and now there’s an American city named after them….