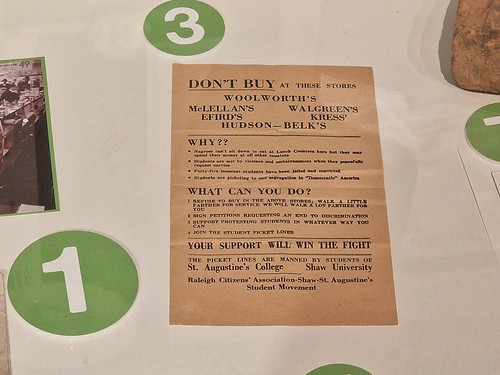 It still seems remarkable to me that at the turns of the 1960s there was segregation at lunch counters in Raleigh and other cities across the United States. This is a leaflet encouraging people to boycott companies such as Woolworths and Walgreens where segregation was enforced, with these campaigns being mostly organised in Raleigh by students at St. Augustine’s College and Shaw University. The latter of those establishments is important as it’s what called an historically black university, namely one which educated black students in the days before educational segregation was brought to an end with the 1964 Civil Rights Act. St. Augustine’s College also has a proud history of educating black students, being founded by the Episcopal church in 1867 to give freed slaves education.

This campaign, and others like it, were successful and lunch counters in Raleigh were made integrated on 19 August 1960. Alongside other North Carolina cities as Greensboro, the peaceful protests caused large economic losses for the companies as well as raising the rather obvious issue that it was ridiculous to have segregated counters. As an aside, it’s an interesting quirk of history just how popular lunch counters in drug stores, such as Walgreens, became and perhaps something of a shame that they mostly fell of fashion in the 1970s and 1980s.