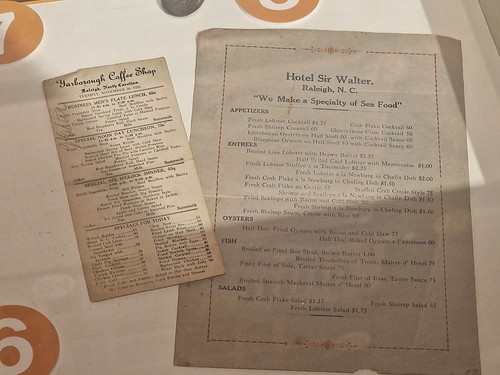 There are two menus on display in the museum, the one on the right is from the 1950s and is from the Sir Walter Hotel. But, it’s the menu from 1926 (Tuesday 30 November 1926 to be precise) that I thought was the more interesting, from the Yarborough House Hotel, which burnt down in 1928 and was never rebuilt. During its period of opening it was the place to be seen, and numerous Presidents, including Presidents Johnson, Roosevelt, Taft, and Wilson.

Frankly, some parts of the menu sound hideous, although each to their own, but the pigs brains with eggs don’t really appeal to me, nor do the chicken giblets. Although having written that, there’s a chicken pan pie, which I think is another way of referring the rather delicious chicken pot pie. There’s an appearance of Chop Suey, which at that time was a relatively new dish that was created for Americans along the lines of Chinese food. The phrase “French Fries potatoes” was also relatively new at the time, indeed they sound quite exotic served alongside the broiled bluefish.

As a museum exhibit, I liked it, it’s a snapshot of culinary history in the United States from 100 years ago.