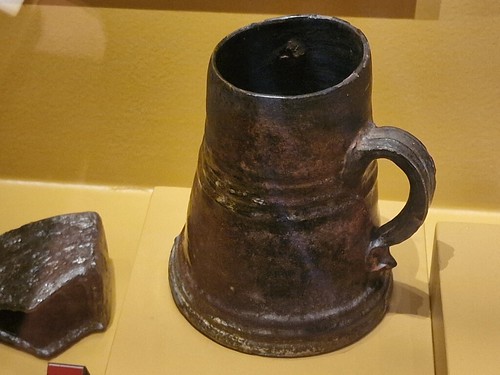 At least I can’t be accused of clickbait with such a boring post name title.

But, it’s a little more interesting that I might have suggested by calling it an old jug. It’s actually a tankard which was found in what is now Martin County, off to the east of North Carolina. It’s notable as it’s the earliest surviving European style ceramic piece found in the Americas, dating from somewhere between 1680 and 1720. I think there’s a little bit of magic in that, something which has survived for so long and which had some considerable meaning to its original owner.

Incidentally, as some back history to all of this. Although the tankard itself isn’t connected to this, it isn’t that far (about 75 miles) from Roanoke Island, the mysterious lost colony that was founded by Sir Walter Raleigh and then disappeared from the record. And I mention this also because Raleigh is where the city name comes from, the locals named it after him.