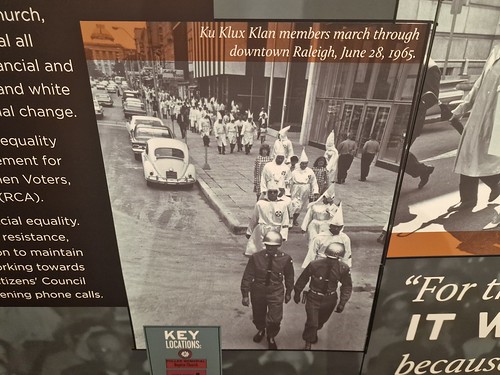 I find the civil rights movement in the United States as a haunting, although fascinating, piece of history, not just because it was so long in coming, but also because they’re still nowhere near the equality that they strived for in terms of opportunity. I always had a belief that the membership of the Ku Klux Klan (KKK) was more secretive and individuals didn’t want to be identified, but there are no covered faces on this rally in Raleigh that was held on 28 June 1965. This wasn’t a small movement either, in the following year there was a march in the city that was attended by 1,800 members of the KKK. This article suggests that there were just under 10,000 members of the KKK in North Carolina in the 1960s, a higher number that I had realised before visiting this museum.

This article is also interesting, a reminder that the children taken on the march by their KKK parents are still perhaps in their sixties, none of this is really that long ago. Anyway, best not to dwell too long on this, but it’s an inescapable part of the city’s history.