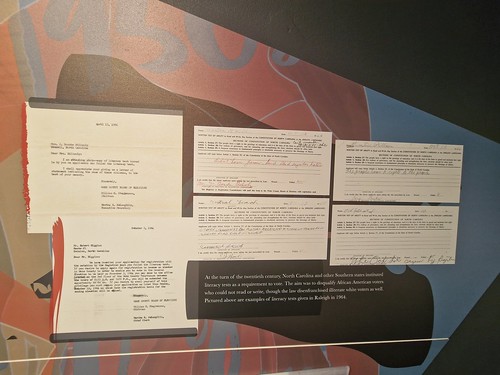 They were certainly creative in North Carolina in finding ways to limit the black population from voting in elections. Although the policy of being able to read and write also limited poorer and less educated white voters as well, its aim in the southern states was to restrict the number of black voters. This was a thing in the United States between the 1850s and the 1960s before it was outlawed, although the principle was also copied by South Africa for the same purpose. The letters in the above photo date from 1964, shortly before the tests were outlawed nationally.

As an aside, there’s an interesting debate the other way, namely about forcing everyone to vote. This is the situation in Australia and I’ve always thought it’s an intriguing and positive thing, as it makes it harder for more extreme candidates to get traction. Alastair Campbell has mentioned this on the excellent ‘The Rest is Politics’ podcast this week following his interview with Julia Gillard, it’s a concept that should perhaps be explored and all a far cry from when authorities wanted to deliberately limit the number of people who could vote.