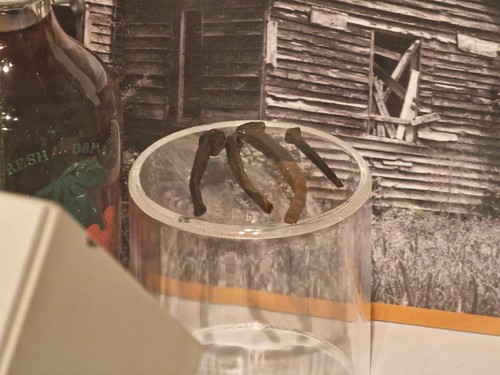 Without context, I accept that this isn’t the most riveting display I’ve ever seen in a museum (and there’s a pun there with rivets, but readers can write their own….). However, they’re iron nails from Isaac Hunter’s tavern from when it was first constructed in 1769. And this building is important, because in 1788 the State’s General Assembly declared that the new capital of Raleigh must be built within ten miles of the tavern. Talk about how much this must have been important to the politicians of the time, it’s like the House of Commons declaring that any new city has to be constructed near to a Wetherspoons.

And here’s the tavern in the 1970s. It was a little bit rediscovered (primarily as a previous owner had moved it from its original location) and it had been used for many purposes since its early days as a tavern, including being split up for domestic purposes and also redesigned to be a stable. However, I understand that instead of saving this, it was torn down and I’m guessing that’s when they sent some of its nails to the museum. I’d bet that at some stage in the future this will be rebuilt, it’s too important for Raleigh to be ignored and all that there is at the moment is a heritage sign to mark the location.

The conclusion of all of this is that I like nails with a bit of history to them.