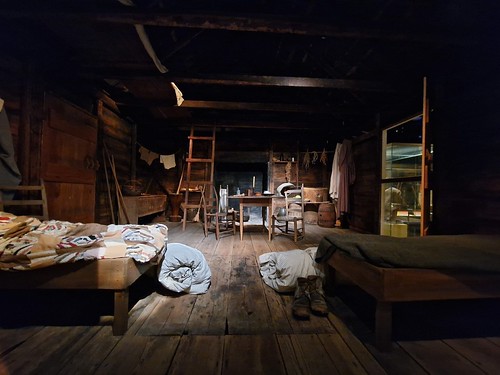 I thought initially that this was a recreation of some hut used by gold miners, since it was located next to the display about the history of that subject. However, it’s an actual one-room building that was moved to the museum in the 1990s and it was once lived in by seven African American slaves. It once stood in Martin County, which is off towards the east of North Carolina and it was moved here as it would otherwise have been lost to yet another road widening project in the state. Although it might look cosy since it’s in the middle of a warm museum, I can imagine that this was a damp and miserable structure in which to have to reside.

One thing the museum mentions about this recreation is that there aren’t large numbers of possessions surviving which were once owned by slaves, as they were hardly from a prosperous class. Instead, their story has to be told in different ways and imagining seven people shoved into this small space with few possessions seems a powerful way of telling that story. And there’s a limit to how much can be said about the people who lived here, as even though attempts have been made to establish who the residents would have been, there isn’t enough documentary evidence to let their story be told in that way. There is far more information available about the ‘owner’ of the slaves, who was Andrew Jackson Purvis, but it seems wrong to make this post about him.

One of the shocking (to me anyway) statistic is that there were around 331,000 slaves in North Carolina in the years before the American Civil War, which was around a third of the state’s population. That’s a lot of people by any measure and 160 years ago isn’t really that long away in the country’s past. And the politicians in the state’s General Assembly weren’t going to change much, as 85% of them owned slaves in 1860, which is more than in any other state.

As another aside, I’m also going to come back in a post shortly about whether the museum is racist and pro-confederate in the way that it shows its exhibits, as I’ve noticed a few articles about this, although very few negative reviews from visitors. As a slight spoiler about this, I didn’t have the same depth of concerns about the museum, but more on this later.