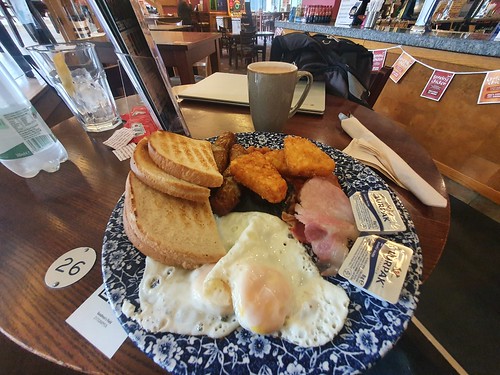 The standard JD Wetherspoon breakfast at Goodman’s Field in London, with the bacon seemingly heated under a candle, but everything else suitably hot and appropriately cooked. This is a handy pub given the number of power points that they have, with the venue being clean and organised. It’s not going to win a Michelin award, but breakfasts at JD Wetherspoons are reliable for being of a reasonable quality and usually having one or two obvious faults such as a hard egg or a cold hash brown. 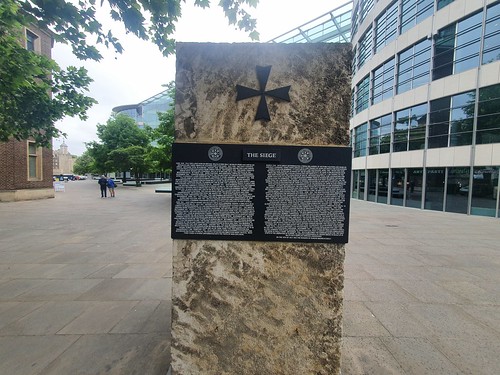 I’ve never previously noticed this memorial located by All Hallows-by-the-Tower church, commemorating the decision to give the entire population of Malta the George Cross in April 1942. The monument was placed here in 2005 and the limestone memorial is made from stone which comes from the island of Gozo. There’s quite a lot of text on the memorial and the Maltese cross image is visible above the information panel. There were many cases of bravery amongst the islanders who stood firm against the attempted invasion by the Axis powers which became known as the Siege of Malta. As an aside, the stone probably needs cleaning, it’s much brighter in images taken a few years ago. 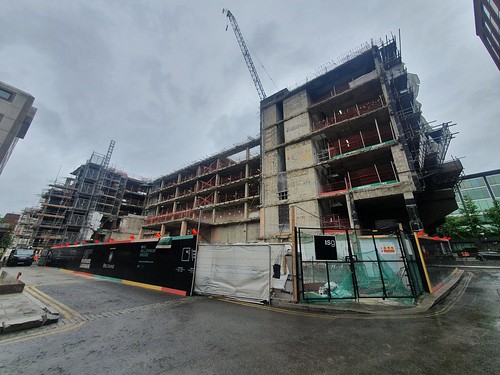 This is the One Millennium Bridge development, converting the former offices known as Millennium Bridge House, opened in 1988, which were used by the Old Mutual. The new development is meant to combine offices, residential and social space, which will also increase the length of the Thames Path. 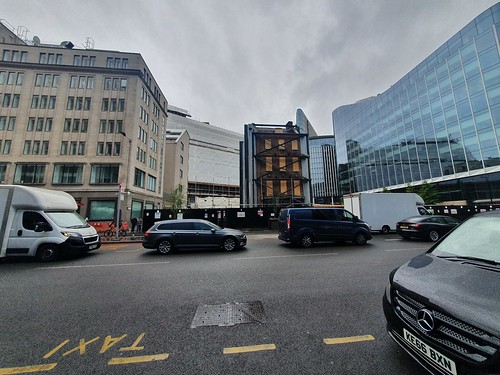 This all feels a little odd, it’s the Hoop and Grapes pub at 80 Farringdon Street in London. Demolition of the buildings either side have meant that the pub is just a little exposed, and rather inevitably, it’s also just a little closed. It was nearly demolished in the 1990s, but fortunately it was saved. I visited in late 2020 as it was listed in the Good Beer Guide, and hopefully that will come to pass once again when it’s re-opened. The building is a brave survivor of demolitions on this street, adding charm and heritage to the area. 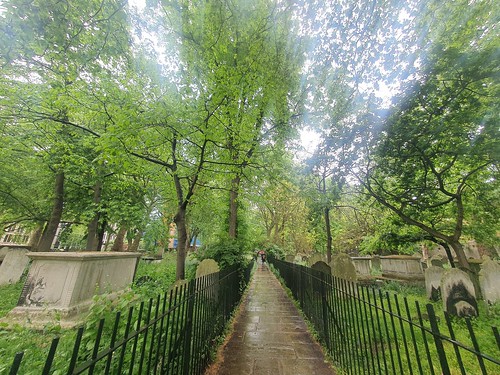 Bunhill Fields, a burial ground in Islington which was in use between 1665 and 1854, with around 125,000 burials having taken place. 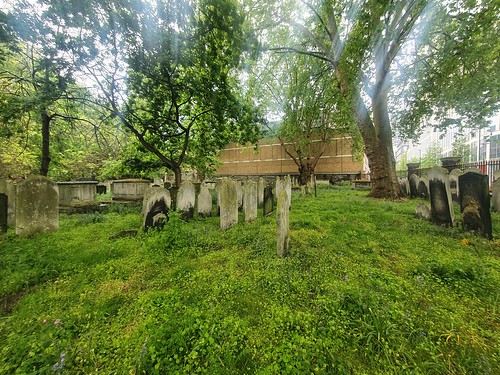 Disappointingly, there’s no public access to much of the site as there’s a large fence separating the central walkway to the graves. 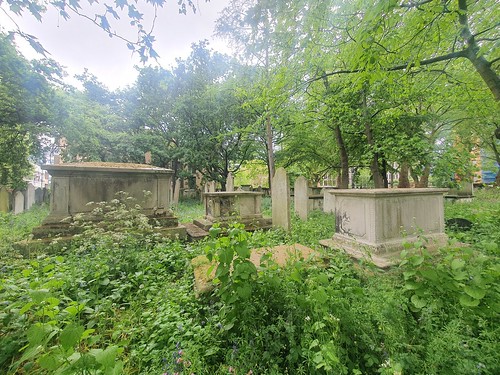 There’s plenty of character to the burial ground and likely numerous rats playing in all of that undergrowth which is inaccessible to humans (unless they happen to have a key). 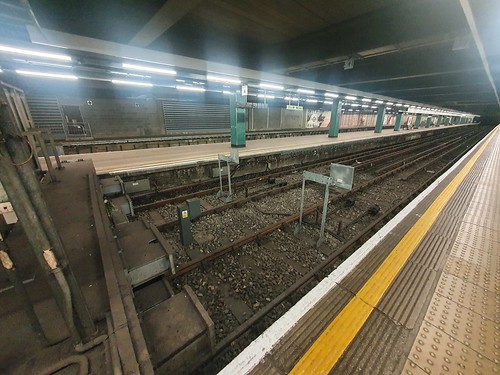 The end of platform at Farringdon Station, where I got the underground service to Paddington. I’ll leave the history of this station to Wikipedia, but I do think of the heritage of the service at what is one of the longest operating underground services in the country, having started in 1863 as the terminus of the Metropolitan Railway. 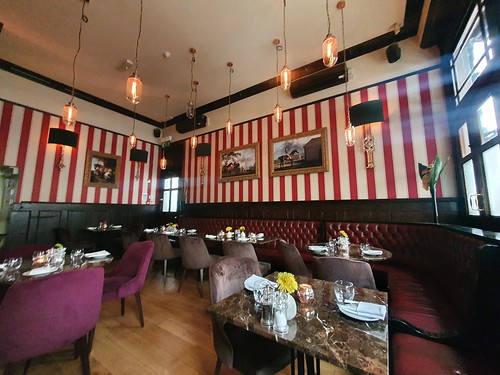 For the second day in a row, I had a meal paid for by The Fork, this time at the Stablehand pub near Paddington, built in 1839 on the site of an old archery range. My table reservation was for 17:00 but I arrived at the pub, completely soaked due to a typhoon which was hitting the area, and the signage said drinks only until 18:00 which didn’t seem ideal. It’s a gastropub in its intentions, having recently opened at what was until 2021 the Angelus French restaurant. The welcome was immediate and authentic, with the staff member merrily giving me the table with a power supply (as in the power supply was located by the table, it wasn’t a table which electrocuted me) which also handily had a hook that I could hang my drenched coat on. 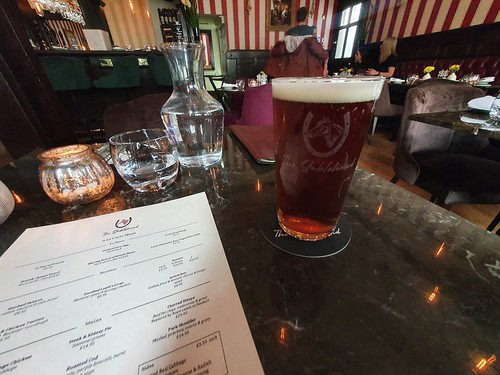 The beer was reasonable, this is the IPA from Rebellion Beer which was well-kept but not particularly exciting in terms of flavour. 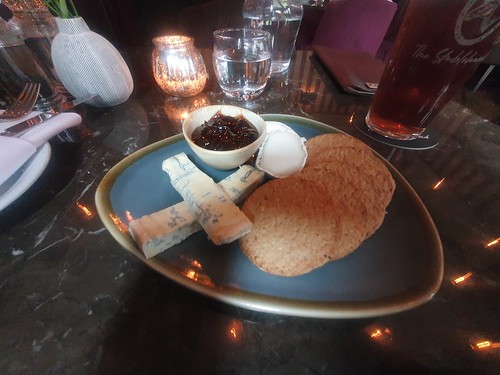 The staff at the venue were friendly, pro-active and helpful, saying that they were happy to see if the kitchen could produce something easy before the food service formally opened. I asked if the cheese board was available, and after checking if cutting cheese would be OK in terms of being easy, the chefs were keen to oblige. There were though a handful of customers who came in and left when they discovered food wasn’t available, it seemed a slightly odd decision to not serve earlier.

Back to the pub though, which is food focused, but is also welcoming to those who just want drinks. They offer a British only menu, so there’s an attempt to source good quality products without the need for importing anything. The cheeses were decadent and delicious, a rich blue cheese and a creamy brie, which isn’t a cheese I usually go for, but was suitably full in flavour. The staff member was also knowledgeable, and I liked that she remembered to come over to take my main course order when the kitchen had opened fully. 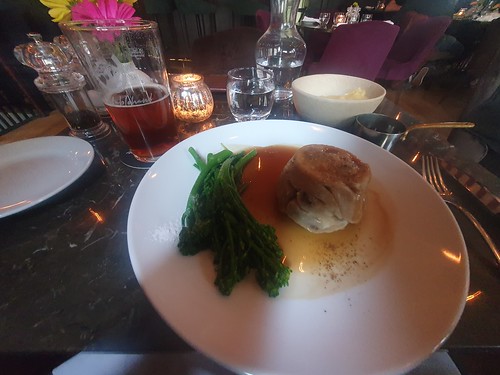 The photography here doesn’t show how decent this meal was, but it’s steak and kidney pudding served with vegetables and with a side of mashed potato. I asked for extra gravy and I received an additional jug which was richer than it looks in the photo, where it gives the impression of being watery. Actually, I’m not sure I would have ordered this meal if I had seen this photo in advance, it all looks a bit insipid.

However, this is probably the best steak and kidney pie that I’ve had, with large chunks of steak which were tender and had no sections of fat on them (I’m quite fussy). There were a few small pieces of kidney, but this pie was all about the steak and the kidney was just a sideshow, which is just how I think it should be. The gravy inside the pie was rich, the steak packed with flavour and the pastry was light. I don’t usually order mashed potato as it annoys me (I get pre-annoyed far too easily), but here it was smooth and not over-packed with anything like butter or cheese. All in all, very impressive. 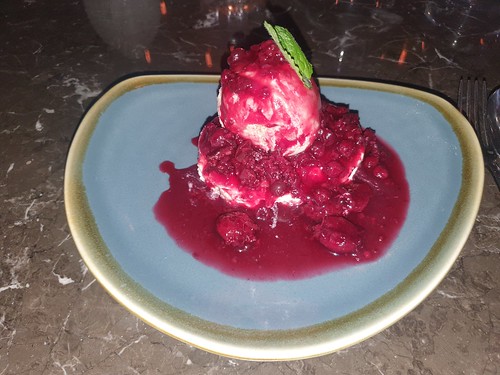 I had hoped for the Arctic roll for dessert, but this was unavailable, so I went for this fruit based explosion instead. My bill came in at under £50, meaning there was nothing for me to pay, so thanks to The Fork for such a suitably delightful meal. I’d recommend this pub, it was informal and comfortable, with the staff being keen to engage and also knowledgeable and attentive. The prices were moderate for the area, with the quality of all of the food and drink being high. 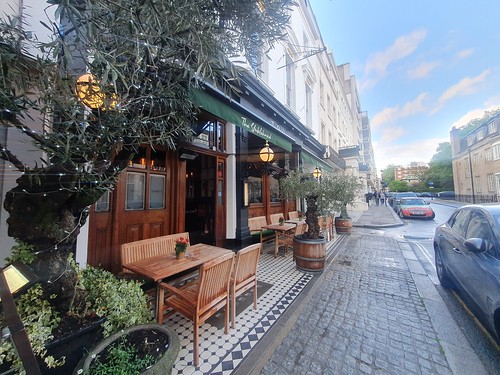 Certainly drier than when I went in, when the road was more like a river. After a short walk back to Paddington, I got the underground to London Liverpool Street, although unfortunately this was the week before the Crossrail service between the two stations was opening. 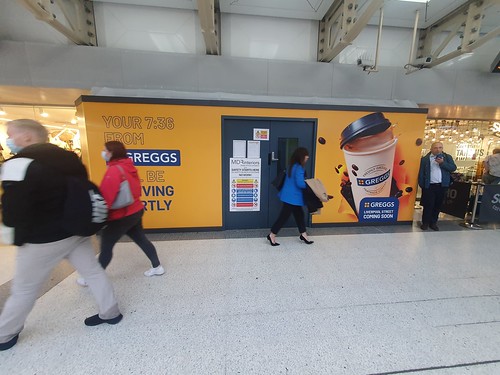 My initial intention has been to position to near Gatwick Airport ready for a flight to Montenegro the following day, but I had instead booked a cheap train home to Norwich. I did notice this hoarding at London Liverpool Street, at least meaning that passengers can be properly fed before their rail departures. 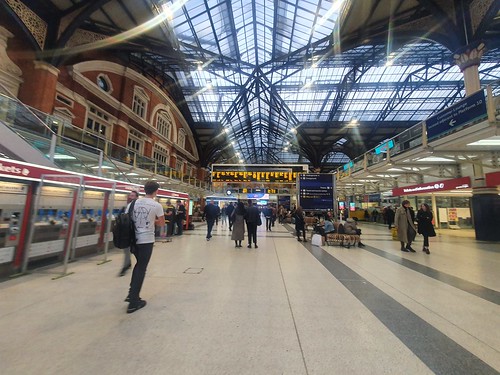 Liverpool Street was busy, but then again, it always seems to be busy. 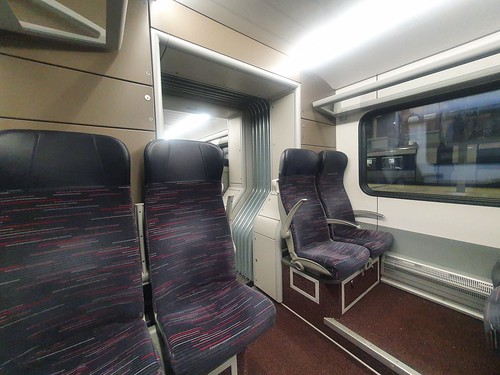 I was yet again annoyed that Greater Anglia were using a train which had no tables, which caused a number of passengers some difficulty trying to position their laptops and devices. The train was busy and Greater Anglia’s obsession with using the Stansted Express carriages on this service remains a complete mystery to me. However, there seems little point in my repeating my general annoyance at this situation, with the train being on time and otherwise clean.