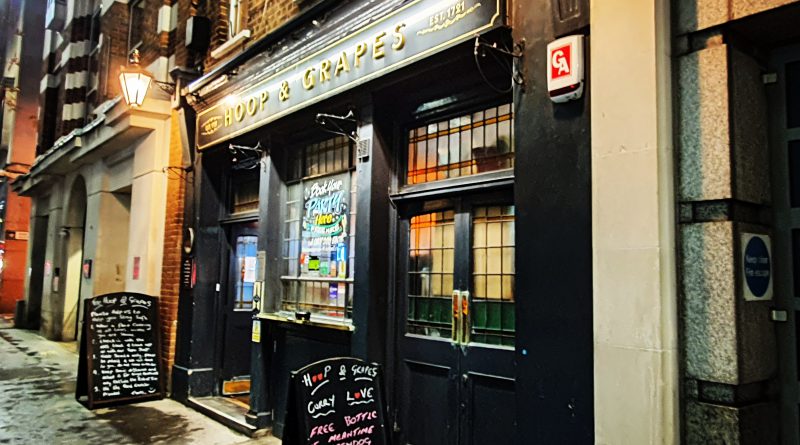 I had a little visit here as it’s a pub in the Good Beer Guide that I haven’t visited before, a rare survival of an historic licensed premises which was nearly demolished in the 1990s. It’s fortunate that it has survived, it’s got some history as being a location for where Fleet marriages took place and it’s also built on a former burial ground. The welcome was a bit stilted with the staff member looking at me confused that I’d come into the pub. At a guess I’d say that anyone coming into a pub and standing by the entrance, where it says to wait, is probably a customer and might need assistance. Anyway, I was seated and when I asked what real ales they had and was told a list of their lagers, which isn’t quite the same thing.

I went for a half a pint of Spitfire and it puzzled me, as the pub must surely have enough volume of this beer to ensure it doesn’t taste off, but this pint was only just on the right side of me sending it back. At the prices charged, I thought it should have been better, especially from a Shepherd Neame pub since it’s their beer.

The rest of the service was much better and was from a different staff member (who I think was the licensee), so there was more engagement and interest in me as a customer. Not that I really needed any interest, but it made me feel more welcome. The pub was clean and organised, with a nice olde world charm. The pub was also following all of the rules, two multi-household groups came in and admitted they weren’t in the same household, with one asking the licensee to turn a blind eye. I’m not sure that’s a very fair thing for a customer to do, but the staff member apologised and turned them away.

I liked the building and the service ultimately was fine, but I’m not sure that there was anything else of interest here beyond the history and heritage. But, it was a pleasant location for a drink and it was relatively busy during the early evening. The pub normally has a good reputation for food, but they’re offering a reduced menu at the moment, mostly curries and snacks. The downside was that it felt like a Greene King pub, but I won’t digress down that line of thinking….