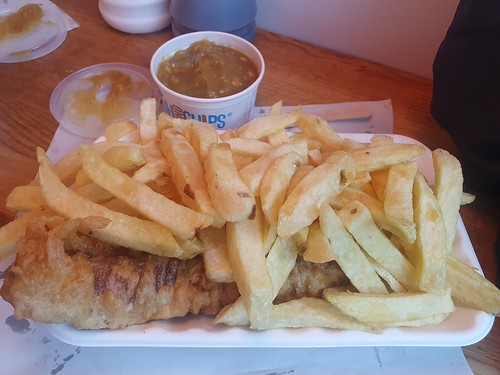 I’ll immediately admit to some deceit and have used a photo from a different day, but this is the delight of Lucy’s Chips at Norwich Market. For the first time, no scraps were available today, but I’ve now decided these are the best sausage and chips available in Norwich, because they use a proper butcher’s sausage and they’re competitively priced. It’s no surprise that there’s nearly always quite a long queue wrapping around their market unit. 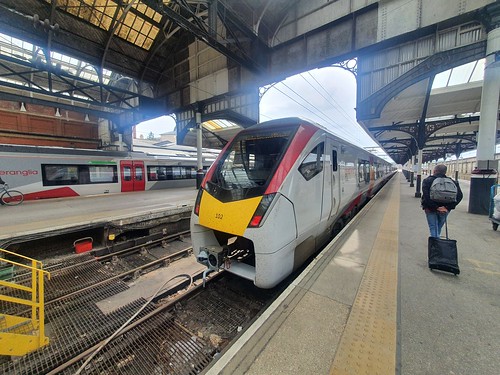 I did have some cheap tickets to fly to Montenegro, but for various reasons, I decided not to go. However, I still had my £5 fare from Norwich to London, so I thought I’d head to the city for one night rather than not use the rail ticket. 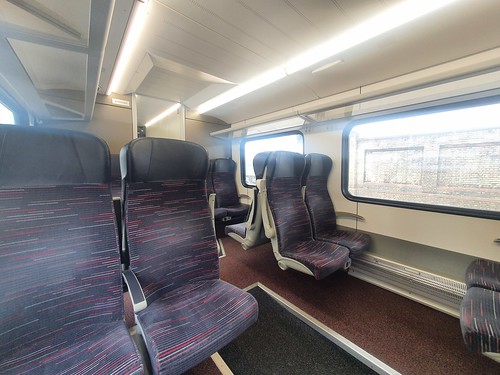 I wasn’t at all surprised or delighted to see that Greater Anglia have shoved another Stansted Express service on the route. Well, actually, I wasn’t entirely surprised at this bloody train being put into service. With no first or catering, neither of which impact on me, this isn’t an ideal train for many customers, nor is the entire lack of tables. I don’t know why people on the Stansted Express aren’t allowed tables, but I’ve questioned that before and Greater Anglia don’t know. I’m unsure why the rail company who spent hundreds of millions on these trains isn’t sure why they don’t have tables, perhaps someone forgot. The guard on board made an announcement apologising for the train, saying that several of the usual mainline trains were currently being repaired. I have no idea why such new trains need such maintenance, but there we go. The train was clean and tidy, getting quite busy when we neared London. I did have another passenger keep talking to me during the journey, but I tried to look as busy as possible, although that didn’t much help. 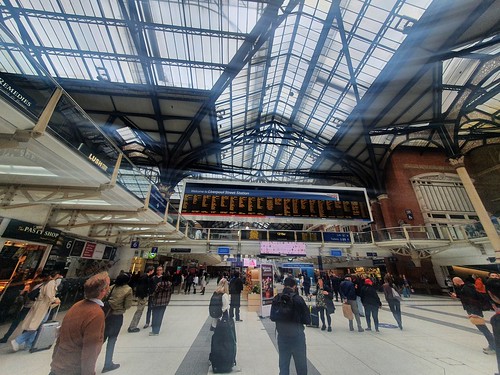 The tableless train arrived into London Liverpool Street on time at least. 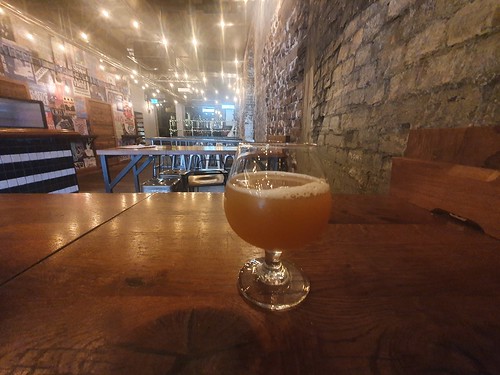 Instead of going to a salad bar, I got muddled up and went to Goose Island, what I consider to be the best bar in London, which I might have mentioned a few times before. This is the IWD2022, a dank and hazy DNEIPA which was fruity, refreshing and beautifully decadent. Brewed on the premises and it’s always a delight to visit this marvellous location. 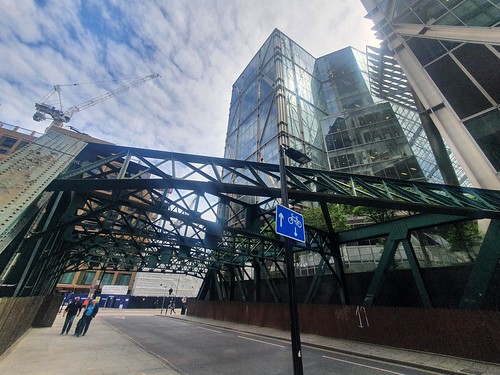 This is Worship Street where a girder bridge is still in place with trains underneath the road sweeping into London Liverpool Street station. I mention this as I have managed to walk by this many times and not notice it was there. Behind me in the photo there was not that long ago a series of railway tracks going into Broad Street railway station, which was one of the countless casualties of the post-war under-funding and poor management of the network. Even Beeching didn’t want it demolished, but British Railways demolished the station and flogged the land off anyway. Today, they’ve have to build Crossrail underneath the new developments, so Broad Street has come back in some form at least.

Clicking on the image makes it larger, and I was standing where it says Worship Street Junction on the left-hand side map. Look at all the railway! 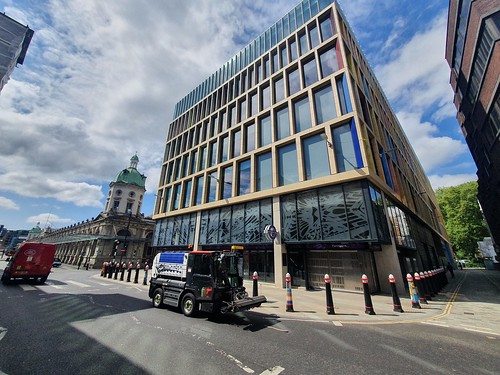 I had decided to walk to Oxford Street, which is about an hour’s walk from Goose Island, since it was a pleasant day and I’m always keen on urban walking. This is Farringdon’s new Crossrail station, although this central section of the Elizabeth Line hadn’t opened when I was in the city, I was one week to early for that. I’ve pinched Crossrail’s press release below for information about this station:

“Farringdon station will be one of the busiest in the UK, connecting with Thameslink and the London Underground to provide links with outer London, the home counties, the City, Canary Wharf and three of London’s five airports. The goldsmiths, watchmakers, ironmongers and blacksmiths of Farringdon, Clerkenwell and Smithfields and the Brutalist architecture of the nearby Barbican Centre provide the context for the design of the new Farringdon station. Two new ticket halls are connected by underground mined platforms. The western end located on the corner of Farringdon Road and Cowcross Street will provide access to and from the Thameslink ticket hall.

The eastern end is bound by Charterhouse Street, Lindsey Street and Long Lane. This major transport interchange site has had to fit within a complex infrastructure network up to 25 metres below ground. The engineering and design challenges here have driven tailored design solutions such as lifts that move on a slope rather than the standard vertical movement. In the eastern ticket hall, the design references the Barbican centre and the design of heavy metal sliding-screen gates has been derived from a barcode for ‘Farringdon’. In the western ticket hall influence is drawn from the nearby diamond and jewellery quarter. A material palette comprising champagne coloured stainless steel cladding and etched glass panels unify design at both ticket halls.”

I’m a big advocate for Crossrail, this will make connections across London much quicker. Even though I try and walk across London as much as I can, this does make things easier and the excellent accessibility for those with disabilities is a real positive as well. 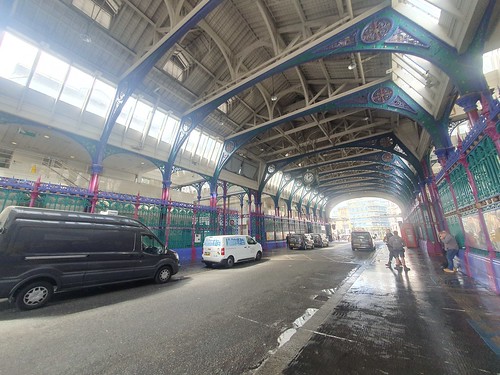 The once bustling site of Smithfields market, which is still there in part, but most of the site is moving location. Much of this will be the Museum of London in a few years, they’re moving from their current location. 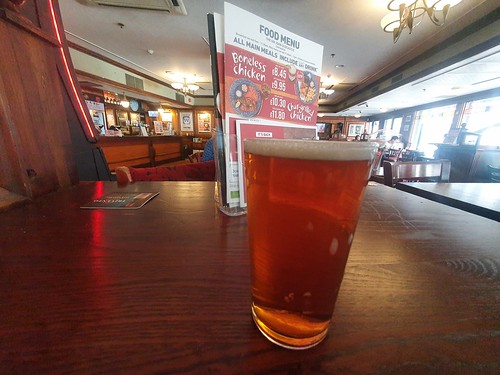 I thought I’d have a quick mid-walk rest and charge my devices up, this is the Sir John Oldcastle pub in Farringdon, operated by JD Wetherspoons. I didn’t have any issues here, friendly staff, well-kept and keenly priced beer with the pub being clean and organised. And there were plenty of power outlets as well.

I had a look at some of the pub’s reviews, and it’s towards the higher end of ratings for the chain, with this one being helpful to me.

“If you want to sit and read a paper or a book, this is the place for you. If however, you want to have a laugh and giggle with friends, go to the castle pub instead. They could do with a manger that will let a group of friends meet up and not kick them out before most of them have finished their first drink.”

I can imagine what “have a laugh and giggle” means in terms of the disruption to others, so this reassures me about the pub’s management.

and they were annoyed the pub wouldn’t let them.

“I came with a coffe cup, ok, I agree it’s not permitted, just left it on the table”

They came with their own coffee cup for the unlimited refills? 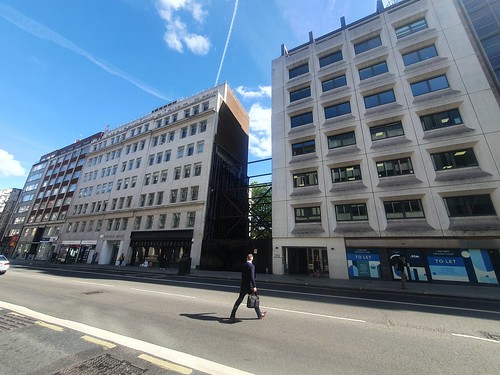 I was fascinated by this missing building and I’m still none the wiser. It’s been like that for at least two decades and there was once a building there, so quite what happened to it, I have no idea. And I’ve never said that this blog actually answers questions and problems…. 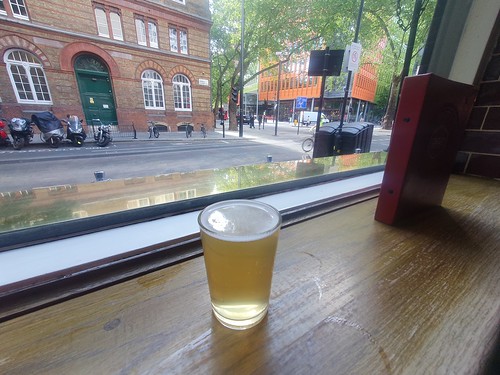 Tzatziki Sour from Orbit Beers, which my friend Nathan has mentioned more times than I’ve mentioned crisps in my life, but it’s a very good beer. 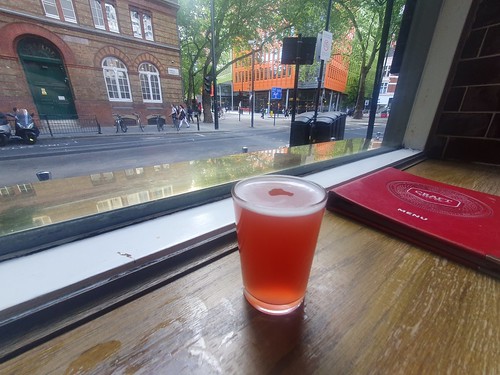 And the This is Not a Soft Drink from Pressure Drop Brewing from Tottenham, who have a taproom that I want to visit. They occasionally have some beers in Goose Island, I had the Escape Pod Cherry Edition last year from the brewery, one of the most decadent and rich imperial stouts that I’ve had. This was a juicy raspberry and yuzu sour, refreshing although lacking a little something. And, no, I don’t really know what an yuzu tastes like, I think it’s lemony. 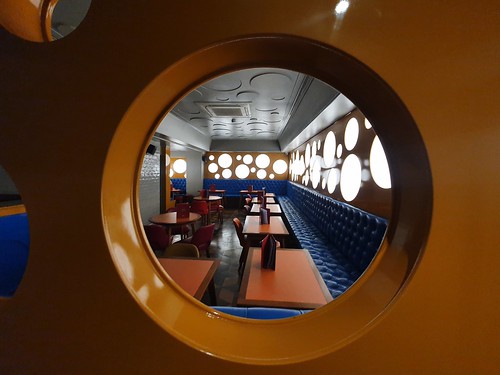 Downstairs in Craft Beer Co in what I considered was a suitably artistic photo. 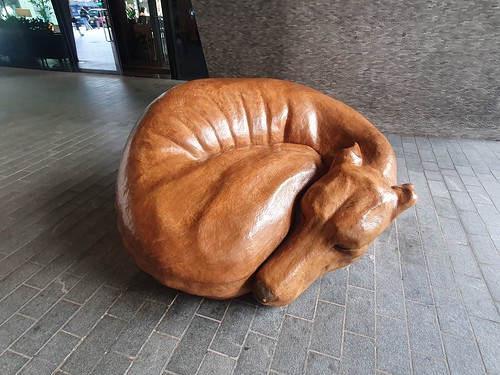 The Whippet Bench at Centre Point which was designed as a seat, although this is rather more style over substance. It was created for the London Festival of Architecture and its relevance here is the architects of the public space wanted people to think about how dogs live in the moment. 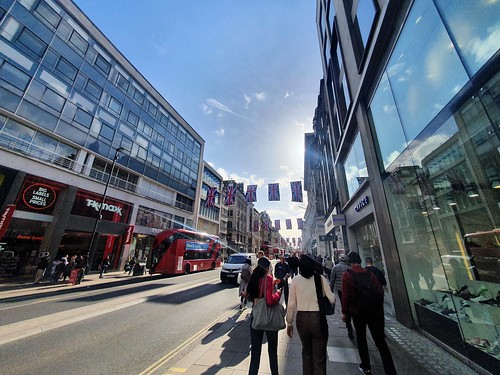 The flags at Oxford Street, and also on Regent Street, have been controversial because some people have compared them to Nuremberg and the Nazi Party. Having been in Nuremberg a couple of weeks ago, it’s hard not to note the similarities and I assume this was considered, but at some point perhaps countries have to move on from what happened 80 years ago with a entirely different flag. Given they’re only there to commemorate the Queen’s Platinum Jubilee which absolutely has to be marked in many different ways, it is perhaps going too far to say that they’re offensive. But I won’t go down the rabbit-hole of politics beyond that. 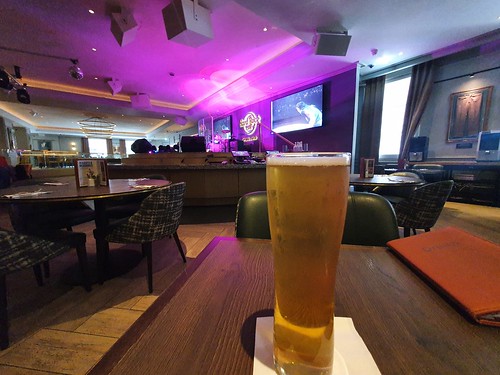 Thanks to TheFork, who I still refuse to praise for their anti single diner policy, who funded this thanks to their numerous offers. I’d add I might not praise them, but that doesn’t mean I’m not going to enthusiastically join in with their deals. Anyway, this is the Hard Rock cafe on Oxford Street, which I’ve written about numerous times, mainly because of previous generosity from TheFork. Service here is nearly always impeccable, and it was thus once again. Although I’d note that they have an odd way of sitting diners next to each other rather than putting spaces between them, which isn’t an ideal situation. I was left with the neighbouring table asking me to explain the British currency, or more specifically, what the coins meant. It isn’t the first time I’ve seen someone disappointed that the 2p isn’t £2 as they had a lot of them and were about to pay for their coffee with them. 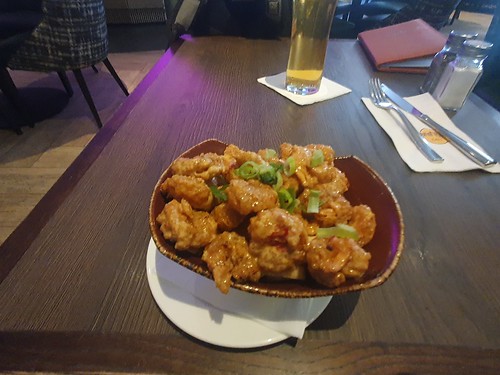 The “One Night in Bangkok Spicy Shrimp” weren’t cheap at £14.75 (thank goodness this wasn’t my money) but this sort of dish is often exciting in the United States in terms of the flavours. It was satisfactory here, but the outside was more hard than crispy. 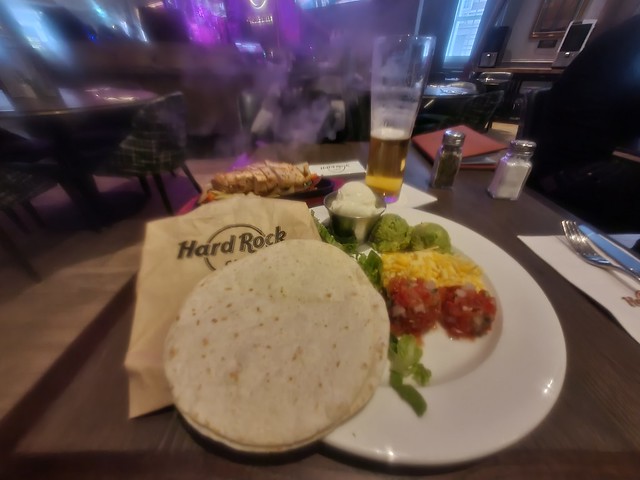 I had a little dilemma here of trying to unstick the sticky sauce from the camera whilst smoke was sizzling from the chicken fajitas, so the photography is bloody dreadful. I’ve got a new camera now though, perhaps the imagery will improve…. Anyway, this was suitably delicious as ever, although four wraps isn’t enough to fit that much food in. Despite now being aged over 14 years old, I still get excited seeing food sizzling as it’s brought to the table. I should probably get out more to be honest. 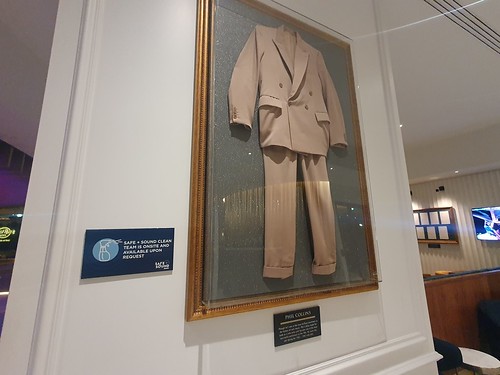 As part of the decor, clothing worn by Phil Collins in 1982. I can imagine a political restaurant, perhaps with a suit worn by Jacob Rees-Mogg in 1987 being on the wall. On second thoughts, maybe not. 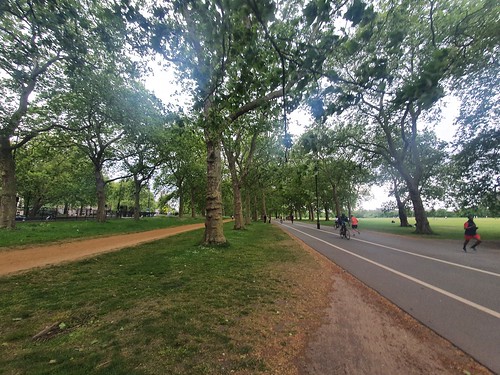 I thought I’d walk through Hyde Park to get to Hyde Park Corner underground, walking past the remnants of the Marble Arch Mound or whatever it was called. This is a cycle and pedestrian lane, although it wasn’t entirely clear to me (or anyone else actually) which was which. 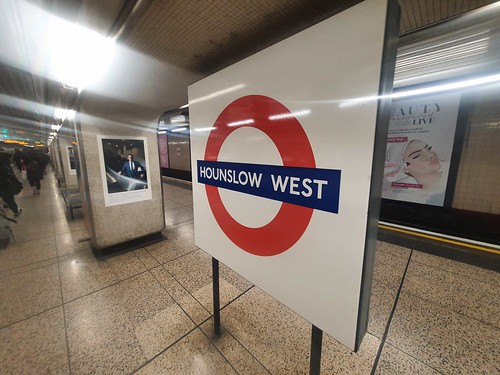 A simple, albeit long, journey on the Piccadilly Line to Hounslow West. It’s possible to do the journey to Heathrow by Crossrail now, but it’s much more expensive than using the Underground, something that they’re not making at all clear. 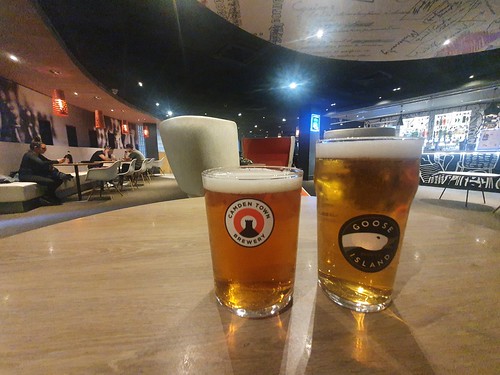 And safely at the Ibis Heathrow with the two drinks proffered to me. I was only at Heathrow as this is where the cheapest hotel in London was, it was nothing to do with the flight I had originally intended to get, which was at Gatwick. Anyway, more about this hotel in due course on my slowly improving Accor web-site. It was good to be back in London, this is becoming increasingly rare given how much the hotels are now costing in the city. Thursday : The Tiny Rebel Tap Takeover at the Brewery Tap in Norwich