There are more photos of my visit to the Head of Steam museum at https://flickr.com/photos/julianwhite-uk/albums/72177720302087058 for anyone who is profoundly bored. 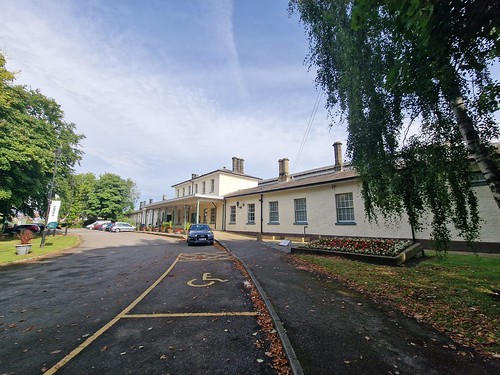 I had been looking forwards to visiting this museum, not just because I like railway stuff, but because the building it is located in is also of significant importance in its own right. 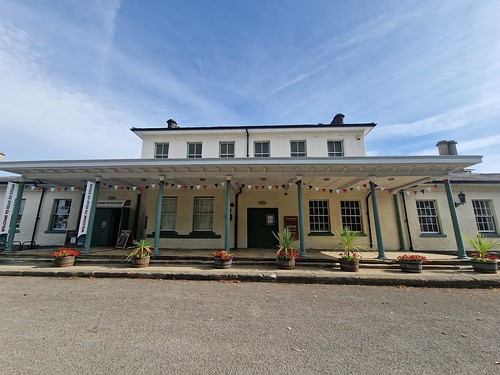 It’s North Road railway station which is around a twenty minute walk from the centre of Darlington and it’s the town’s original transport hub for rail. It was opened in 1842 and although it was expanded later on, its central core is from that original opening. There aren’t that many railway stations that are 180 years old and which still look relatively similar to as they did when they were constructed. 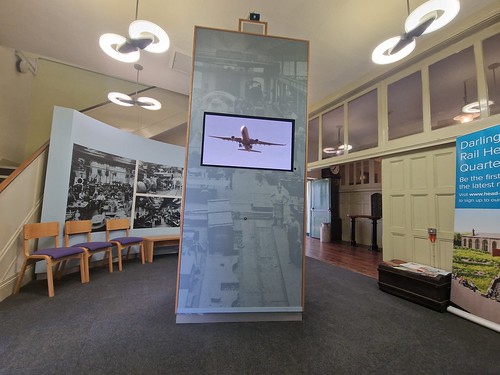 The survival of the building is more through good fortune as the line has nearly been closed on two occasions and these stations are often flogged off cheaply when that happens. Darlington has a main railway station, originally known as Bank Top, which opened in 1887 and that’s much larger and more substantial. There’s an admission charge of £5 to this museum and the team member was suitably helpful, despite my complaining how hot it was outside. I’m not actually sure that she was at all interested in my weather commentary, but there we go. The tour starts with a video which introduces the visitor to the heritage of the site. 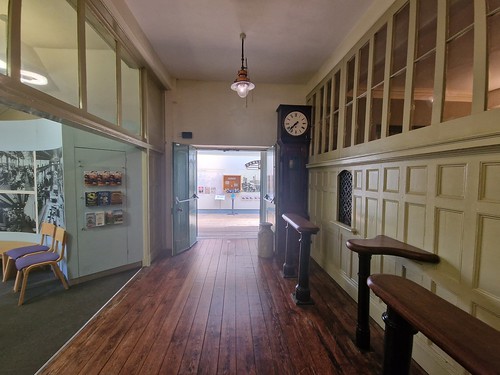 Behind me are the original doors, the ticket desks are to the right (a photo later on shows the other side) and so this is the corridor that passengers would have once used to get to the platforms. 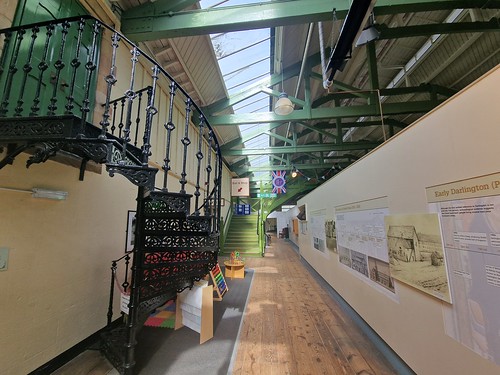 The museum was quiet, just another three or four visitors, and it felt suitably Victorian. A lot of the good fortune here is that the railway station was never really modernised or altered, so things never really much changed. That’s not always ideal for passengers, but it’s very good indeed for heritage. 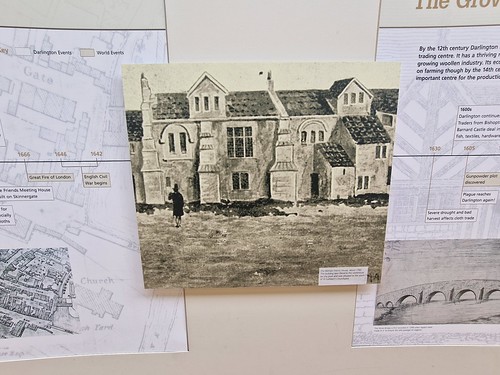 The Manor House in Darlington which I mentioned yesterday. 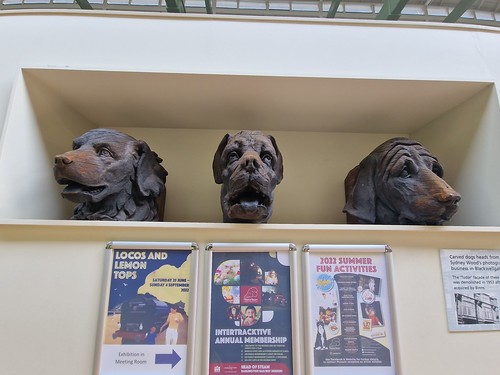 There’s no railway heritage here, I just liked these carved dogs heads. They’re from a business that was located on Blackwellgate in Darlington. 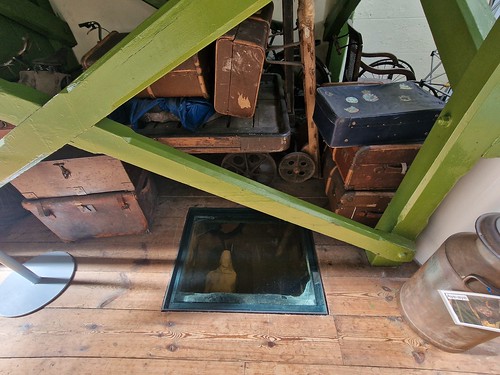 I had never thought about railway stations having a cellar, but this is the porter’s cellar which comprises of four different rooms and had its own cooking area. There’s a story which is explained about how this might be haunted with the ghost of Thomas Munro Winter. I’m oddly intrigued now to know how many other railway stations have cellars. 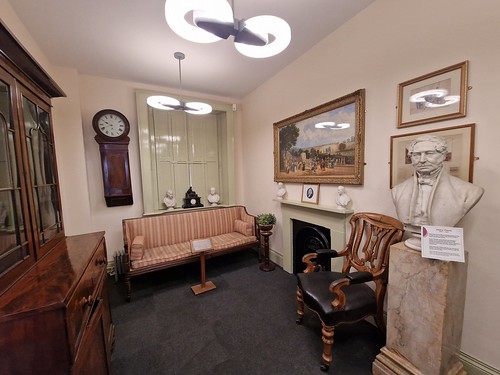 The Pease Room (named after Joseph Pease) and most of the items here have significance to the railways, they’re not random things that the museum has found and shoved in to appease visitors (I’ve encountered that before on my travels….). The sofa at the rear is the one which Edward Pease and George Stephenson sat on whilst discussing the Stockton and Darlington Railway (S&DR), the world’s first to use steam locomotives. The bureau on the left is from the Northgate Estate Office of the S&DR, whilst the chair on the right was used by the directors of the S&DR in the Northgate Offices in Darlington. 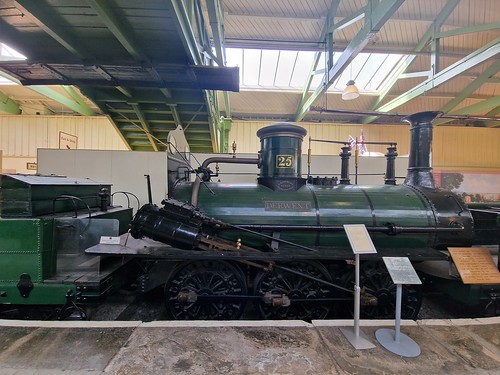 I don’t want to sound like I’m cooing at bits of metal with such heritage, but this is Derwent, built in 1845 for the S&DR. It was used by the railway until 1869 when it was sent to be used on colliery lines. Showing some considerable foresight, when it was made redundant in 1898 it was gifted to North Eastern Railway for preservation, hence why it still survives. For a long time this was on display at Bank Top (now just known as Darlington) railway station, but it’s now on display here on long-term loan from the National Railway Museum. Railway locomotives don’t come much older than this…. 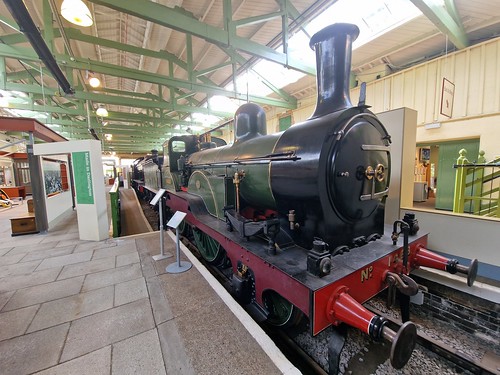 No. 1463 which was made for North Eastern Railway in 1885 and was used primarily to power express trains. There were twenty made and all of them were made redundant between 1926 and 1929, with nineteen being scrapped and so this is the sole survivor. 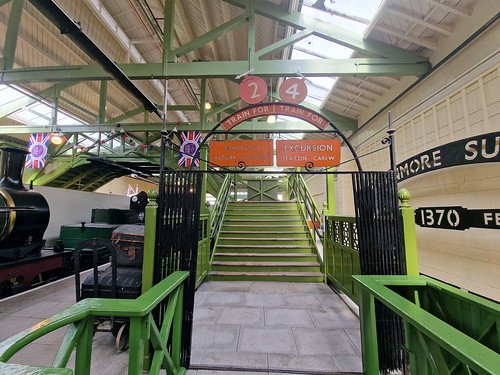 The platforms and bridge over to the other side. To the right, on the other side of that wall, is the other platform which is still in use. More on that later. 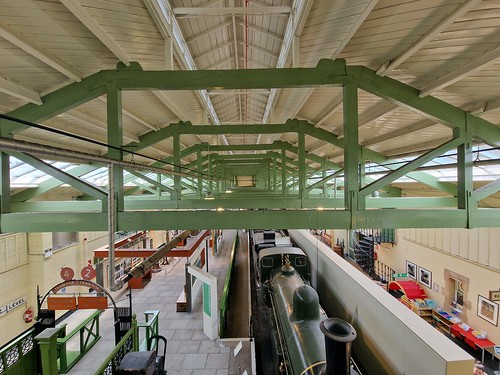 I thought that this would make a nice photo of the museum, but the trusses got in the way a bit. It seemed a waste of climbing the steps to be honest, but I suppose it was some slight exercise. I digress though. 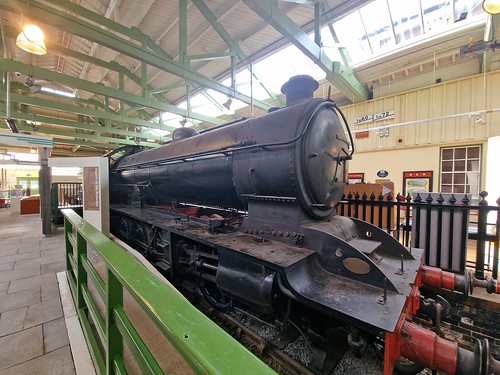 No. 901 which was made by LNER in 1919, one of fifteen and they all remained in service until between 1954 and 1962. Fourteen were destroyed by British Rail, this is again the sole survivor. 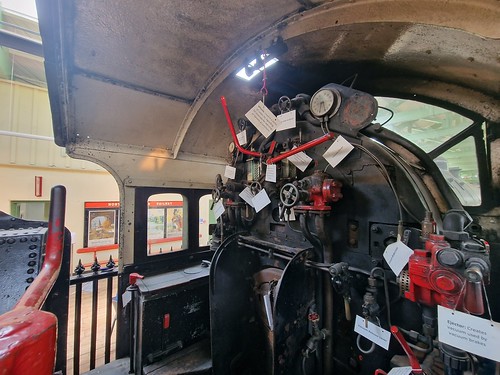 Inside the cab of the No. 901, this is all black magic to me despite all the little labels explaining what things do. I expect my friend Liam would understand this, I think civil engineers understand railway engineering. 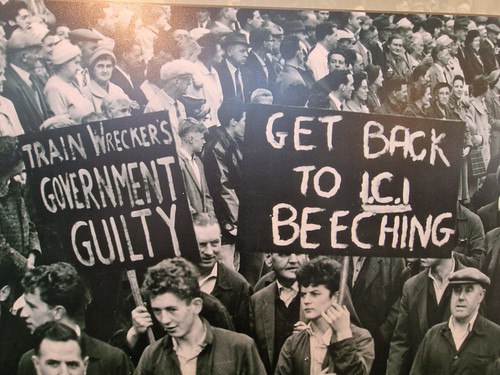 This is from a demonstration that took place in 1963 following the announcement that Darlington Works, which were located by this railway station, would be closed down.

As part of the ridiculous nature of how British Railways operated, the works were expanded heavily in the 1950s, showing a complete lack of foresight given they entirely closed them soon after. The map above (the railway station which is now the museum is at the bottom) is from the early twentieth century, before the works were expanded to be nearly 250,000 square feet in size. The site is apparently now a Morrisons supermarket and I’m sure it’s lovely, but there’s no reason that these locomotive works needed to be closed down, but there was a moderate panic in the 1960s that the age of the railways was coming to an end. 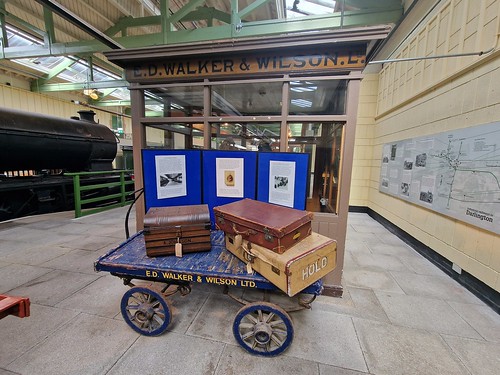 Walker and Wilson, a stand set up to sell books and newspapers to passengers. 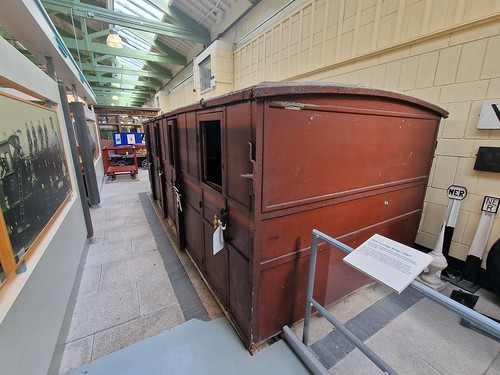 A carriage body made by North Eastern Railway in around 1865. 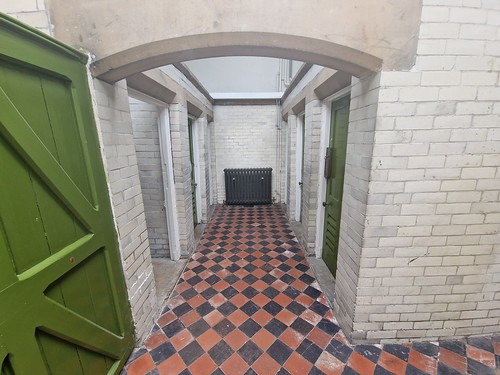 The old toilets of the railway station, from a time when facilities were actually provided to passengers at even relatively small stations. 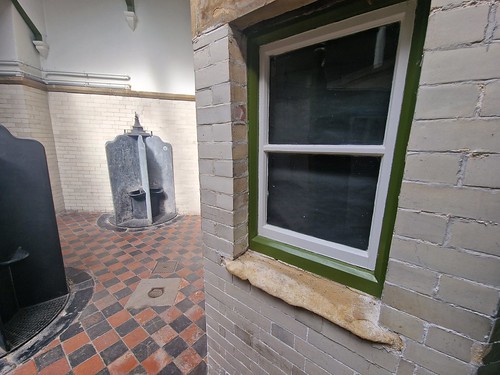 Although, such convenience (excuse the pun) didn’t come cheap, as passengers had to literally spend a penny that was handed over here. The museum noted that toilets were usually not provided on board trains, as they stopped so frequently at stations and for so long, there wasn’t the need. Although that did mean a mad rush for the toilets when the train did stop and I’m not sure that was ideal. 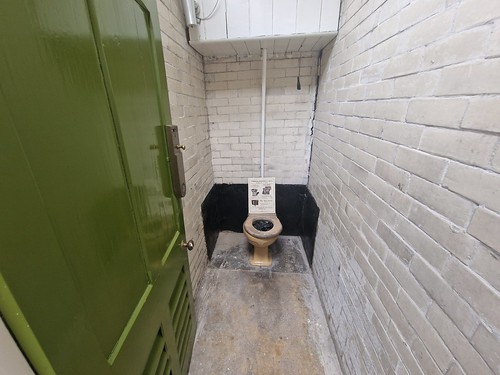 An old cubicle, there were six of these at the station. These facilities at the station remained in use until the building closed in the 1960s. 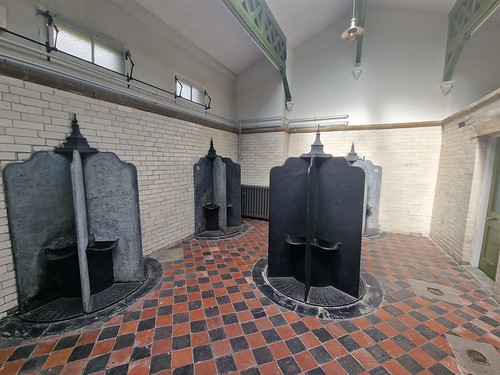 I avoided getting it in the photo, but there is a sign telling visitors not to use the facilities. I’m sure there’s a back story as to why they needed that signage, but I didn’t dwell on that. The facility in the middle is a wooden replica, the others are original and from the late nineteenth century. 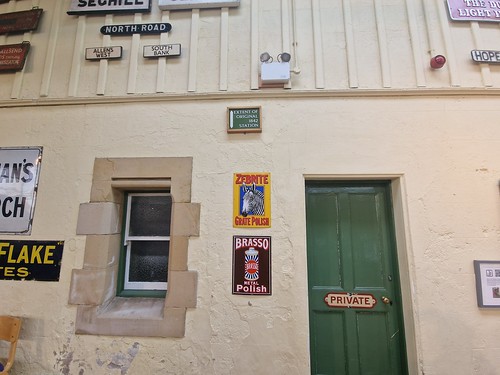 I liked the museum’s obsession with trying to explain the size of the original railway station, and the limit of the 1842 station is marked here on the wall. 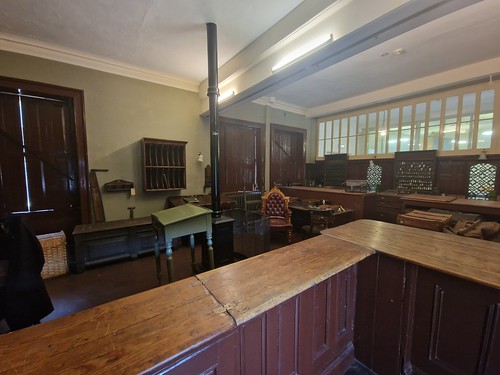 The ticket office and that corridor at the rear is the one I mentioned earlier. 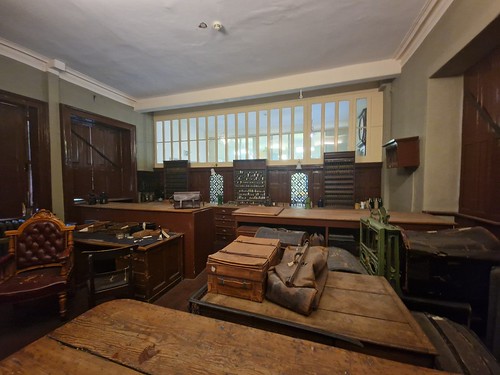 The ticket office also doubled up as a parcel office. Inevitably things changed over the decades, but the museum has tried to explain what every room was used for. Sometimes that’s easier than others, as walls were sometimes taken down or put in when someone had a great plan to fiddle with the arrangements. 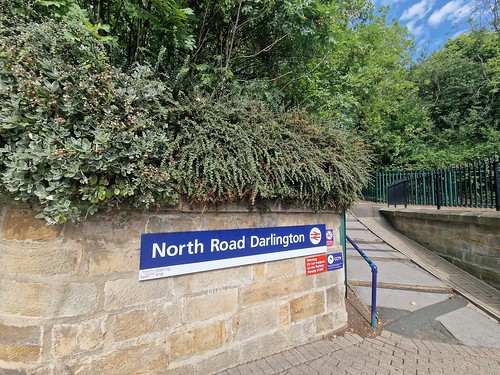 The railway station building isn’t in use today by the network, it’s solely used by the museum. It requires a walk of two minutes or so to a different entrance for anyone who wants to board a train here. 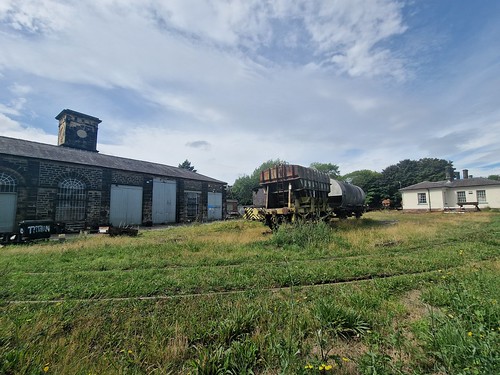 The station yard of the museum is visible from here. 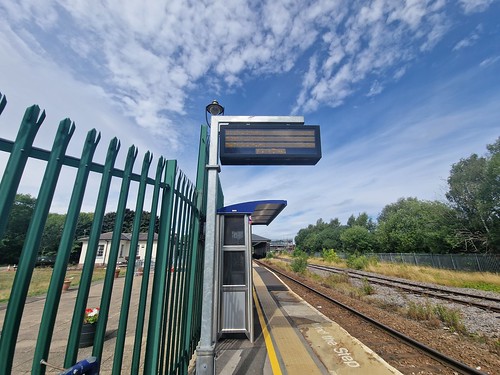 Here’s the railway station that passengers can use, with rather fewer facilities, so no toilets, waiting room, cafe or newspaper stall. 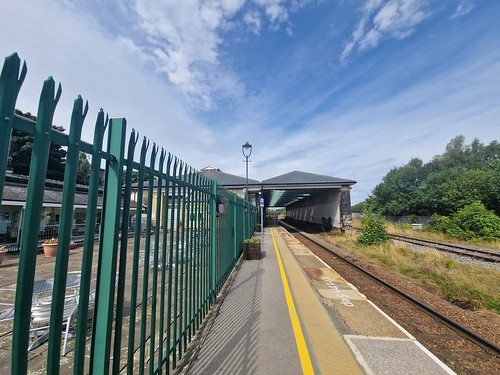 The museum section of the station is on the left, beyond the fence. 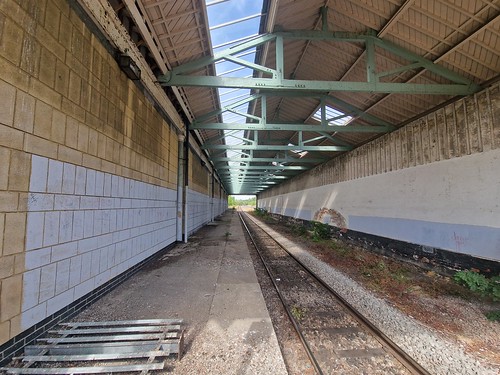 Earlier on, I mentioned the wall on the right hand side of a photo I took of the platforms. And this is what is on the other side.

As a museum, I thought this was really rather wonderful with all of its railway heritage. There’s been a little controversy that they’ve recently lost the Locomotion No. 1 steam locomotive, but I was seeing that in a new location later on during the day, so I’ll return to that then (two railway museums in one day! Well it excited me….). I’m pleased that not only has the building survived and is in use as a museum, but also that the railway still stops here, nearly 200 years on from when the S&DR first opened in 1825. I used this line later on in the day, more on which later of course, and there is something quite rousing about being on such an historic line.

The museum’s web-site is at https://www.head-of-steam.co.uk/ and I’d say (write) that a visit will likely last for around 60 to 90 minutes or so. I’m not sure what they have planned for 2025 when the S&DR is 200 years old, but I’m sure that there will be plenty of celebrations of one kind or another.