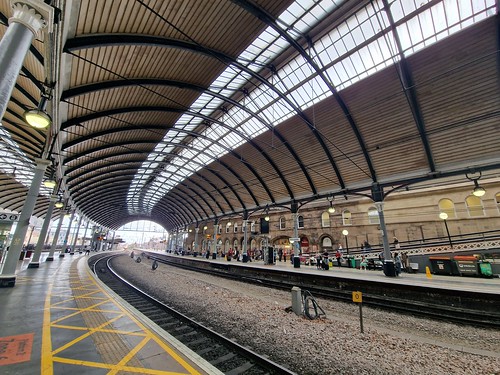 The inside of Newcastle’s Central railway station, designed by John Dobson and constructed between 1845 and 1850 on a site which was three acres in size. The sheer scale of these projects was remarkable and today there are twelve platforms for trains and two platforms for the city’s Metro service. 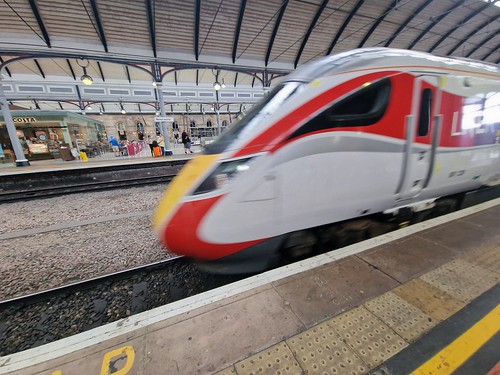 I had a little issue that when I got the station that I had a ticket for a train that didn’t exist. I walked over to the customer service desk and the LNER staff member said that the train had been scrapped from the timetable the previous week and that I could board any LNER service to Darlington. I started my question with “I’m a little confused” and she responded “not as confused as we are”, so I liked her. The service was busy, not least because it was the day before and after a rail strike, but it meant I could depart 20 minutes earlier than I had expected. That strike action must have made matters challenging for the customer service staff, but they seemed to be doing a marvellous job. 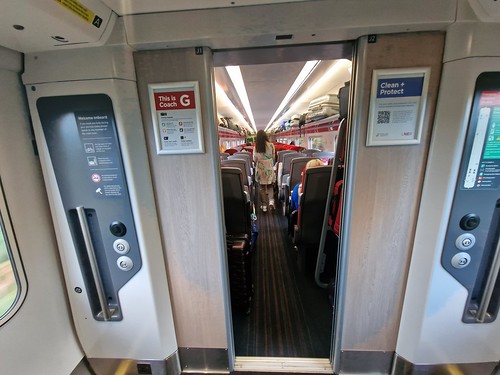 I got a seat for the relatively short journey, but as it was so busy I didn’t take a photo of inside the carriage until I was disembarking. There was an announcement when I boarded that the trolley with food and drinks would be going through the train, but then another announcement ten minutes later saying that it wasn’t as it was too busy. 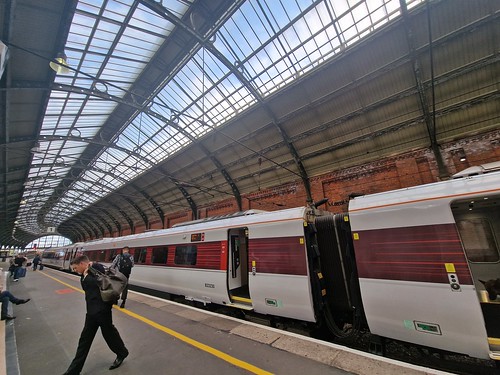 Safely in Darlington railway station which has some similarities to Newcastle, although was constructed later in 1887. There was an earlier station which had opened in 1841, but it didn’t prove large enough as passenger numbers grew. 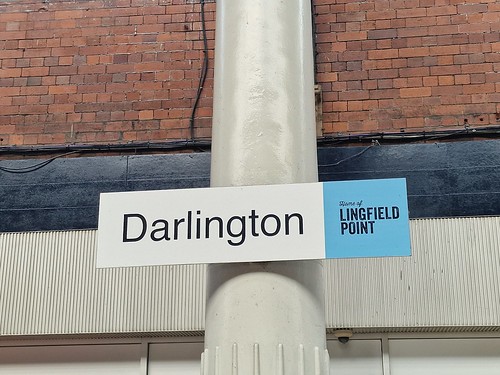 Usually these signs note the local university of similar, but in this case, Lingfield Point is a large business park which is an important part of the town’s regeneration plans. One interesting little fact (or at least I thought so) is that the town’s name got shortened over the centuries and was frequently called Darnton during the sixteenth and seventeenth centuries. It was originally known as Deathingtun, meaning the settlement belonging to Deornoth’s people. 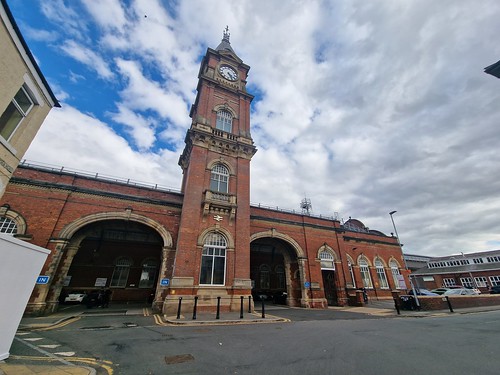 The frontage of the station which is now just the entrance to a car park area which I suspect might be repurposed in the future as it’s not a very attractive first impression. Although, looking at this news article, it seems they might be even more ambitious in their plans to modernise the station buildings. 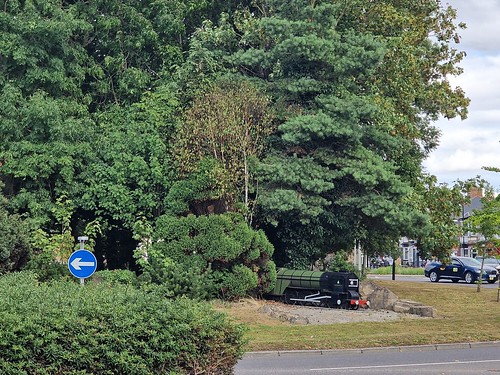 Hints about the town’s railway history are visible at one of the main roundabouts. This is a model of the steam locomotive Tornado and there’s some information about this little arrangement at https://www.darlington.gov.uk/your-council/news/news-item/?id=997. More on this railway history in future days of this riveting blog though. 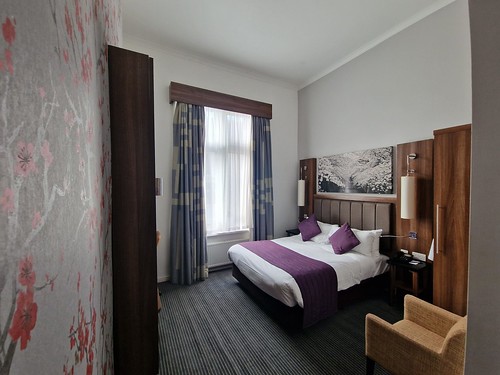 I was staying one night at the Mercure in Darlington, which I was returning to again later on during my little trip. The service was excellent, friendly and welcoming, and they kindly upgraded my room. There was a welcome drink available which I had to ask about, but that was willingly resolved. It was quite a hike to the room, it’s a large building and there are two separate sets of stairs (or lifts) to get there. 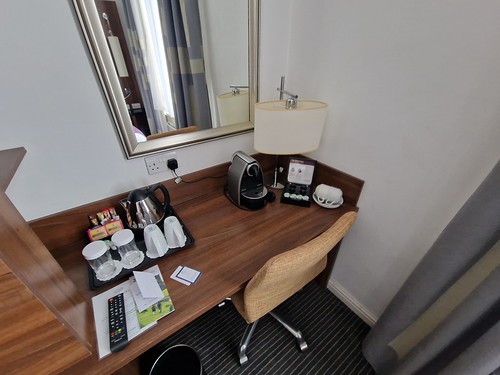 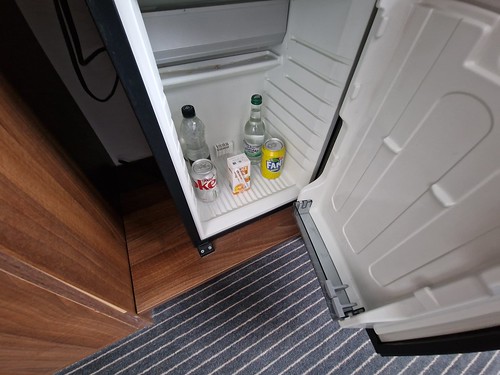 And a fridge with numerous cold drinks, all free of charge. I was very pleased with this. 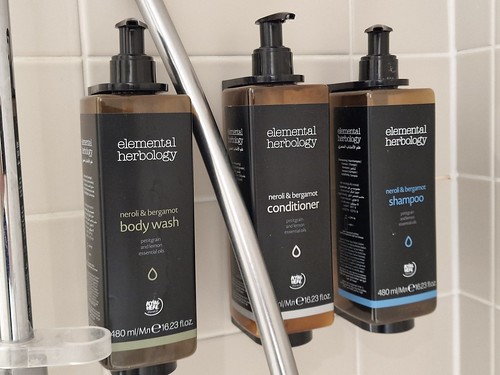 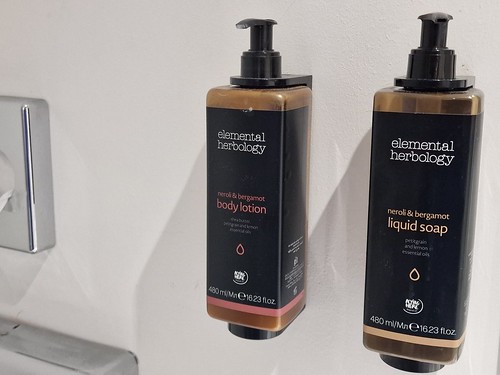 It’s fair to say that there was no shortage of liquid soap and lotion options. 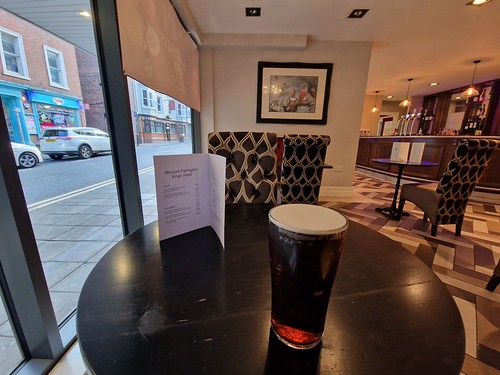 My welcome drink, a pint of John Smiths. 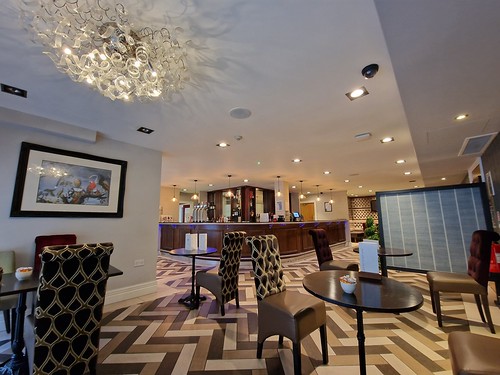 They’ve spent some money here on the hotel bar, and there’s a separate restaurant upstairs as well. The building has its origins as the Kings Head hotel and much of the original survives, although much modernised. The former grand entrance has been turned into shops, with a 1960s extension being where the reception and bar areas are. There was a large fire at the hotel only a few years ago, which led to a modernisation of the building, and everything still feels modern and contemporary. 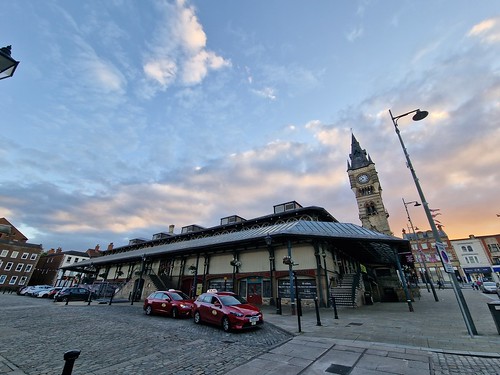 The town’s market building, but more on this in a future post. I had a little meander around the centre of Darlington for an hour or so, although it was all rather quiet.