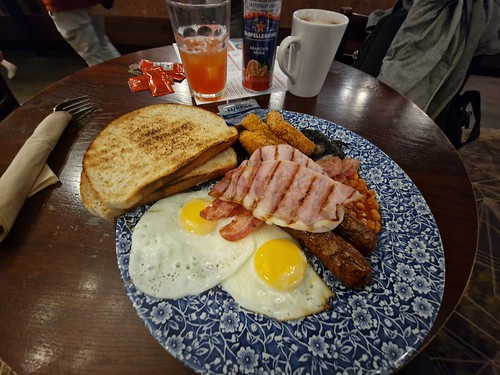 Quick breakfast at Keel Row, the JD Wetherspoon operated pub located in The Gate Cinema Complex. There were several people who tried and failed to buy alcohol before 10:00, which must be when the licence kicks in, some of whom waited patiently at the end of the bar for the time to tick over. A slightly soulless venue, but the staff seemed positive and engaged. 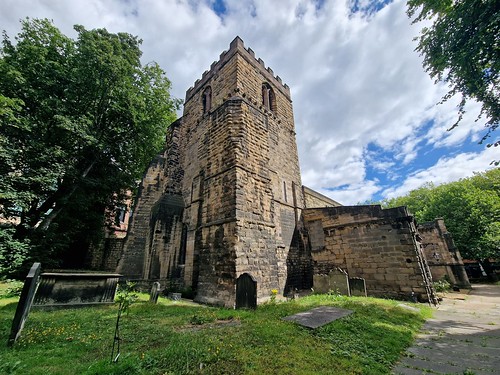 St. Andrew’s Church, mostly dating from the thirteenth and fourteenth centuries, although there are some parts of the original twelfth century building still standing. 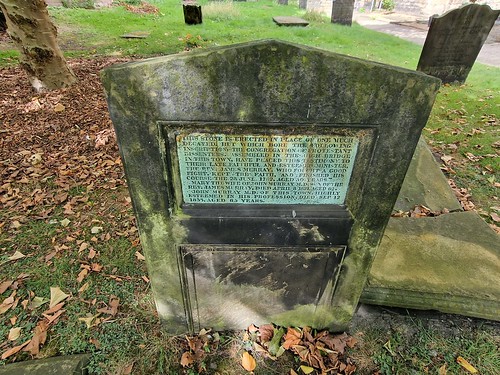 Some older graves remain around the churchyard, this is a later replacement of the stone placed here in honour of James Murray, “who fought a good fight, kept the faith, and finished his course the 28th June, 1782, aged 50 years”. 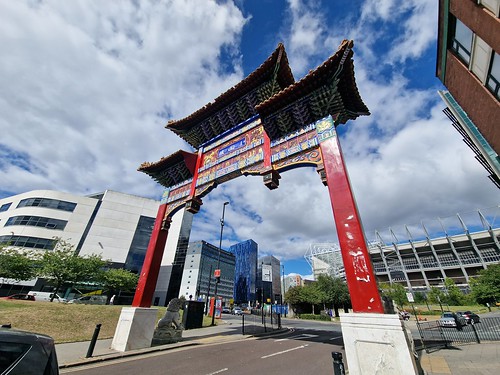 The entrance to Chinatown is marked by this rather impressive arch, designed by Shanghai craftsmen in 2004. In case anyone ever gets faced with this at a pub quiz, there are five Chinatowns in the UK, the others being in London, Birmingham, Liverpool and Manchester. 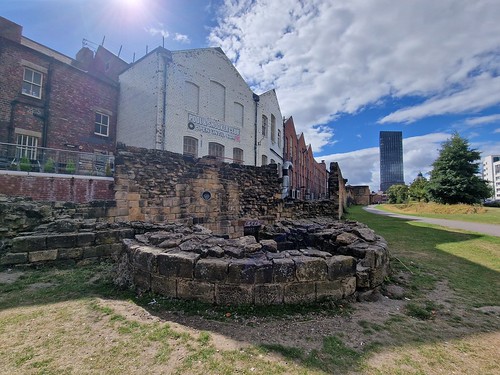 Next to the arch is a long section (the longest still standing in the city) of Newcastle’s city wall (known locally as the Town Wall), with this being the Ever Tower which was constructed in the late thirteenth century and named after the family which funded its construction. 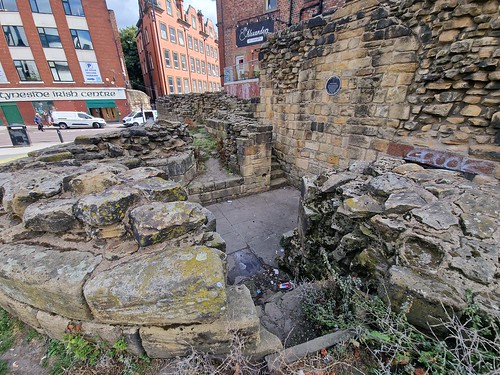 This stretch of wall was used by numerous different industries, with the structure mostly being destroyed when it was incorporated into different buildings. The Ever Tower was used by the Company of Paviors, Colliers and Carriagemen as their meeting house in the late eighteenth and early nineteenth centuries. I’m not entirely sure why a guild company of pavers, coal traders and carriage drivers joined together, but that’s a different story.

Speed’s map of Newcastle in 1610 shows where the walls were, with the Tyne at the south. 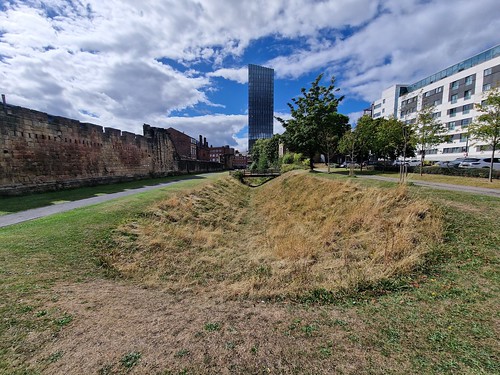 The area is now all open, but until 1933 this site was occupied by Gallowgate Lead Works. 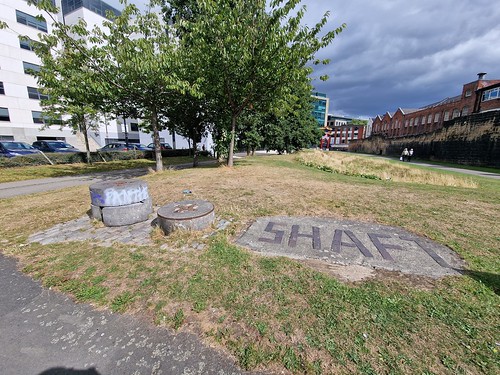 There’s a clue here that there was a shaft here….. It was the lead shot shaft, where molten lead was poured through colanders at the top and it would fall into the water 200 feet below, where it would be collected by a man who was lowered into the water. I’m not entirely sure how enjoyable that would have been as a job. 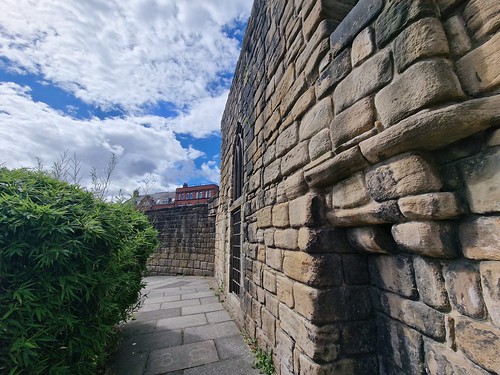 This is the West Walls section of the Town Wall, located by the Heber Tower, first constructed in the thirteenth century. This one was later leased to the Felt-makers, Curriers, and Armourers Guild, and I can see more of a connection between felt, leather and armour. 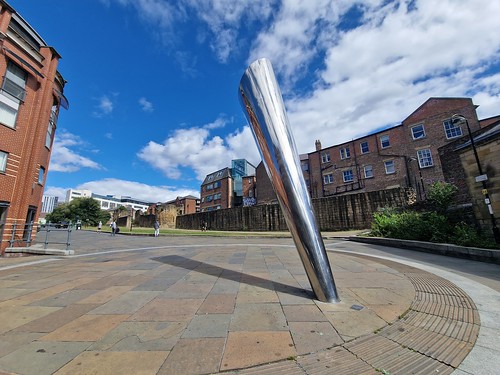 The Town Wall is in the background, behind the Everchanging sculpture designed by Eilis O’Connell (1953-) between 2003 and 2004. It takes its name from the reflection of the steel meaning the artwork is always changing and evolving. I’m not sure if it has any other meaning, there’s none mentioned on the artist’s web-site, but I noticed someone else take a photo of it, so clearly people think it has some relevance and interest. 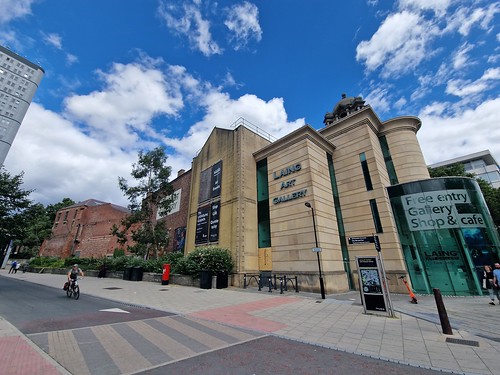 Laing Art Gallery, named after the local wine merchant Alexander Laing who gave a donation to allow the building to be constructed in 1904. There’s no admission charge and the staff member at the entrance was welcoming and gave me an introduction to the gallery and what there was to see, and there was a suitably friendly atmosphere to the whole arrangement. The odd situation with the wall in the background as it’s where the gallery was once connected to the central library. 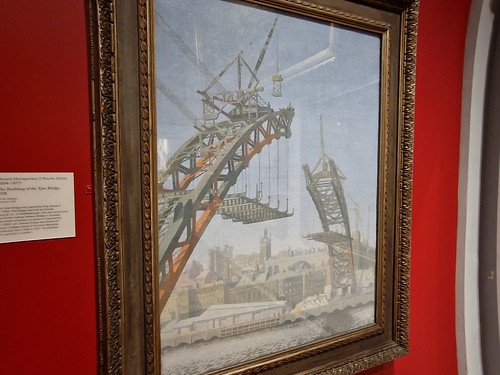 As usual, I took far too many photos of artworks and I may come back to post more images, but this was one of my favourites given its local connection. This artwork of the construction of the Tyne Bridge, which opened in 1928, was painted by the Director of King’s College School of Art, Edward Dickey (1894-1977). 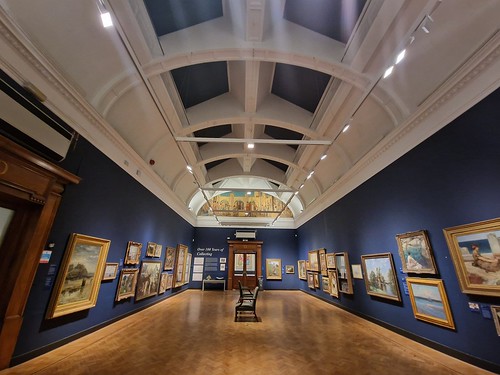 The upstairs gallery, with some more traditional artworks. Downstairs there was also the “These are Our Treasures” exhibition, which had items of great significance which belong to a range of people in the North East. I’ll try and write more about this, it’s a fascinating and very personal collection of items, placed her in collaboration with the artist Ruth Ewan. I’d certainly recommend a visit to this gallery and I was slightly disappointed to miss an exhibition of the Lindisfarne Gospels which is opening in a few weeks. 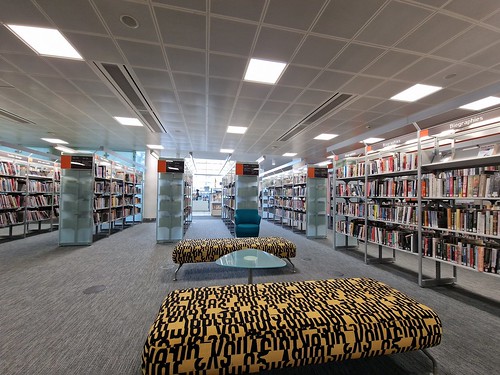 After having spent an hour in the Laing, I thought I’d cross over the road to inspect the city’s central library. There’s some interestingly designed furniture in the library and I liked that there were plenty of tables and power points dotted around the building. 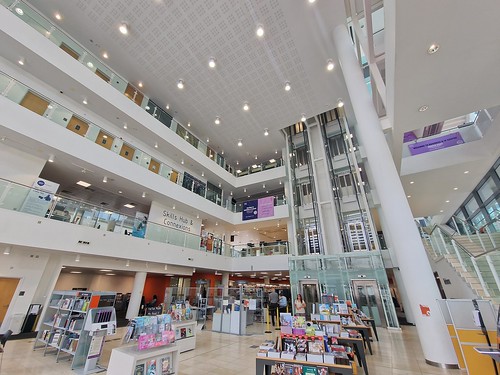 There’s a bright and open design, all very modern, but I thought entirely soulless. There seems to be a trend recently to make public buildings such as libraries resemble the entrance to a shopping centre. The beautiful Victorian library that was once on this site was constructed in 1881, but was pulled down in 1967 to be replaced by a hideous concrete building which treated pedestrians with contempt and was designed for the benefit of the car driver, not least because they built a road through the site as a pretext for it being needed in the first place. I’ll leave others to form their own opinion of T. Dan Smith, who was responsible for so much destruction of the city centre. Anyway the dreadful concrete building, designed by Basil Spence, was such a disaster that it was pulled down in 2007. 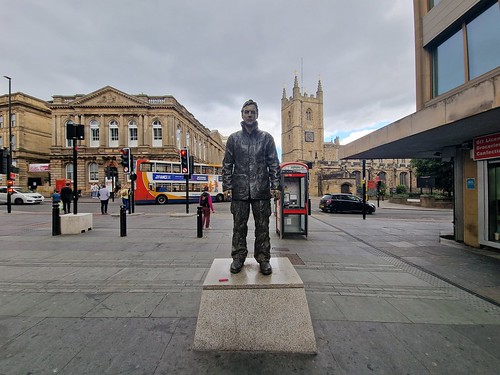 One part of the artwork by Sean Henry, who I’ve written about on numerous occasions before. I’ve seen his artworks in Holland Park in London, in Colchester, Paddington and in Woking, where he’s from. 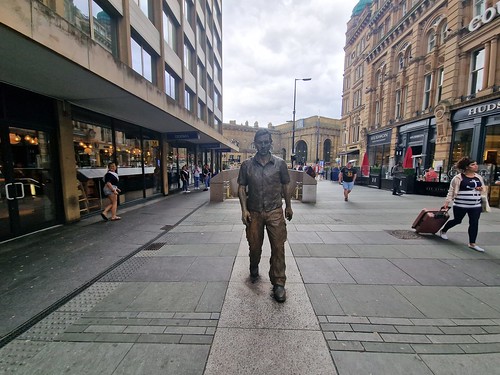 The sculpture, titled Man with Potential Selves, is in three parts, with the same man in a standing, walking and floating pose. 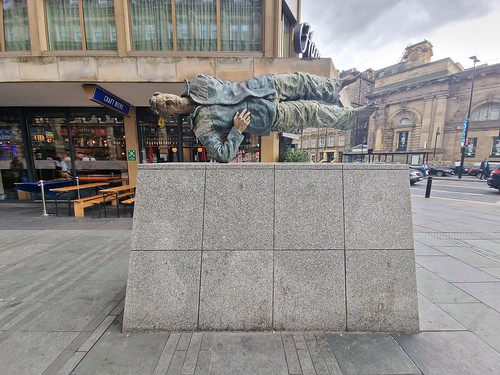 The third part, with it certainly being quite an intriguing and noticeable artwork. For anyone who wants to see it, it’s located on Grainger Street, just opposite the city’s central railway station. 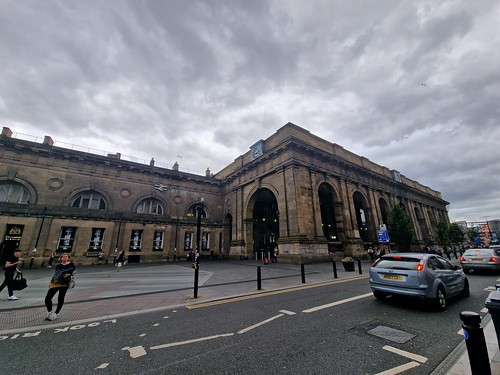 And on that point, it was time to walk to Newcastle’s central railway station to get a service to Darlington, a town which I hadn’t visited before. Thursday – Metro into Newcastle, Craft Beer and Peace at the Travelodge (Part 2)