This must be quite a scary thing to stumble across in the dark, although, I suspect Holland Park isn’t open at night which does avoid that dilemma….. It’s an artwork by Sean Henry and a text about the artist’s sculptures in this series (and he’s created numerous different versions within the theme) notes:

“His figurative sculptures are self–contained, often pensive, and preoccupied by their inner imaginings and on occasion verge on melancholic representations of our human existence.”

There was meant to be an exhibition by Henry on this month in London, although the current crisis means it has been cancelled or postponed. There’s an interesting on-line version though at https://experience.osbornesamuel.com/waiting-for-the-sun/virtual-tour/.

With regards to the above artwork in Holland Park, Henry notes:

“The Royal Borough of Kensington & Chelsea have joined forces with the Friends of Holland Park this month to purchase Sean Henry’s final cast of ‘Walking Man’ 1998 for permanent installation in the beautiful grounds of Holland Park, West London. A privately owned version of the sculpture had been on loan to the Royal Borough from 2000 until recently, and the new sculpture will stand in the same location, close to the famous Kyoto Gardens.”

I’m not sure I entirely understand it, but I like the concept and where the artist can go with it. A nice choice by the council. London – Kensington and Chelsea (Borough of) – Victoria and Albert Museum 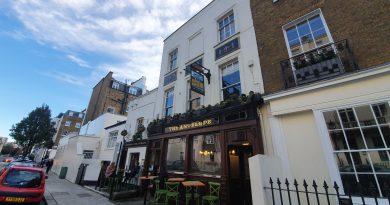