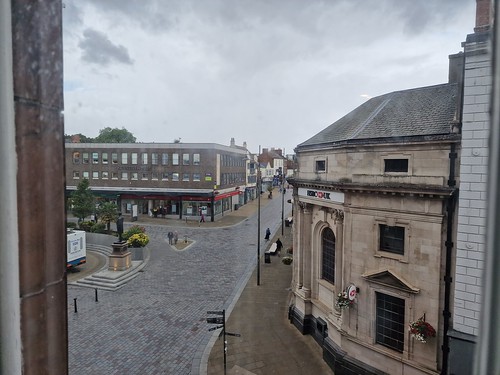 The view from my Mercure hotel room in Darlington over the town square. It looked damp and cold (outside, it was lovely inside), which was a great relief to me. It’s a bit prosaic, but I did think about previous guests from long ago who shared this view, as this hotel was once one of the grandest in the area when it was described as a “temple of luxury” when it opened in the 1890s. This wasn’t just some Travelodge of the Victorian period, it was really quite decadent. Indeed, there has been a hotel on the site, albeit a couple of metres further forwards, since the middle of the seventeenth century. As an aside, in the former building, the meetings of the Stockton and Darlington Railway Company were held in its rooms, one of the world’s earliest railways. 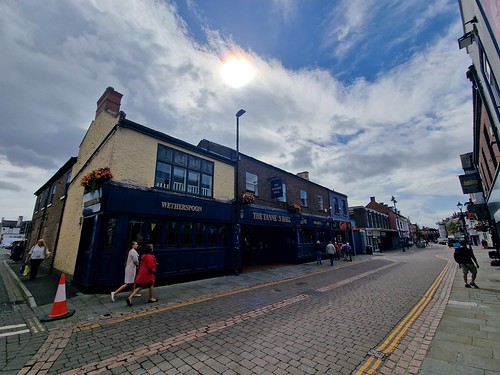 With all that history floating about in my mind, I went to drink copious amounts of coffee at one of the town’s two JD Wetherspoon outlets, the Tanner’s Hall. They themselves note:

“Skinnergate was once the location of Darlington’s Skin Market. In 1621, the local council decreed: ‘Noe tanners shall bye any skins, but upon the Skynnehill.’ The long-gone tanners are remembered by the name of this Wetherspoon pub.” 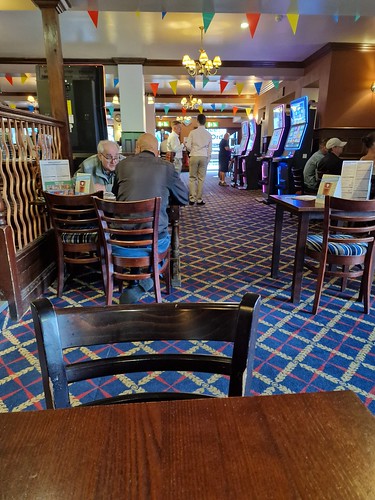 The view of the interior, a little bit dominated by AWP machines, although the volume was turned off as a compromise. It probably needs a refurbishment at some point, but it was a comfortable enough place to visit. I enjoyed my numerous cups of coffee for £1.25 and they provided electricity for my to stay fully charged. A bargain. 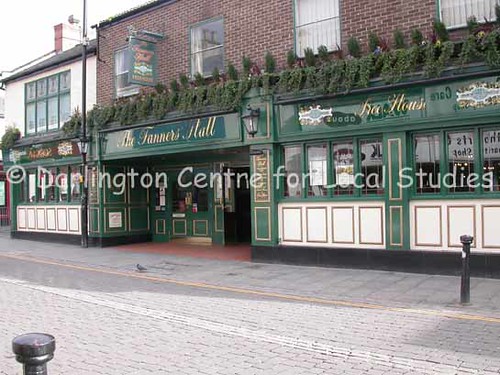 And this is what it looked like in 2005, so it has been here for a fair while. 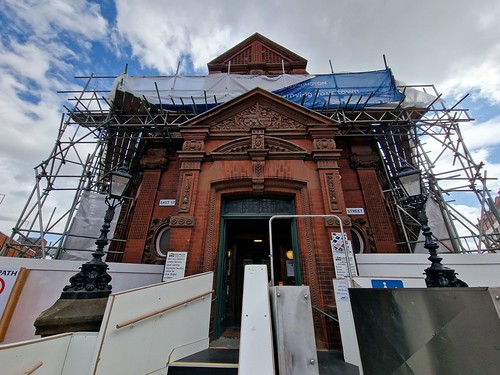 The town’s library is currently being refurbished and renovated, but they’ve kept the building open. 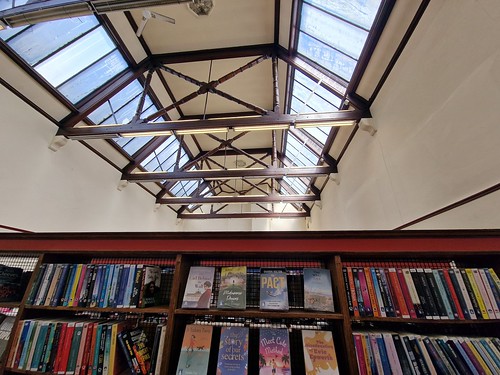 It’s light and airy inside. Although every time I think of that word I’m reminded by Basil Fawlty responding to the “is it airy?” question with “well there’s air in it”. 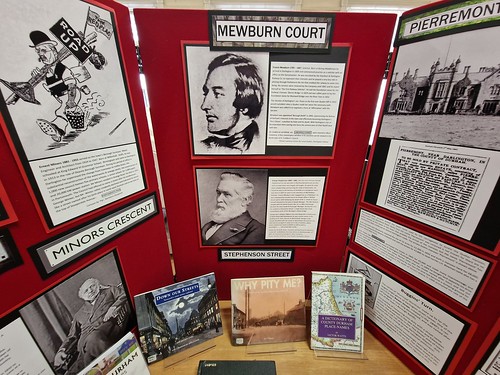 There was a little display about the history of the street names in the town. 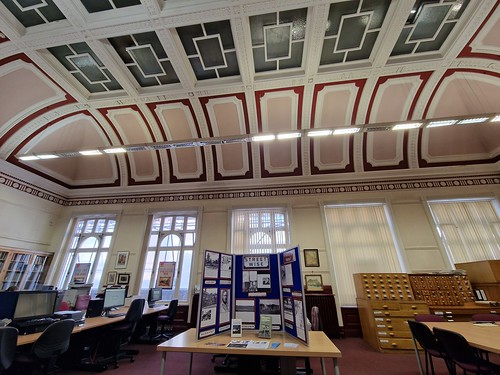 And the local history room, although the books looked a bit locked away for the most part. 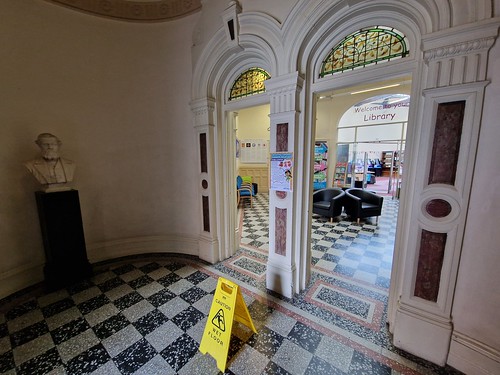 The library was opened in 1885 thanks to a donation from Edward Pease, who for a long time it was named after. This is when they built entrances to libraries to be functional, rather than to look like a shopping centre. 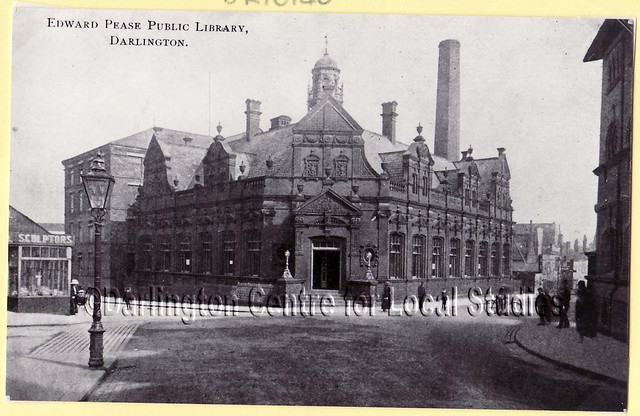 This photo is from the time that the library opened, I think it’s a beautiful building. The town should be pleased with itself that they haven’t let some idiot demolish it. 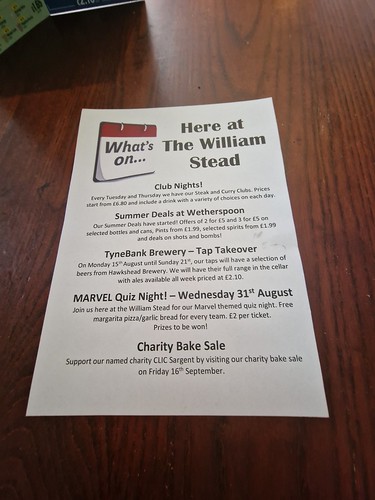 As an irrelevant aside, Wetherspoons ‘up north’ (defined by me as anything to the north of Cambridge) seem to have a lot more things going on than the ones down south. 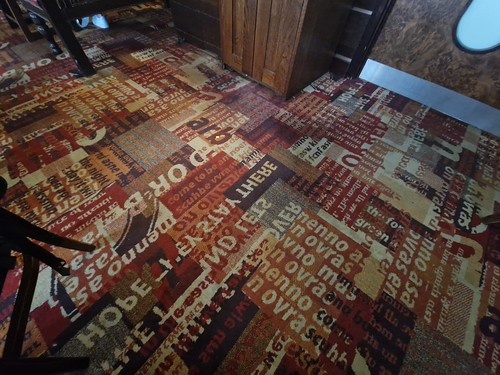 I’m not going to get distracted writing about carpets in JD Wetherspoon pubs, but this is perhaps one of the best I’ve seen. It is a nod towards the name of the pub, the William Stead. As the chain notes:

“This pub is named after a former editor of the Northern Echo who went on to become one of the most influential men of his age. William Stead submitted several articles to the Northern Echo which were so well received that, in 1871, he was offered the editor’s chair without ever having set foot inside a newspaper office. He was in charge at the Northern Echo for nine years, before moving on. His new journalism paved the way for today’s tabloid press. One of the most influential men of his age, Stead was one of those who lost their lives on board the Titanic in 1912.” 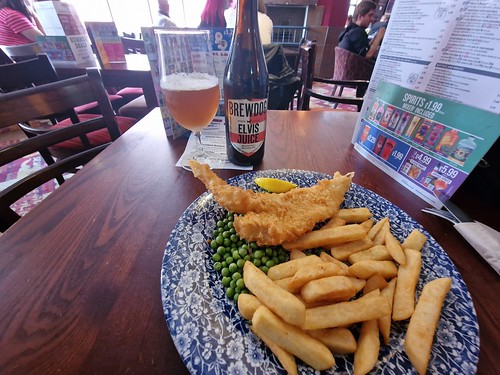 The fish was much larger than the photo looks and it met my expectations. 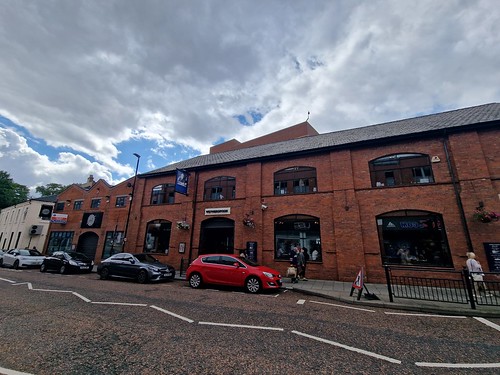 It was a nice enough pub, very busy and more modern than their sister outlet that I’d been to earlier on in the day. It’s one of the few outlets that responds to reviews on social media, and I suspect it’s against company policy since Wetherspoon withdrew from social media as I assume they couldn’t cope with the deluge of negativity. I liked this one:

“I have a DEAD vape in my pocket which doesn’t work or produce vape… as I use it as a placebo.”

The pub replied they’d had a little look at CCTV and seen him vaping. Do people carry placebo vapes around though? Is that a thing?

And a review from what I assume was a 12 year old….

Anyway, it was time to move onto some more decadent and interesting pubs in the town. 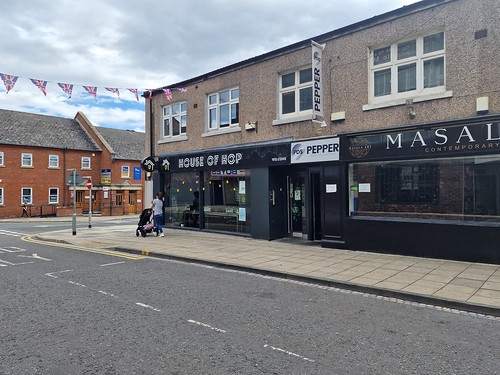 The House of Hop and this is a pub that I really liked, with a suitably on-trend and inviting feel to the arrangements. 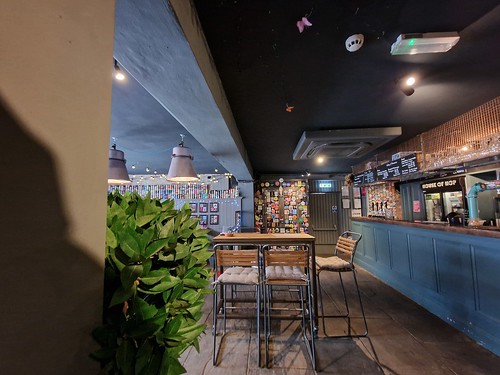 All clean and organised. I think I was the first customer of the day, the service was personable and engaging as well. All good. 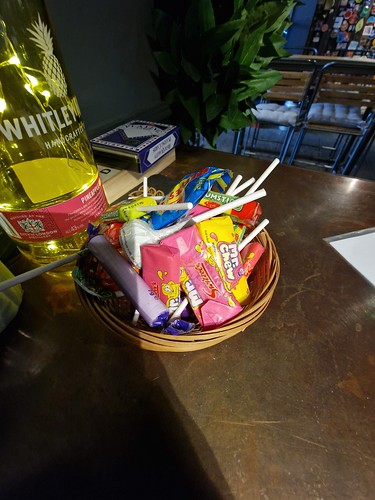 Free sweets on every table, which I’ve decided should be a requirement in every bar in the country. 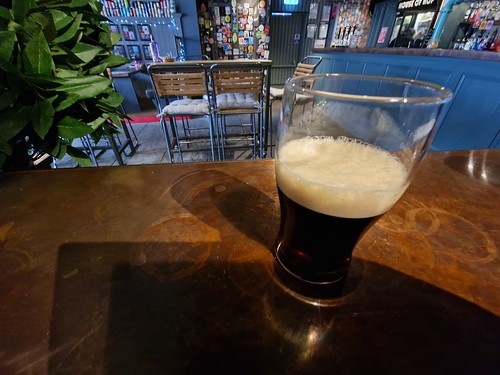 The Sticky Toffee Porter from Three Brothers Brewing and this wasn’t under-poured, it ran out during pouring and they gave it to me for free. A rich flavour, lots of toffee, I was pleased to be able to try it at least. 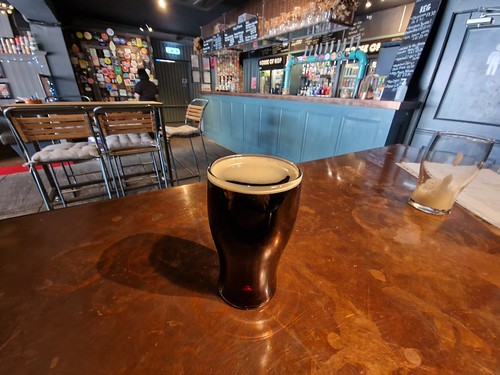 The Pape Jangles Voodoo Stout from Totally Brewed in Nottingham, a perfectly acceptable stout which I’ve had before. 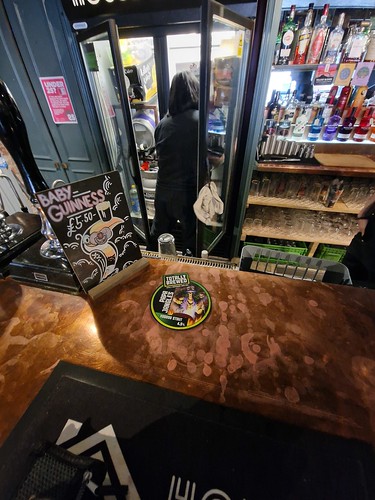 I like how the beer is stored, keeps it chilled but also accessible. 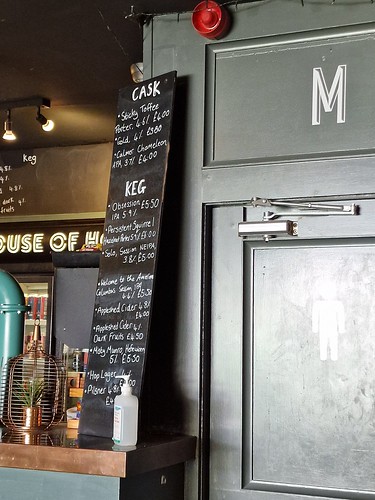 And the mixture of cask and keg options that was available. 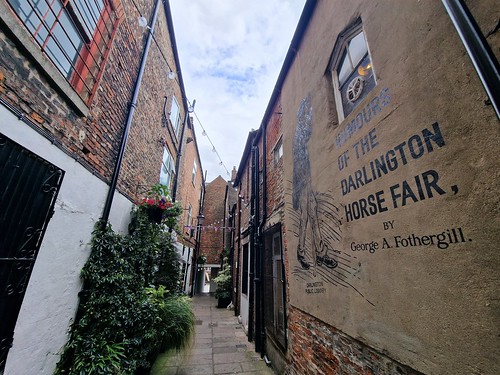 There are some lovely little alleys in the town. 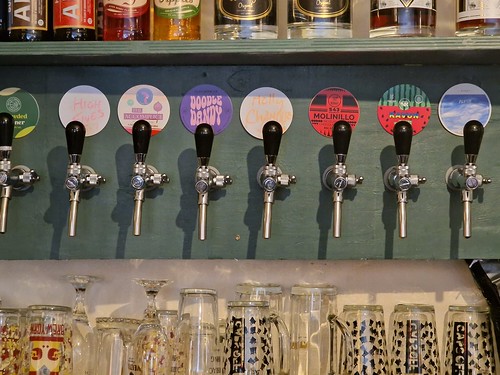 One of the alleys led to Crafty Merlin’s Coffee House & Micropub. 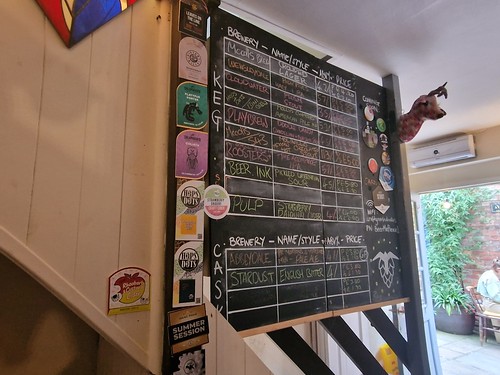 For a small bar, this is an exceptional choice. 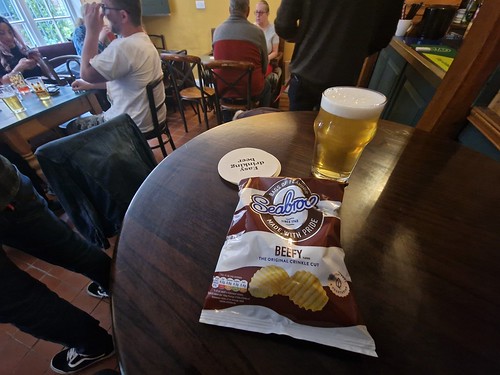 Beefy Seabrooks, what a time to be alive! I got a bit like Liam and was quite excited by the pump clip of the Dr Morton’s 4 Yorkshiremen of T’Apocalypse and although it was well-kept, it was a bit generic. 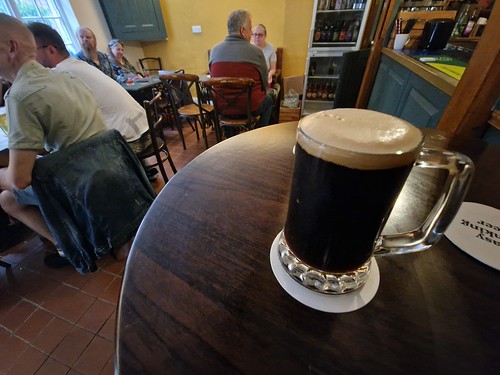 I treated myself to the Molinillo from McColl’s Brewery from County Durham, an excellent little number which has chilli to add some heat to the beer, as well as rich chocolate flavours. The barman, who I assumed was the owner, was conversational and friendly, there’s a laid-back feel to this venue and I wasn’t surprised that it was so busy. 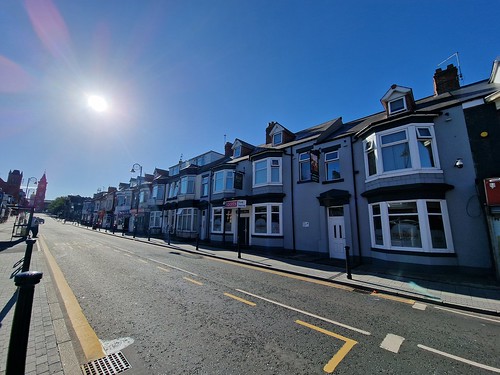 The Mercure was quite expensive on the Saturday night, so I switched to the Dalesman for my accommodation, which was very reasonably priced. I was returning to Mercure the next day, but this was perfectly pleasant. 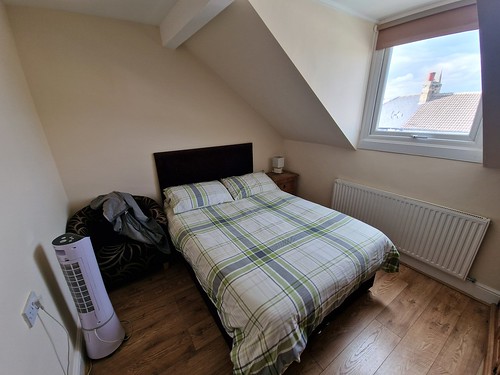 All very functional and they fixed the room door after there was a little issue with it…. I was going to go back out to visit a few more pubs, but it poured with rain and I wanted to save some of them for the next few days.