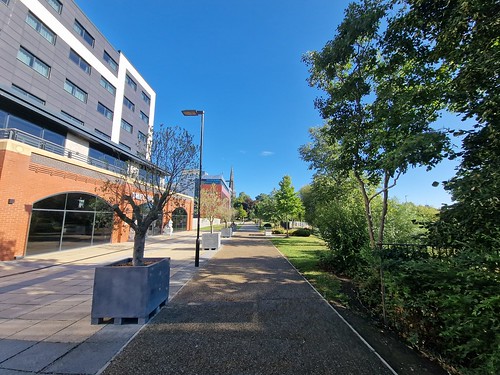 Saturday evening was wet to say the least, but it all looked a bit drier, and indeed hotter, on the Sunday morning. On the left of this photo is the TCB Darlington, or The Chinese Buffet, which closed down earlier this year. The story of the closure is a bit odd, it closed due to lockdown which is understandable, and then after a break of a few months it reopened for about three hours before being shut down due to irregularities with the electricity supply. Draw your own conclusions…. 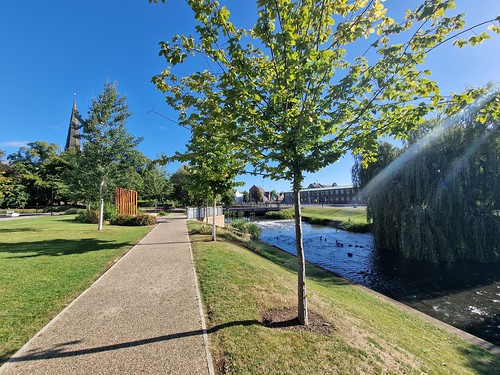 The River Skerne, which is a tributary of the River Tees, and this area is of note for an historic building which was once here. But, I only realised that later on during my visit to the town, so more about that on a different blog post. Oh, the anticipation… 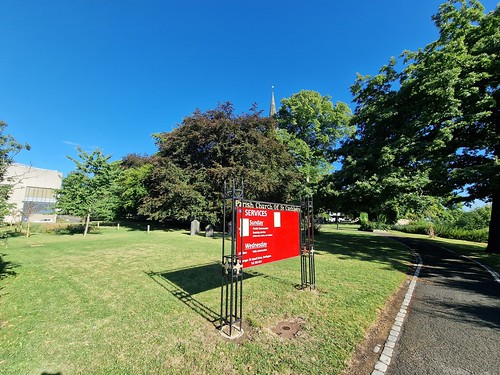 The entrance to the parish churchyard of St. Cuthbert, with rather a sparse collection of graves, so I assume many have been removed at some point. 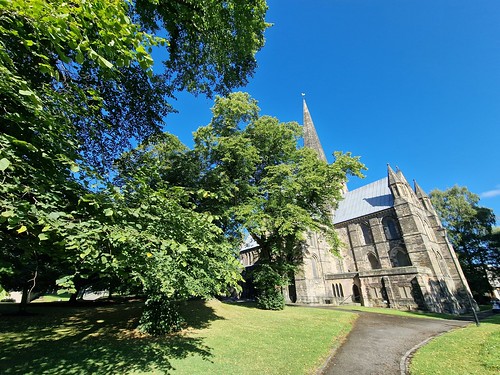 The church dates from the twelfth century, although was modernised and faffed about with during the 1860s by George Gilbert Scott. 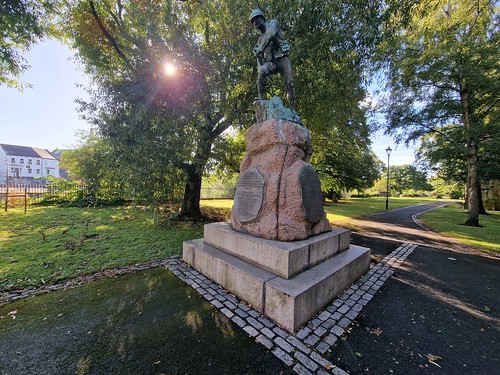 A war memorial in the church’s graveyard in memory of those who died between 1899 and 1902 during the Second Boer War. 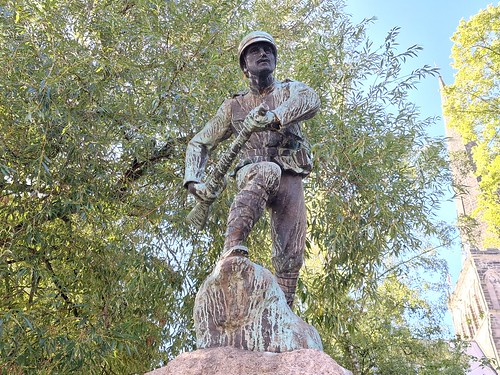 It’s a grand war memorial and it was unveiled by Field Marshal the Rt Hon Earl Roberts (1832-1914) on 5 August 1905. This would have been seen as important, as he was the man who was in charge of the entire campaign and had also been the last Commander-in-Chief of the Forces until the abolition of the role in 1904. He died during the early stages of the First World War, although he fell ill on a tour of troops and not through enemy action, and was buried in St. Paul’s Cathedral. 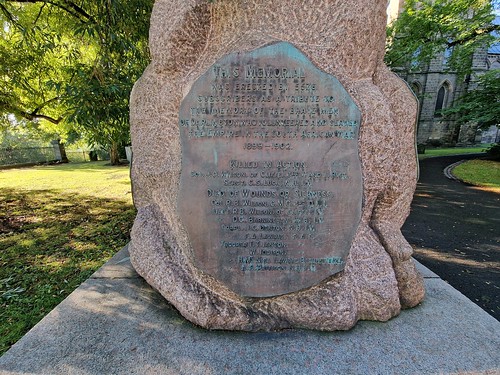 A list of the 11 men from the local area who died during the campaign. 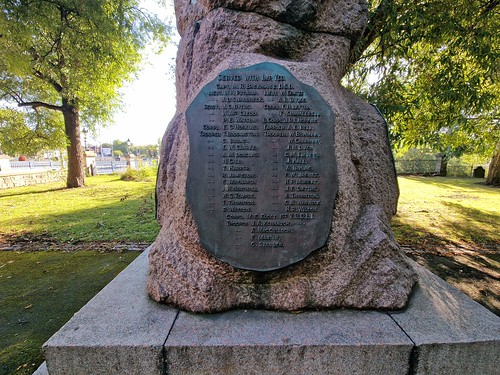 And 89 more names are on Grade II listed monument, but these were listed in honour of the men’s contribution to the campaign. Unfortunately, war memorials following the First World War could hardly list everyone who had fought, just those who had died. This memorial was funded by 5,576 different subscribers, so it’s a real public effort. 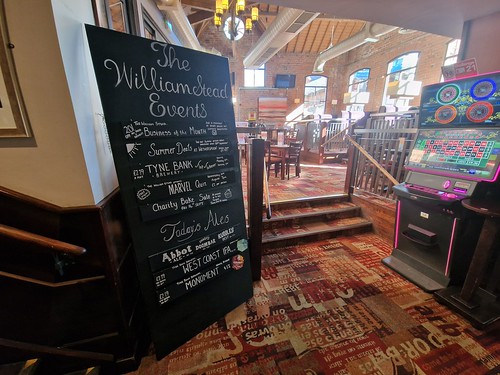 Another quick visit to the William Stead with its interesting carpet. I was rather productive here for some time, lots of coffees for just £1.25. I may have mentioned I’d constantly surprised and delighted by this bargain arrangement though. 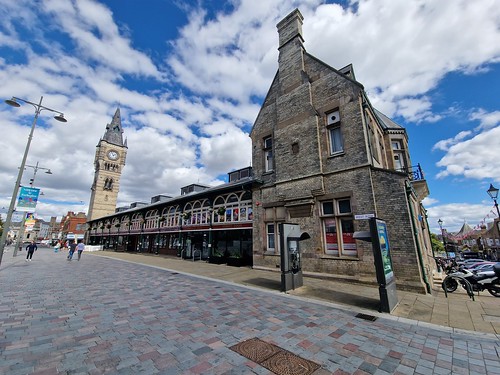 And then to Darlington’s covered market. The council are mid-way through their modernisation, and it seems from reading news articles that this has been a controversial process. The market building itself is rather beautiful and was designed by Alfred Waterhouse and constructed in 1863. 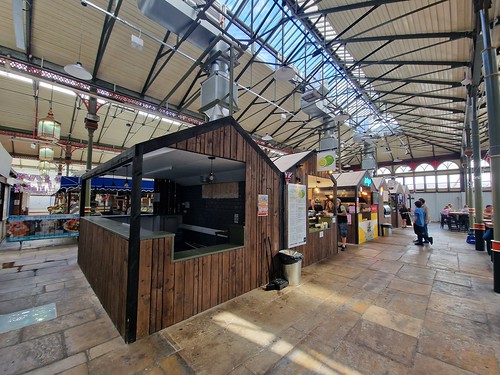 There aren’t many stalls here at all and they’re a little aggressively priced in terms of the food. I’m not suggesting that’s bad, as it’s expensive running a business, but the prices of the stalls inside the market seemed to be higher than the outlets outside of the market. That seemed an odd way round to me, this is being run as a decadent arrangement and not as a cheap alternative for locals. A chips stall here would be good, affordable and inviting, which could then sit alongside the more expensive options. 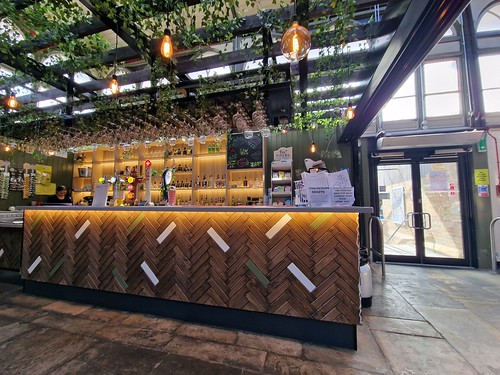 The bar at the market, which I thought (and perhaps harshly as I try not to be too judgemental) was rather formulaic and bland, but I think it’s fair to say that they’re pitching themselves at a rather younger market to myself, namely teenage girls I suspect (of a legal drinking age I’d better add). It’s a shame though, this market would have been lifted by a on-trend, modern and exciting craft beer bar which sold some interesting drinks. Given there are some operators of fantastic bars nearby, perhaps they could have been prevailed upon to operate this. 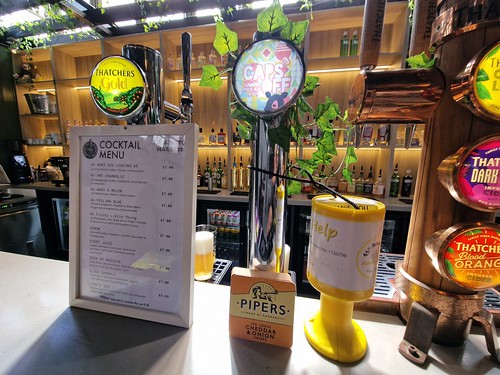 I went for the IPA from Caps Off Brewery who are from nearby Bishop Auckland. I asked for half a pint, which the staff member repeated back, but then was clearly pouring a pint. I stopped her before she served the entire pint but she then decided to get another glass and tip what she had already poured into that. That of course fobbed the beer up (which is evident from the photo), so there was a wait whilst that settled. She then tried again and proudly announced that she had given me more than a half. Unfortunately, she was reading the third of a pint line on the glass, so I politely queried that and she poured a bit more in. I have no idea what she did with the small amount of beer that was left, but it was a comedic performance at least which added positively to the visit. 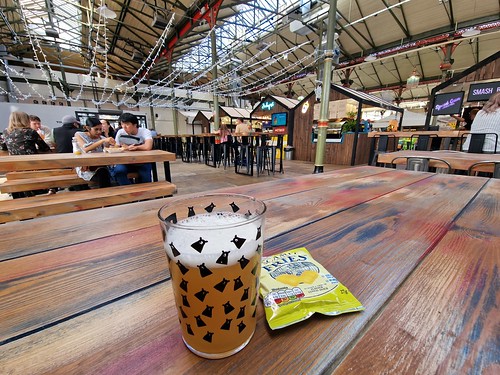 The beer was acceptable, but I wasn’t entirely confident that it was being kept at the appropriate temperature, but it wasn’t so bad as to be a problem. The scampi fries were delicious though, the bar excelled themselves there. I was surprised how few people were in the market, but it did have something of a laid-back atmosphere at least. I hope that Darlington can do something with this market when the refurbishment project is completed, these are such important elements to a town and it would be good to see it done right. Barnsley have really thought through their new market, which is on-trend, affordable and interesting. 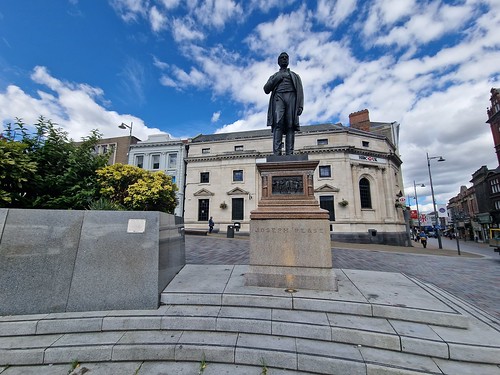 The statue of Joseph Pease (1799-1872), the railway pioneer who was born and died in the town. He was involved with the creation of the Stockton and Darlington railway company, on which more in tomorrow’s riveting blog post, as well as being the first Quaker MP. There’s also a link to Norfolk as he married Emma Gurney in 1826, the youngest daughter of the banker Joseph Gurney. 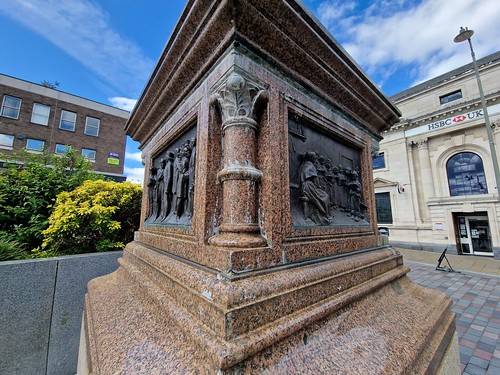 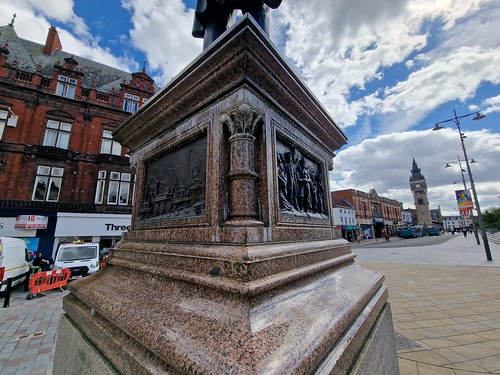 The four panels represent different elements of Pease’s life, including politics, industry, education and the emancipation of the slaves. 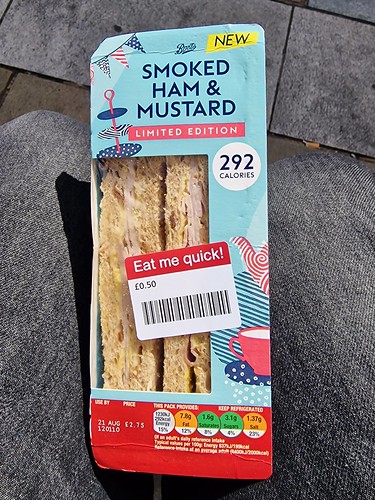 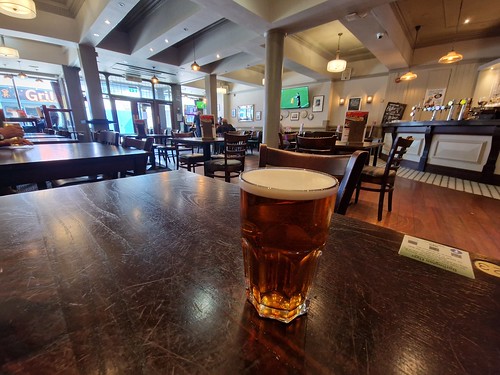 And a quick half a Bass in the Darlington Flyer, which is a Stonegate pub on Skinnergate. The prices are low, the service was polite and the surroundings were comfortable enough. Most of the customers were watching football and minding their own business, but they all seemed to be enjoying their visit. This was a Yates Bar, but Stonegate have rebranded it, which is probably for the best. The pub is opposite the Tanners Hall pub, operated by JD Wetherspoon, and this is perhaps their nearest competition in terms of a pub chain. Stonegate are going for a similar market, although they are orientated a bit more towards showing sports at this venue. All affordable and not at all pretentious, which I think is a very nice compliment. 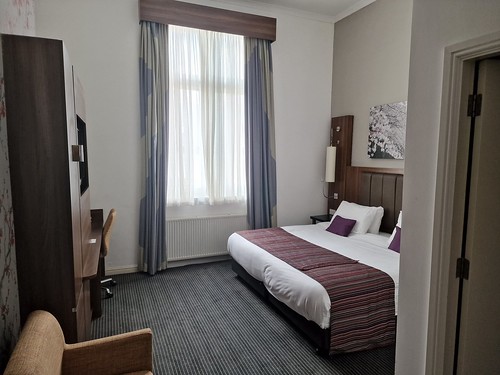 Back to the Mercure Darlington which I’d stayed at a couple of nights before, although this time I was staying for three nights. I was upgraded again to a superior room, which meant more free drinks and it was once again all peaceful. I mentioned this before, but I was impressed at this hotel, it seemed very well run. 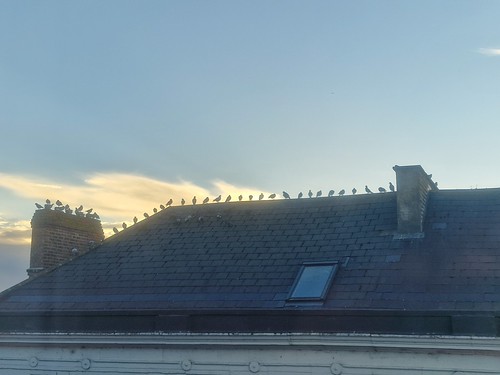 The pigeons looked content as the sun started to set.