Following on from the previous day and the Trans-Pennine LDWA 100.

I had come back to the HQ following my visit to the final few checkpoints to see the brave entrants come back in. I had seen the first couple of entrants back in before heading back out to the checkpoints, they were the runners who had finished after taking less than 24 hours to complete the course. I mean, just imagine, getting that far in less than a day, it’s all quite ridiculously fast.

But, as I’ve mentioned before, those runners did a great job, the LDWA don’t value their efforts any differently to those who take just under 48 hours to finish. Indeed, being realistic, those walkers who come in just before the end have gone for two nights without sleep, that’s even more amazing an achievement. This is why we refer to the walkers and runners as entrants, not as competitors as it’s not a competition or race. I had managed only one hour of sleep during the event, but then again, I didn’t have to walk 100 miles, so on this occasion even I needed no sympathy. 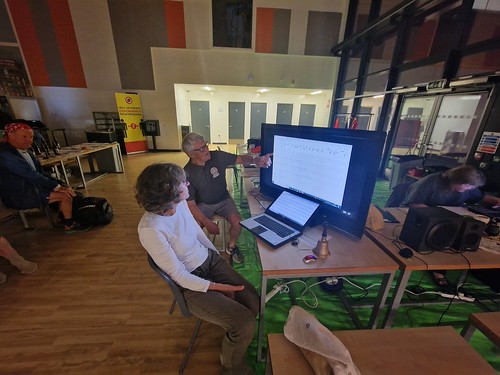 Sara, the 100s co-ordinator, looking at how the entrants were getting on, the tracking facility means that was possible in real-time for the first time on the 100s event. 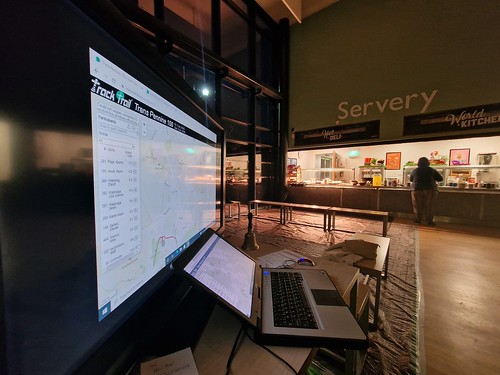 More importantly, there’s the bell, which I took command of for several hours. Every entrant who completes the 100 miles is welcomed by the bell ringing, to ensure everything knows just how brave they’ve been. I wouldn’t need this, I’d go and tell everyone in person just how brave I’d been, but that’s a different matter. Completing the event is a big thing and a bell ringing and applause is the least that we can do to acknowledge the efforts that the entrant has made. 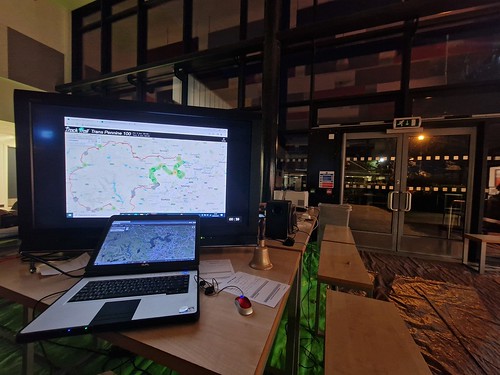 My view for several hours. 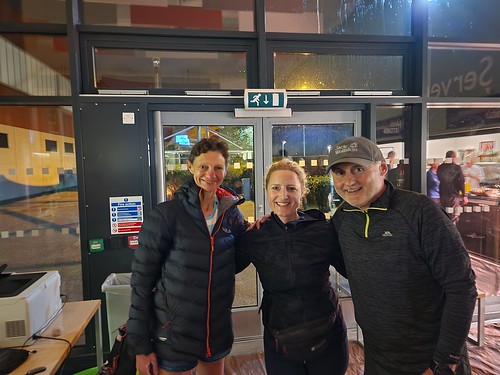 I was delighted to see that Claire and Simon had got back in, still looking in great shape. I analysed Simon’s GPX file to see if he had cheated, but despite checking for over twenty minutes, I had to admit he had indeed walked the official route without deviation. He did very well. Simon and Claire seemed to enjoy their walking round, although a few came to an end and swore they’d never enter again as they remembered how far 100 miles was. However, some had changed their mind within minutes, it’s a tough challenge, but that’s why it’s so addictive to many. 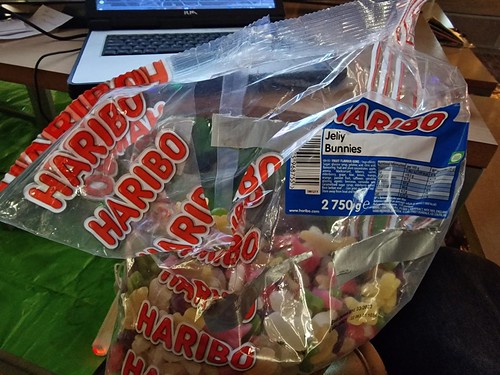 Aaron opened this 2.75kg bag of jelly babies, which I selflessly helped him eat to pass the time over the next few hours. 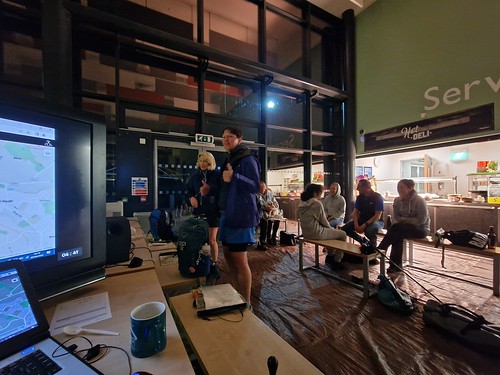 Karen (on left) effortlessly sweeping in. 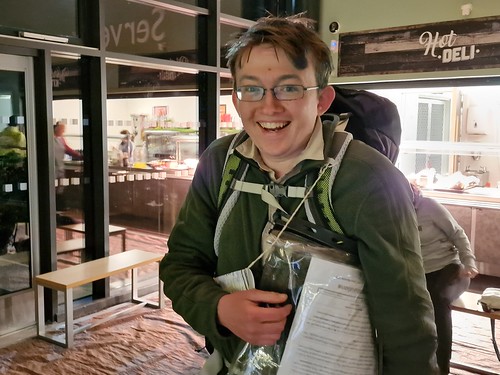 Sammy Dawkins, one of the youngest finishers, who was another one who didn’t look any different to when he started, just a natural walking athlete. 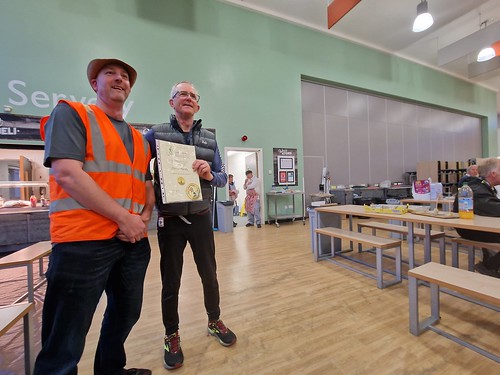 There were numerous presentations throughout the event, this one presented by Aaron to David Purdy, who had completed his 20th LDWA 100. They get a special badge marking this milestone, along with a certificate signed by Sara and Julie, the national chair. 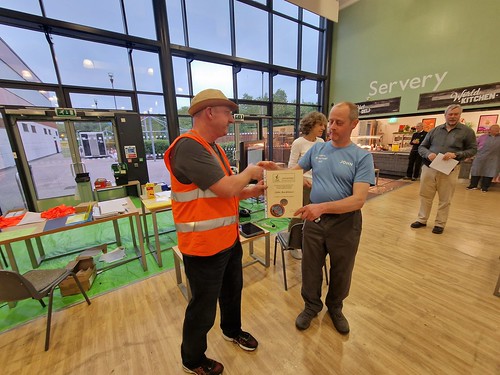 John Backhouse, who had completed ten LDWA 100s. Oh, and Richard to the right, who is thinking about entering an LDWA 10 one day. 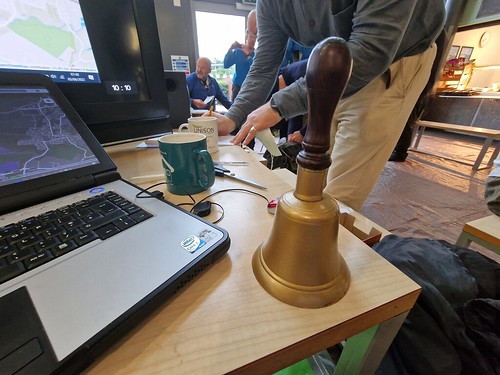 The very lovely bell! Bacon rolls also made an appearance at this point, I was very pleased at that. One thing that isn’t evident until being at this event is just how emotional it can be, seeing friends complete such a touch challenge of course, but also just the delight of seeing anyone finish having walked for nearly two days non-stop. I marshalled my first 100 in Kent, and it was only then that I realised how high emotions were, all in a happy sense of the word. 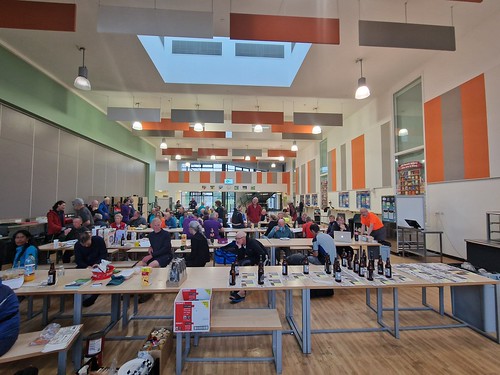 It was starting to get a little busier in the hall as entrants started to wait for the arrival of friends, as well as those coming in towards the maximum time of 48 hours. Giving them that special welcome. 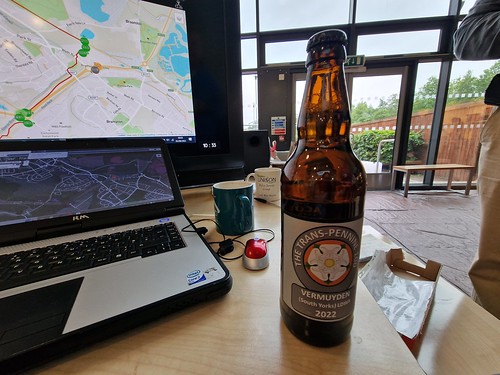 The beer that successful entrants received and what a marvellous idea. 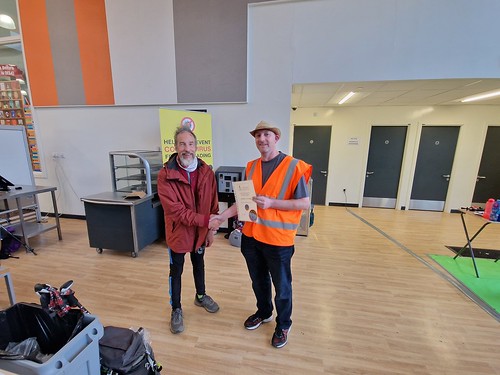 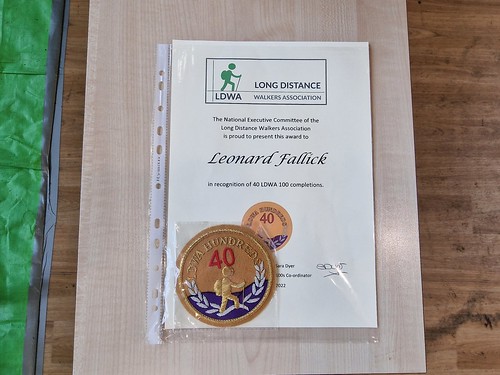 And then this certificate was ready to be awarded to Leonard Fallick, who has achieved the astounding milestone of having completed 40 LDWA 100s. He hasn’t entered all of them in a row as he couldn’t make a few of them, but he’s finished every single one of those which he’s started, which is some considerable going. Some 100s are more challenging than others, some because of the terrain, but some mostly because of poor weather. But yet Leonard has battled on and finished every one of his 40 events, a remarkable achievement. 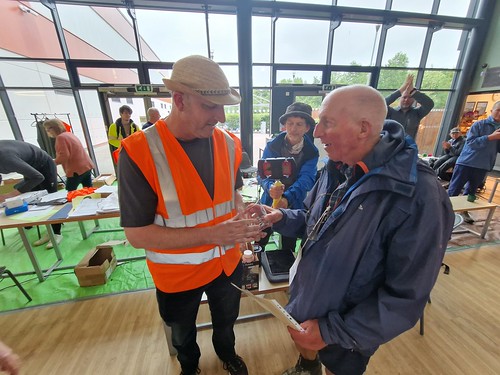 And here’s this hero of the LDWA, well done Len! 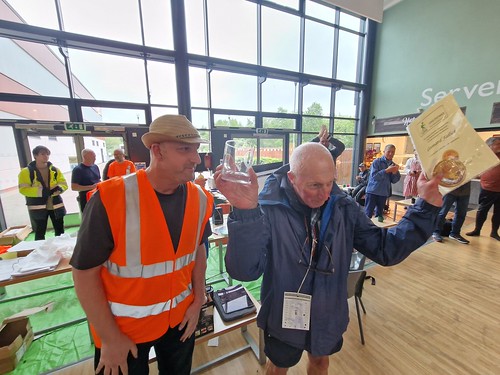 As an additional reward, Len was also presented with an engraved glass so that he can sit at home drinking decadent craft beer (or whatever drink he prefers) whilst looking forwards to future events and reminiscing over previous achievements. 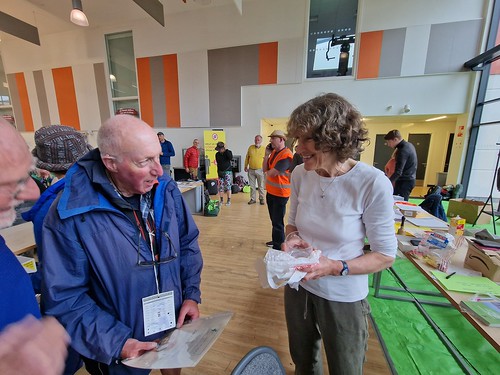 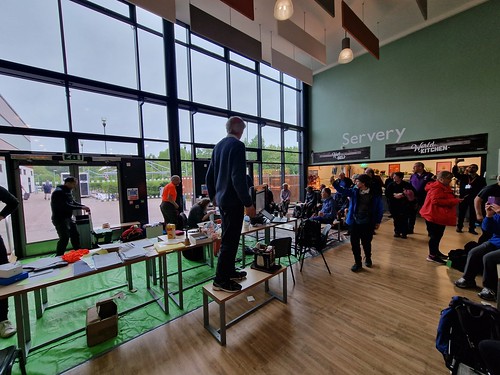 Ken, our Vice President, calling over Aaron to thank him for all of his hard work as the event organiser. As Aaron noted, it was of course a team effort and we couldn’t have had such an event without the many hours of organising, walking, writing routes, changing routes and booking halls, a process which takes years for events such as this.

And that was the close of the event, another really lovely weekend which has been a real challenge for the organising committee given that their event was pushed back a year, then the dates were changed with the shift of the Bank Holiday days being moved. Nonetheless, they kept rebooking halls and kept changing plans, and I know from the feedback received just how much the entrants enjoyed it. OK, there’s a lot of walking, but there is the marvellous sense of the LDWA community wanting to be involved in this event, whether taking part or marshalling. All really rather lovely, and Simon Pipe has an album of photos from behind the scenes at HQ.

Oh, and did this make me want to do another 100? Well, it did just a little bit. But when the event came to a close, it was time for me to move to a hotel, get an early check-in and then have a long sleep.