I stayed at this hotel near to London City airport following my flight back with British Airways from Florence. For a time it looked like my flight would be cancelled, or at best, it would have arrived too late to land at London City and so would have been diverted to Southend Airport. I sent the hotel an e-mail asking if I could check-in late and they responded quickly saying that they’d do the check-in there and then on-line, so I could just pick up my keycard which they had put under the desk for the night porter. All very professional.

I got there in good time in the end, thanks to British Airways, and the receptionist was the friendly and helpful staff member who had sent the e-mail to me. This is a relatively cheap hotel, but the welcome seemed authentic and I was pleased with the bargain price of £33 including breakfast. It’s only an eleven-minute walk from London City Airport, so convenient for these late arriving flights. The room was clean and to brand standard, perfectly sufficient for a one-night stay. I went down to breakfast and I was the only one there, so at least it was peaceful. There were cereals, pastries, yoghurts and a selection of meats. This was sufficient before my train journey back to Norwich, with the orange juice and coffee being helpful as well, particularly the coffee for that little energy burst. When I checked-out at around 09:00 the breakfast area had around thirty people in, so it was either a coach party or perhaps a flight load of passengers who were on one of the cancelled flights from the previous day from London City airport. I imagine that the breakfast experience for them wasn’t quite as relaxed as mine was.

Anyway, I thought I’d have a little look at TripAdvisor to see what people thought about this 81-room hotel and the reviews are quite reasonable. I mentioned above that I walked this in eleven minutes, but some reviews complained it was a long walk, people managed to take 15, 20 and 35 minutes. I don’t know what the one taking 35 minutes was doing.

One person didn’t like their toilet and must have been told to use the one on the ground floor, which isn’t ideal, although certainly isn’t illegal. I don’t like the comparison with easyHotel, which is one of the few hotel chains that I hold in entire contempt. Which might be unfair since I’ve never stayed with them….

“Im sure prisoner’s get better service better breakfast. Rooms more then basic think easyhotel – class customer service. First room toilet didnt work fully booked normaly by law a hotel would have to reacomerdate u somewhere else at there cost. Not here so no toilet facility apart from going down three floors in lift.”

Another guest was pleased:

“One member of staff in particular was aggressive and combative”.

I never manage to find aggressive staff in hotels (well, bar that one in Los Angeles a few years ago, which I must write about at some point), but it’d certainly liven the check-in experience up.

“In my 36 years alive on this earth, this hotel has to be in the top 3 worst stays ever, in fact i would have rather have slept in my car and woke up and jumped in the Thames had i known it was that bad.”

Hmmm, sounds like they didn’t find this their perfect stay….

Another guest complained that the place was “full of builders” and there are lots of problems with noise, which I can imagine must be a problem at weekends. Having lived near to this hotel a few years ago, the area isn’t the most salubrious, but I thought that the staff did well to manage everything. To be honest, I was just pleased to be able to get back to London before the curfew at City Airport and get to the hotel. 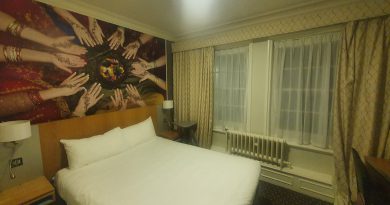