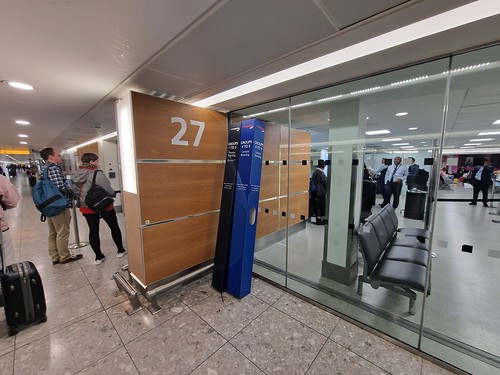 Suitably refreshed after visits to the Qantas and Cathay Pacific lounges, it was time to board the American Airlines flight from Heathrow T3 to JFK T8. See, I did tell readers that this trip would eventually get to the US! There was strict adherence to boarding by groups, despite the best efforts of some passengers to try and get on earlier than the group number on their ticket. The staff member said “group 3 now and anyone from groups 1 and 2 yet to board” and a passenger said to her “does that include group 8?” to which she replied that no it didn’t. Boarding was sluggish though, the flight departed 45 minutes late given the slow boarding and stowing of bags. 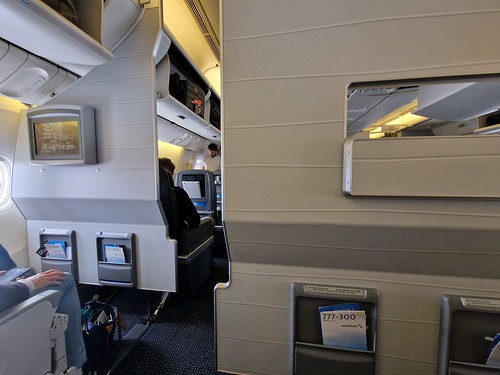 I had a bulkhead seat which gave me plenty of space and legroom. The aircraft was a Boeing 777-300, registration N722AN, which has been operated by American Airlines since they acquired it new in 2013. I was happy with this seat which I had been able to book for free before the flight, it felt comfortable on what was an entirely full flight. Apparently there was just one empty seat on the flight and that was someone at the airport who had cleared security but gone missing. I could hear the crew member say that he was likely asleep in a lounge and that it was too late to get anyone on stand-by onto the aircraft to replace him. With American Airlines, you can see how many people are on stand-by for each class and they got nearly everyone on board. 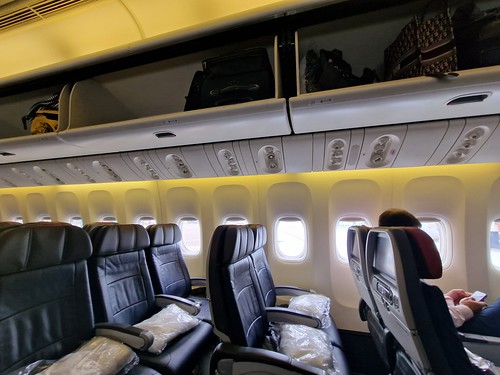 Legroom on the other seats looked manageable, but not entirely comfortable, especially if someone reclined into that space. I didn’t have to worry about that issue fortunately and I think the person behind with child was likely relieved that I didn’t recline either. 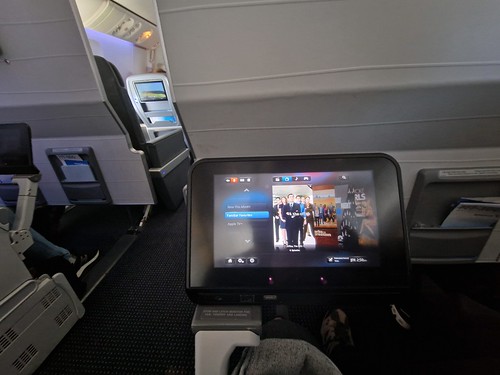 I didn’t use the in-flight entertainment as not much seemed particularly interesting, despite their claims of hundreds of hours of content with something for every taste. I did though watch an episode of the US version of The Office before getting bored and reverting back to podcasts. 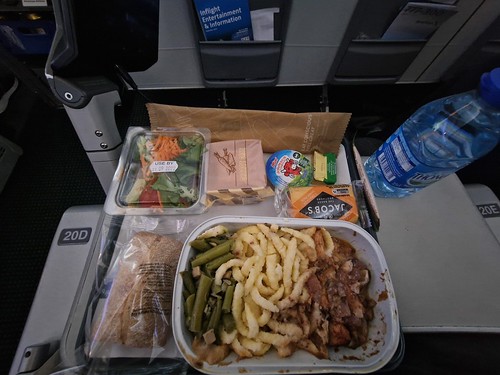 The main meal service, I went for the chicken, green beans and starch option, although I was puzzled as to what that starch was. There was also a salad with dressing, a roll, crackers with cheese and then a carrot cake. I thought it was entirely satisfactory, nothing exceptional and the starch didn’t sound overly appetising, but it all tasted OK and it kept me amused for fifteen minutes or so. 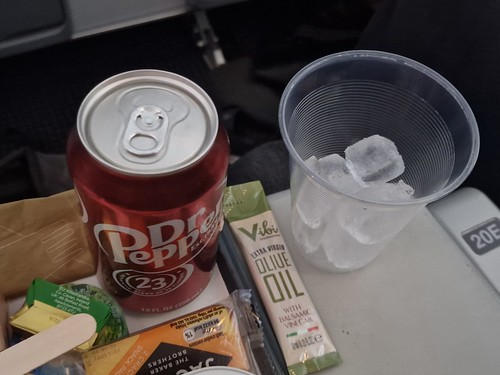 I went for American Airlines over British Airways as they offer Dr. Pepper and have air vents. Simple things and simple minds…. 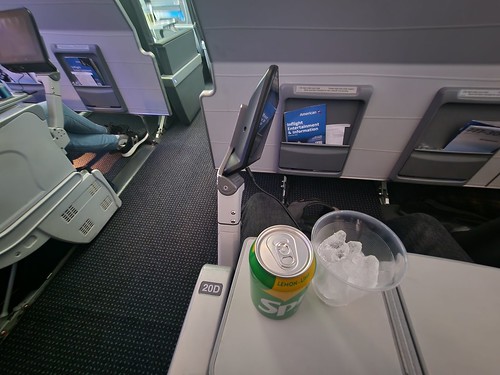 In between naps, I went for Sprite as I managed to run them out of Dr. Pepper. I had quite a lot of little naps during my flight. Fortunately, there were power points on board so I had everything fully charged, and still had chance to lend the charger to my neighbour (on the plane, not in Norwich) as they couldn’t get theirs to work. 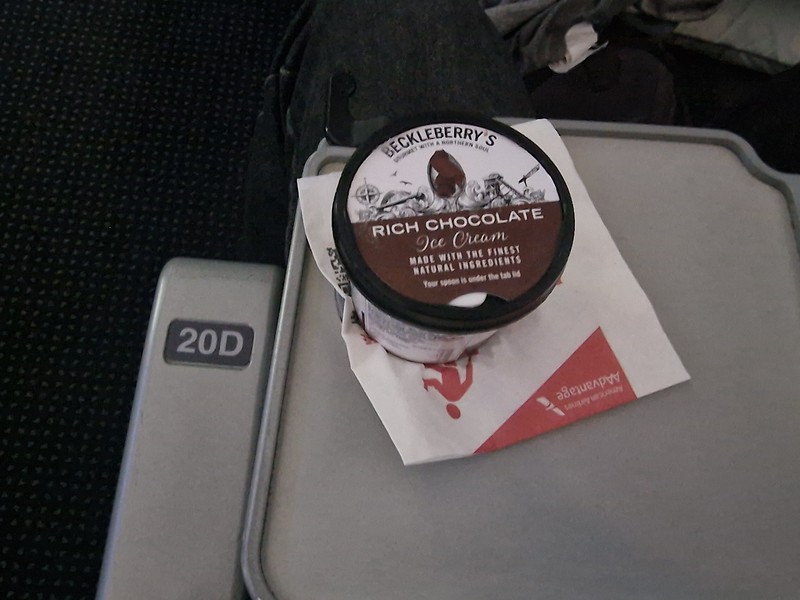 The personable crew member came to offer everyone an ice cream, mentioning to give it twenty minutes as it was so hard. He took a long time getting through the cabin as he kept talking to passengers, I got the impression that he rather liked his job, or he certainly looked like he did judging by his interactions. Indeed, all of the American Airlines crew were friendly, informal and they seemed to work well as a team, it give a positive ambience to the arrangements. 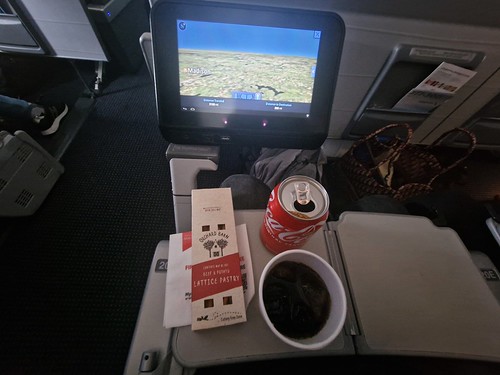 The breakfast options were beef or vegetarian pockets. Everyone else seemed to be going for the vegetarian one, but I was brave and went for beef and the crew member commented on my bravery. Not the most encouraging thing to say after ordering a meal, but the food was fine, although it was mostly pocket and not much beef.

A little girl came to talk to me as she wanted to look at my phone and see photos of my children. After checking her parents were content with this plan, which they were as they were trying to deal with a crying young baby, I checked she would be satisfied just with photos of a friend’s children. She was and we then went through hundreds of photos of Liam’s children who she decided that she liked. She thought Liam’s girl was her favourite as she looked the naughtiest. 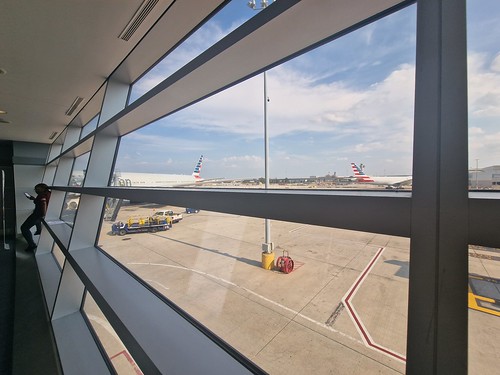 The problem with airbridges is that it makes it hard to take photos, as opposed to when passengers are allowed to walk down steps. Anyway, the aircraft is in the photo to the left and that’ll have to do. There were a ridiculous 45 minute wait on the ground to get a stand, before another ninety minute wait at border control. They didn’t try any interrogation on this occasion, the officer just checked if I was in the US for tourism or business. I remember when a border control agent asked me a few years ago if I believed in the JFK rumours that he was killed by the secret service, which is quite a tricky question to know how to answer when arriving tired into a new country.

Anyway, the flight had made good time and there were no delays to the services I had taken during the time because of the Queen’s funeral which was potentially going to impact operations at Heathrow. It had been a good day. 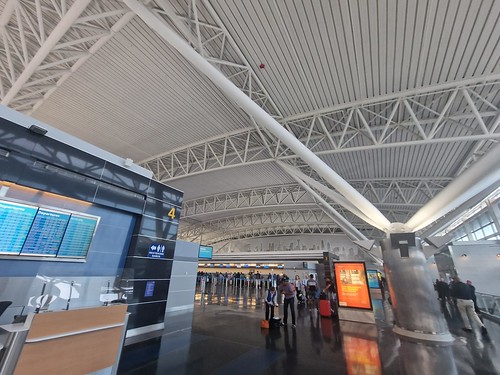 This is terminal 8 where American Airlines and British Airways are combining operations, after many years for BA at Terminal 7. There’s a fair chunk of construction work going on at the moment and there’s going to be one large Oneworld lounge, albeit separated into three sections depending on class (of the flight, not of the individual) and loyalty scheme status. This model is likely to become more common I suspect, it feels odd that there are four Oneworld lounges at Heathrow T3, much as I like that situation.