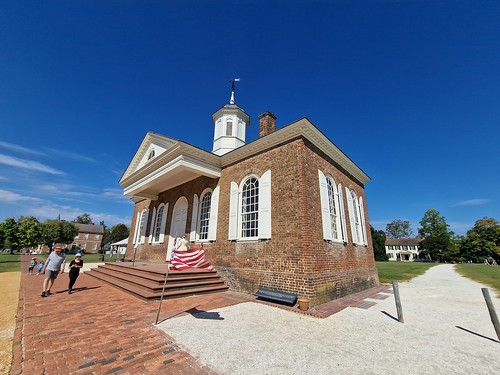 The courthouse in Williamsburg was constructed, although the designer is unknown, between 1770 and 1771, originally holding two separate courts, the James City County Court for hearing cases in the wider region and the Hustings Court for matters which happened in Williamsburg itself. The building is located in the middle of old Williamsburg, a deliberate decision to note that it was at the centre of the community.

Benjamin Waller read aloud the Declaration of Independence at this courthouse on 25 July 1776, just a few weeks after it was declared in Philadelphia, so I can imagine there was some gossip which continued on at the Charlton’s coffeehouse about that little arrangement. Following the Battle of Williamsburg in 1862, which was part of the American Civil War, the building was used as a hospital for Confederate troops, which is also when all the wood from the doors and windows mysteriously went missing.

The building is mostly original, but the original furnishings were stripped out in the nineteenth century (some recent replicas have been installed instead) and a fire damaged the entire structure in 1911. What was left of the building was taken over as part of the Colonial Williamsburg project in 1928 and the columns added to the frontage in 1911 (it’s not clear whether the designer ever wanted them, although it looks like they might have done) were removed. For those who had argued for decades about the columns, they would have been most disappointed that they lasted for just 17 years. 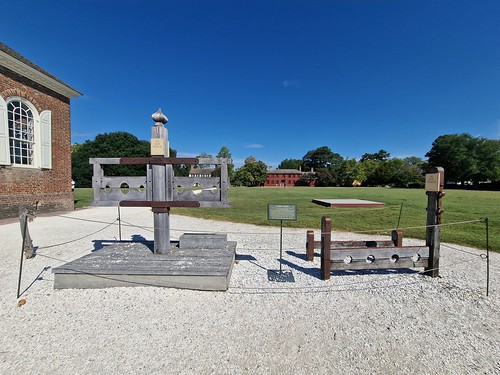 And some of the punishment devices on display next to the courthouse.