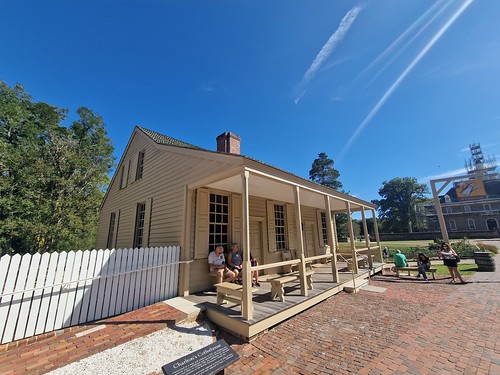 This building is new and is one of the few recent additions to Colonial Williamsburg, which was mostly laid out in the 1930s. Given that it’s a recent construction, it’s allowed historians to have more knowledge and resources into ensuring its historical accuracy, so although it’s not an original building there is still an authenticity to it. The original structure was built as a store and private residence in 1750, before being turned into a coffeehouse which was operated by Richard Charlton in the mid 1760s.

The element that interests me most about this location is that in October 1765 this is where there was resistance against the Stamp Act which had been imposed by the British Parliament. And as it was a coffeehouse, this is where the centre of gossip would have been, where chat took place about the state of politics as well as where business was transacted. So, on this spot, debate raged about the impositions that the British were placing on those living in Virginia and the locals stoked up division in some Daily Mail sort of way.

Back to the Stamp Act though, a ridiculous piece of legislation which meant that most documents issued in Williamsburg and across the colonies would have to be published on paper from London which had been embossed with an official stamp. Not only that, but this paper had to be paid for using British money and not the money that the colonists used. Local man Patrick Henry had earlier on in 1765 given a speech against the Stamp Act in the House of Burgesses, but the situation got worse and protests broke out in the street. On 30 October 1765, a crowd harassed George Mercer when he was walking down Duke of Gloucester Street (which is the street I’m standing on in the above photo) as they wanted to know whether he would become the Commissioner in charge of enforcing the Stamp Duty tax in Virginia. Not content only with chasing him down the street and onto the porch of the coffeehouse, the locals then burnt an effigy of him. Mercer had a little think about this whole arrangement and decided not to take the job of Commissioner, which seems a very sensible call to me.

Anyway, although the building here might not be original, the location where all this happened is authentic and this is a piece of American history that I’ve only really read about before.