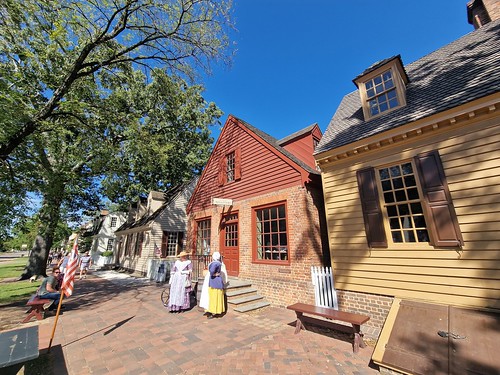 With some period reenactors standing outside, this is an original building, known today as the Margaret Hunter shop. She established her business here in around 1770, making hats, cloaks and fans, remaining here until her death in September 1787. I understand that she came to Williamsburg from London in the late 1760s and she established some wealth, whether before or after arriving here, and it’s known that she ‘owned’ at least six slaves. She also faced the challenge of trying to ensure that the products she sold were fashionable, with trends in Virginia often reflecting the latest on-trend look in London.

This is the problem that they had with the restorations, namely that buildings had been so changed and faffed about with since the colonial period. It’s hard to picture this being the same building as the one in the top photo, so when they refer to it as “an original building”, there’s a lot of artistic license in that. It also took a lot of research, primarily from newspapers and old documents, to work out which building was which given what was left. I can imagine a lot of historians have spent many hundreds of hours trying to piece all this together over the last century.

This is what the house looked like in the 1930s after the restoration (so, just as it looks now really) and it can be seen just how many buildings had to be recreated as part of the Colonial Williamsburg project to complete the street as it once looked.