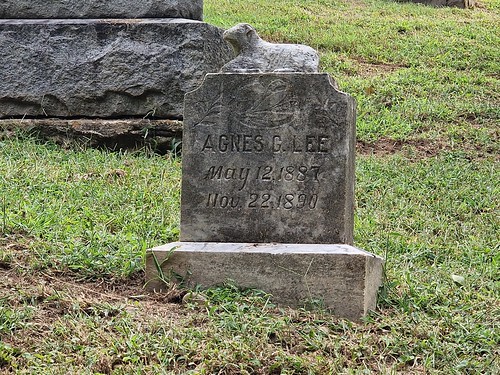 I can’t offer anything on this other to note that Agnes Lee lived between 12 May 1887 and 22 November 1890, dying at three years of age and then being buried at Hollywood Cemetery. The average life expectancy, from birth, in the United States in 1860 was just 35, although by the time that Agnes was born it had increased to 41, but that’s still a lot of deaths in early life.

So why is there a blog post about this? Well, primarily as I liked that little sheep (I assume that’s what it is) on the grave, it’s quite an emotive image and it made me wonder what the family must have thought when standing there in 1890. And, also, because time was so incredibly cheap at that point in time of Richmond’s heritage, not least meaning that information about Agnes seems to have been lost to history.