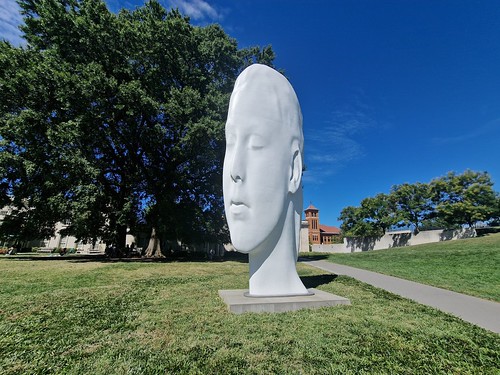 I accept that I did say that I had finished writing about the Virginia Museum of Fine Arts, but I forgot this sculpture outside. But this will be the last post…..

Chloe was cast in one piece, which is in itself quite staggering given that it’s 24 feet in height, designed by the Spanish artist Jaume Plensa (1955-). It’s designed to always have a calm expression from whichever angle it is viewed from, giving the onlooker a feeling of peace and tranquility. Plensa is also the designer of the Crown Fountain in Chicago, which I might go and visit if I remember. The artist and the gallery gave great thought on where to place the artwork, settling on this spot as having the best light and location. Its size certainly makes it noticeable and at least it’s clear what it is, not some odd piece of rock which is meant to represent something that it looks nothing like.