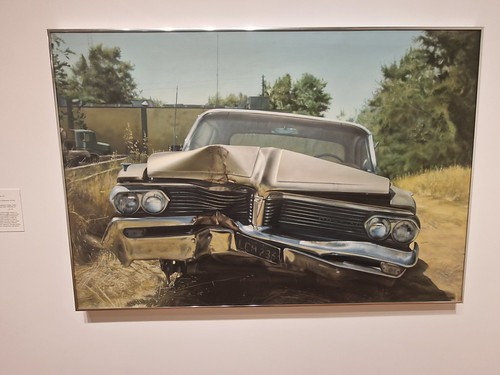 And continuing with my theme of my favourite artworks in the Virginia Museum of Fine Arts, this is a painting by John Salt who I have to confess that I hadn’t heard of. Born in 1937, he died in December 2021 and has a pub named after him in London which is something that I’m very impressed about. He was an English artist and his works are based around photo-realism and I had to get close to this before I realised that it wasn’t a photograph.

Salt went to Baltimore to study in 1967 and although he intended to return at the end of his course, he remained in the United States until 1978 when he came back to the UK and settled in Shropshire. I’ll use the gallery’s text about this artwork as it’s better than anything that I could write:

“Although bathed in strong California sunlight, this scene could be from almost anywhere in America. While Salt clearly delights in the play of light on glass and metal, the directness of the image addresses classic themes of waste, destruction, and even mortality, as the abandoned car, in human terms, has finished its life span.”

The gallery bought this artwork in 1971 after it was painted, funded by a grant from Sydney and Frances Lewis. It’s another example of an artwork that just shouted American at me, which felt extra appropriate from an English artist. It’s also got something of a haunting feel, a car left to be scrapped and no longer of use.